Last week’s trip to Amsterdam prompts me to revisit one of my pet rants.

The surface of cycle lanes in Brussels.

There was lots of cycling on cobbled streets in Amsterdam and in Brussels. I like a nice cobbled street, even if it does play havoc on a small wheeled folding bike. Cobbles are part of Belgian cycling folklore, you can’t be a Flandrian icon without that background as a hard man of the pavé. So I’ll forgive the truly diabolical state of repair of the cobbles in what is supposed to be the capital of Europe.But why, oh why do so many Brussels cycle lanes have to be made of tiled surfaces? It’s an awful surface, effectively a pavement for bikes. And mostly built beside smooth, welcoming tarmac. 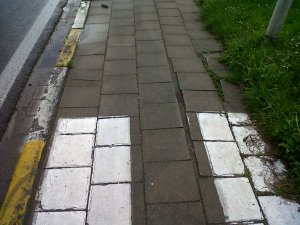 Harder to ride on, difficult and expensive to maintain, really unwelcoming.The most frustrating stretch I have found was on Avenue de Tervuren, the Tervurenlaan. Direct cycle route all the way to Brussels, nicely segregated from the main road. But every bone in my body wants me to move to the welcoming tarmac beside me rather than stay on the tiles.

This looks really inviting, doesn’t it?

I am house hunting out here at the moment but the idea of this being the first 5km of my daily commute is a bit depressing.It’s not as if there is a design standard that stops them.

There are much better examples – to the north of Brussels a new section around an industrial estate and to the south in Walloon Brabant a lovely smooth descent through the rhododendrons near Chateau de La Hulpe which is more common out in this province.  Critics will say that it is deficient because it isn’t properly segregated, but frankly this is supposed to be the transport of delight, you shouldn’t need to be hard man of Flanders to bike to work. 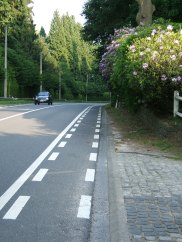 A welcoming cycle lane on road to La Hulpe