Christmas Eve was one of the few times since I started working in Belgium that I have been for a bike ride that was “just a spin”, a proper touring ride through the local lanes.

Previous rides have almost all had a purpose – exploring areas to live, visiting houses and more recently plotting routes to work or to local services. I feel as if I have been waiting weeks for free time to coincide with some gaps in the rain or snow and it just happened to be the afternoon of Christmas Eve.

I decided to cut though the lanes in the general direction of Waterloo, partly because the network of roads look interesting on the map and also because I wondered how much I could ride around the historic site of the 1815 battle.

It was really refreshing to be pottering about and with time to take some photos. When I returned three impressions were left on my mind.

Firstly I was good to be moving at bike speed through the villages and hamlets rather than by car so I could enjoy the vernacular architecture glowing in the winter sunshine, especially the white painted farmhouses which dot the fields and the solid brick churches marking the village centres.

Battles are not really my thing but I want to know more about my new home and the Battle of Waterloo is by far the biggest deal in this region, undoubtedly one of the most pivotal battles in European history. The main Waterloo battlefield is actually south of the town itself and include the communes of Braine L’Alleud and Lasne while the events leading up to the battle stretch many kilometres away to Wavre and Genappe, right across the area I am now living.

I was first aware that I had hit the battlefield proper when I came across the first of many roads named after the troops and leaders of in the battle. And then bouncing across the cobbles and potholes I looked up from my concentration on the road ahead to see the Butte de Lion, the huge pyramid -like mound built by William 1st of the Netherlands to mark the event. 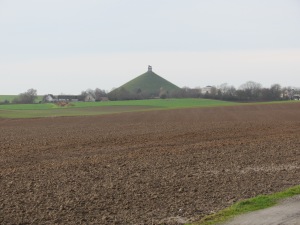 It isn’t the most attractive memorial in the world but it is certainly a major landmark in the surrounding agricultural landscape which only dips away gradually. At least around its base there is only a limited amount of tourist exploitation while the older buildings mark their association with the flags of all sides and not much other adornment. 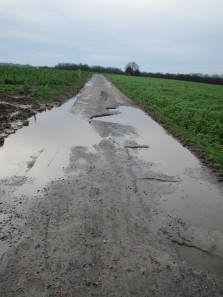 However the thing that really struck me was that I could ride right up beside the monument and then head out across the fields on my bike, I am sure in most countries this would be closely guarded and only accessible by paying customers. Alongside the path were interpretation boards in multiple languages which set out the main features of the battle. I was able to swing across the ridge defended by the British against the French cavalry charges accompanied by several joggers and the car we collectively pushed out of the mud in a burst of international collaboration. 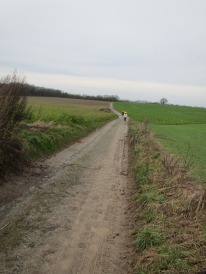 So I can mark that one down as somewhere to bring cycling visitors with an interest in history, a bike is a really good way to move around the big area covered by the battle and get a sense of the topography.

Ah, but there is a catch. My third and final discovery was the state of the roads in this direction. I may have moaned a bit about rough cycle paths earlier in the year but for the first time on this trip I hit some of the real stuff, proper domed pavé with deep ruts down either side. Front lamp lasted about a minute before it had to be removed but the rest of the bike and I rattled bumped and bounced all over the place with little semblance of control or momentum. Only a relatively short section fortunately but it caught me by surprise.

Later I tried my best to imitate Tom Boonen, going full bore down the centre crest on a similar section which seemed to work better but it was tough keeping it going and no fun at all when momentum was lost. A few of the minor roads are theoretically smooth now but when the tarmac wears away the thinly covered cobbles are exposed and make impressive potholes, a tricky combination after all the wet weather.

In other areas the cobbling is more decorative, in fact it looks like it is used as a sort of traffic calming because many of the road junctions and village entrances had short sections in just the right places to discourage car speed. These more modern sections are relatively tame for a cyclist and in general the drivers show a lot of respect to cyclists, certainly better than in Brussels.

All in all I loved my return to pottering about the lanes and the discovery of the countryside, the history and even those cobbles. I look forward to much more, but for the moment I was refreshed for Christmas.