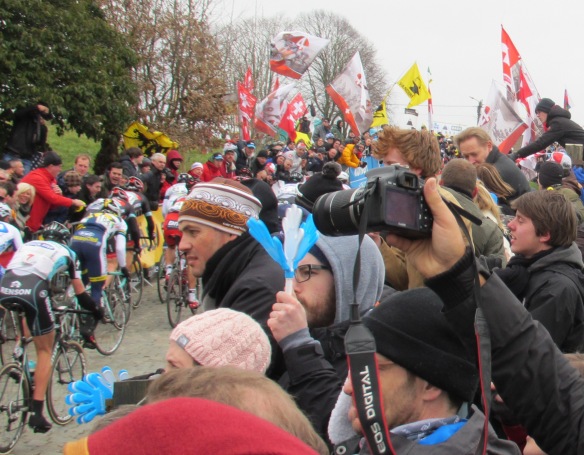 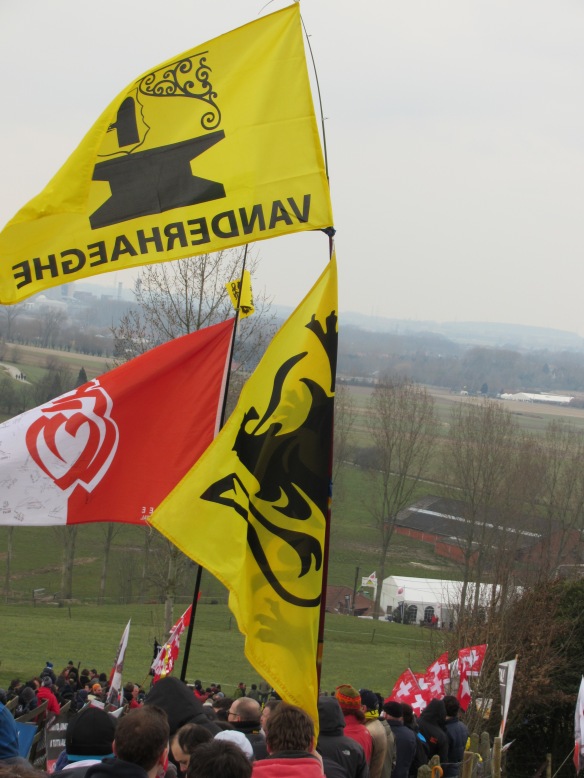 This is the second of my Tour of Flanders updates, this time focussing on the fan experience, what it was like to be by the roadside for this celebration of all things Flemish.

For my post on the race click here. The final post will be a little touring post about my first experience of riding through the Flemish Ardennes. (And next week we start again with Paris Roubaix!)

As I said yesterday a big thank you to Vincent Meershaert who told me The Paterberg was one of his favourite places to watch. I don’t know why but it really didn’t ring a bell with me beforehand, I knew about the Oude Kwaremont, the Koppenberg and the organiser’s controversial decision to leave the Mur de Grammont out of the route.

Only on final research did I discover that the Paterberg would be the key climb, the last before the finish. However as we approached the apparent spot my father and I cycled up to the hill on a tiny country lane and even when we were within the last few metres all we could see were a few cars parked on the edge of a field. I was really quite worried that I had got completely lost or that we had misunderstood the advice until we climbed over the ridge and suddenly looked down on a mass of people, barriers, flags, banners and tents sloping away down a steep hillside.

Then we understood why this spot would be the prefect vantage point in any bike race. The steep slopes formed a banked terrace with a chance to see the riders on the climb and as the road surface was not a sunken hollow so spectators could get right to the edge of the road on both sides all the way up and there were no embankments or hedgerows in the view. Pretty fierce hill, only 400 metres but 20% at the steepest point, averaging 13% and cobbled all the way. 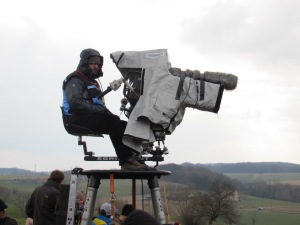 In addition the hill also looked out across the countryside as the riders swept across our view along the valley descent to the foot of the Paterberg. Belgian TV obviously knew this too because one of their fixed cameras was halfway up the hill and we could see the strung out peloton on TV several times from this key vantage point.

However all those things are just the physical setting. What made this such fun was the party atmosphere up and down the hill. The audience may have been majority Flemish judging by the number of beery conversations we almost had in Dutch but there were a lot of other voices present too.

Boldest, most colourful and definitely the most excited were the Swiss-Italian Fabian Cancellara fan club who had staked out their corner with Swiss flags, banners and posters fighting for position with the black lion of Flanders. 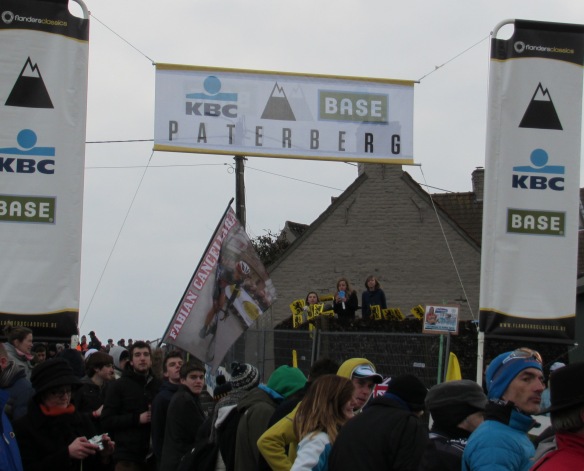 Beer and frites were in plentiful supply and I can vouch for the fact that the frites and mayo were excellent despite the prospect of a cold hilly ride putting me off the beer. It didn’t seem to put anyone else off though and as time wore on it certainly took its effect.

The other stars of the day were the residents. One house at the steepest point of the hill laid on novelty entertainment and music as two increasingly inebriated men in chicken suits managed to keep dancing for almost three hours.

And because the profile let fans get right up to the edge when the riders did come by it became funnel of sound, fans right up in the riders’ faces yelling and screaming. Maybe not all over the road like some Tour de France stages but because of the speed the riders flew up these shorter steep climbs it would have been a nightmare without the barriers. Even patting bums seemed to be in order here, but that could have been the effect of the beer.

A lot of very windswept happy customers left together at the end of the day to wend their way back to whichever field hid their car, bike or shuttle bus having shared the Ronde Van Vlaanderen experience.

Just a personal note to my Dad to close. Because you tipped Cancellara for the win doesn’t give you an automatic membership of the fan club. He does get carried away you know! 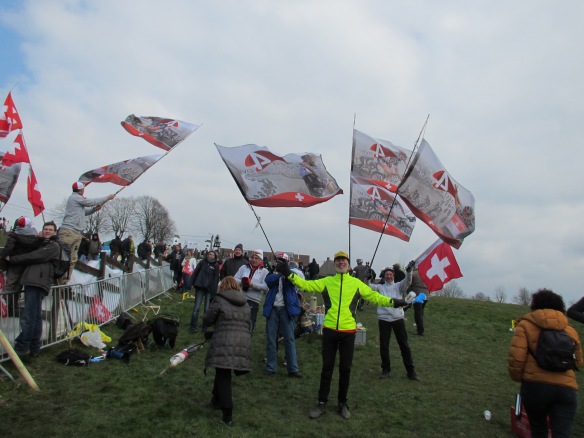 9 thoughts on ““I do not despair” experiences the Tour of Flanders (2 – frites, fans and chicken suits)”