I am so over winter already. We have had two wintry days here in Belgium. Last week, day 1, I fell off on the ice. Today, day 2, I arrived at the station like a soggy snowman.

Which seems a very good starting point for my final round of Stockholm photographs. Despite being mainly there on a non-cycling holiday I was of course very curious to discover how the hardy Swedes coped with the first snows of winter and sub-zero temperatures.

Benchmark for this sort of thing is considered to be the Danes who apparently set the record for cycling further and on more days of the year than any other cyclists in Europe. But in terms of cycle use Sweden is right up there in the first division and the city authorities in Stockholm have some ambitions to catch up with not only their Danish neighbours but also the other leaders in Sweden like Malmo and Vaesteras. 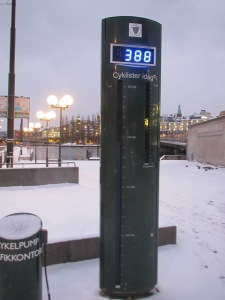 However I have to say that my impressions were really mixed which kind of matches what I found when I was there at other times of year, some things were quite well done and the cyclists who were riding seemed very confident on the snow. But I didn’t need to see the many parked bikes with snow on the saddles to tell me that numbers were well down. I could see it on the cycle paths and the cyclist counter by the town hall had counted a very sorry 300 riders by 9am. That might be good in a UK or US city with 1% mode share, but that is terribly low for an ambitious cycling capital.

So what’s the problem?

Well of course the competition is good, Stockholm’s metro is extremely good and well used. On a snowy day it is an easy option.

But the most noticeable thing were the cycle paths themselves and the behaviour of the riders. I think the paths had been swept, as had the pavements. But poorly, the snow seemed to be compressed to form a smooth surface as if the sweepers were compacting not clearing. Then there was a layer of gravel which is the ubiquitous snow topping for grip in much of Scandinavia because there is too much snow. But cycle tyres and even our walking shoes just went through to the slippery surface. 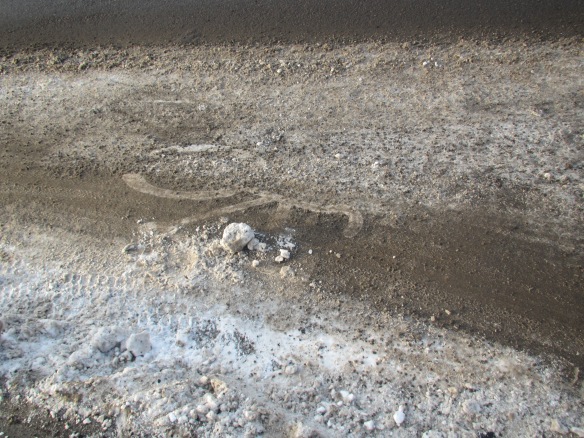 Finally the clearance must have been happening in the early morning before rush hour, but by the time we went out there was a layer of snow on top of the swept paths so the cyclists largely created their own channels in the fresh snow. 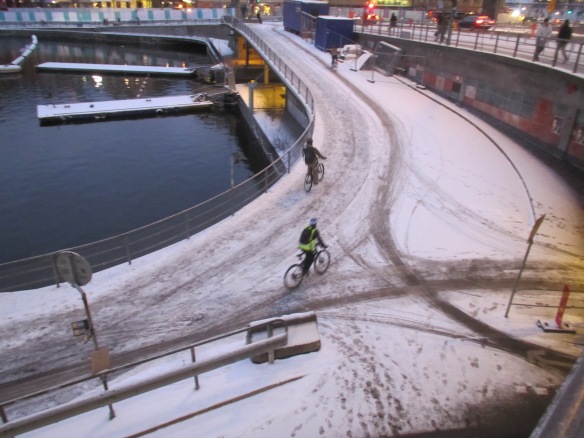 In those conditions I was perhaps surprised just how many cyclists were picking their way gingerly around the city. I could see clearly how lacking in confidence many were. On the first day I would say they were predominantly fit looking younger men but over the whole week we did see more and more older people and women coming out, however the balance was not what it was in the summer. 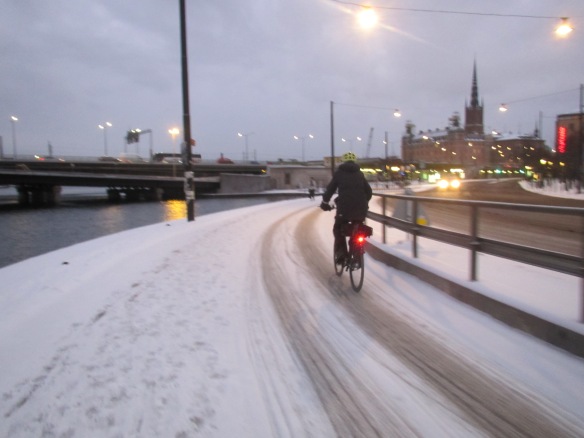 Would I have ridden on it? Frankly after a couple of recent falls and not bouncing as well as I did in younger years I seriously wonder whether I would have done. The sheer inconsistency of the surface beneath the snow looked seriously dangerous to me. Most likely I would have been riding because I would have sorted a bike with MTB tyres or studs. But without that I think I might have joined the rest of the sensible Swedes and taken the metro. Sorry Stockholm, half marks from me for the snow work.

But all credit to those who were out there, they did make some good sights in the snow. And it was certainly better than Wallonia or Britain!

8 thoughts on “Some Stockholm cyclists are hardier than me, despite conditions on the roads”