Some 16 years ago I was offered a job with CTC, the national cyclist’s organisation in the UK. For me the move was never a doubt once the offer was made. Yes we had some real challenges, I was stepping out of a business career that saw us swap a settled lifestyle in Cardiff to a much lower paid job in one of the most expensive places in England. But no doubt whatsoever about the move to cycling on my part.

Not so my old boss. When the the Chair of CTC’s board phoned my corporate boss for a reference he unexpectedly got his ear bent for nearly 20 minutes about how I was throwing away my career for a whim. And he made it pretty clear that he blamed CTC for throwing temptation in my path. He made the same point very clearly to me. The CTC Chair was extremely rattled and spent much of the next two years worrying that I had taken the job on emotion and I might soon set off back to my corporate life.

But of course my old boss had no idea about my deep connection to cycling and the irresistible draw of a dream job. But then again nor do some of the people I work with today. Because in our world of common sense cycling in European cities it really isn’t essential to be passionate about the sport or pastime of cycling to know what a civilising effect it has on a city. I heard this best described in Copenhagen. The city cycling officer said “In Copenhagen you get up in the morning, you clean your teeth, maybe some breakfast then you bike to work. Nobody thinks about having a club for people who clean their teeth, it’s just what you do.”

Well in my childhood cycling to school was still quite normal. But being a “cyclist” wasn’t. My trip back to Bungay was a chance to celebrate that with the people who made my cycling life possible, the Godric Cycling Club. I went back as the guest speaker at their Annual Dinner and prize presentation. About 70 people took over the local golf club, many of whom I have known since childhood, either my parents friends or indeed my own schoolmates from the 1970s. 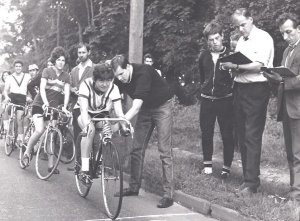 Close to my heart? My earliest memories are of being carted off to races at ungodly hours in the morning, waking up to ask if Mummy or Daddy had won. Even now my dad is the Chairman, my mum organised the dinner and there were enough relatives to have their own table, these really are my cycling roots. And the club itself has rocked from time to time, but when a glass of wine was raised to toast the founding members of sixty years ago it was brilliant to see several in the room.

As an after dinner speaker the job is of course not to overstay your welcome, entertain with some travellers’ tales and in my case throw in some anecdotes about the quirks of cycling in Belgium then get out of the way so everybody can get round to collecting their winnings from the groaning table of prizes and on to the raffle.* 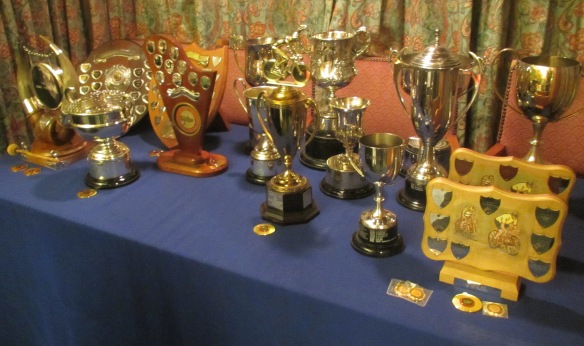 But as part of my speech I said roughly this:

I wasn’t such a great racing cyclist. I am proud that my name appears on at least one of these trophies, but my speeds were not exceptional. (“I’ll second that” agrees a voice in the room)

But this club gave me the opportunity to be what I am today. Firstly the club was always a supportive place to be, it let me go forward in another way. I got the chance to try out things that some young people never get to do. At 14 they let me be the club-room secretary, having the keys the club building, selling Mars bars and drinks or organising the table tennis tournaments in the winter.

At 16 I organised my first open race. It was probably so inconceivable at the time that nowhere in the rules of cycling did it set a minimum age for event organisers, so I just put my hand up to run one of our cyclo-cross events. These were chances you just cannot replicate.

And of course when I went on to university I got involved in running our cycling club, making friends for life but also filling my CV with more of those try-outs for real life that came with the territory. Discovering the stunning region in which we lived while the other students made it little further than the bar. Plan and lead group rides? Deal with bureaucracy? Plan cycle tours round France? But of course we did, it just was just the world I knew. And every one of those experiences enriched my CV and when at 23 I didn’t have a clue what to do I discovered that what I was really equipped for was something called management. I’ve been there ever since.

So now I have the unque honour of traveling Europe managing cycling programmes, talking about cycling, promoting cycling, meeting people who are battling to grow cycling in small groups in cities that often don’t really seem to care. Or put me in a Belgian cycling club where I don’t even speak the language. I know I am among friends. Because the Godric Cycling Club made that my world, a very comfortable place to be. I hope that all cycling clubs continue to give a next generation of young people that chance, the chance to grow up as individuals, not just as places where the only winners are the ones who go fast. That has made cycling so much more to me that brushing my teeth. Its what I do, it’s my people.

When I join a group of cyclists I do not despair.

* On the podium on the Champs Elysee after getting his trophy for his Tour de France win Bradley Wiggins, Britain’s first ever winner said “Are we going to do the raffle now?” Millions of spectators worldwide were completely baffled. About 30,000 club cyclists in the UK just collapsed with laughter, recognising just how many local cycling club dinners Brad must have attended during his career rise. One of us.

5 thoughts on “The start of a cycling life”