Recently I went to Utrecht in the Netherlands. My mind is still slightly overwhelmed by what I saw, so despite the delay I just had to post this. With a health warning. As I write this I have a feeling that any “normal” people discovering this blog will wonder how somebody could get excited about parked bicycles.

All I can say in my defence is that I have spent most of my life as a cyclist and the past 15 years in cycling promotion.  The scene at Utrecht station ranks as an extraordinary moment, I am still reflecting on it three weeks later. So maybe I don’t publish 50 photos of parked bikes, but I have to share.

In Utrecht I saw a sea of bikes. In fact no I didn’t, I saw an ocean of bikes. The visual impact of these walls of pedal powered machinery painted a picture in my mind that is hard to let go. 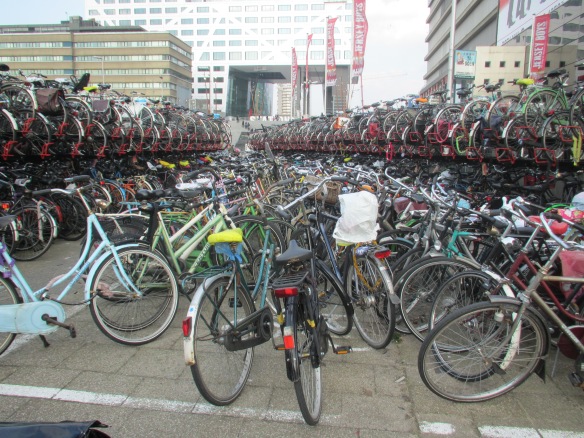 I was so astonished I decided to start at one end and time how long it took me to walk to the other end because I couldn’t take it in any other way. Six minutes. Enough said. We have to measure cycle parking here in minutes of walking time.

Only another 3 minutes to go

Let me explain the background to these impressions.

Because most of my work is supporting countries and groups where daily cycling is struggling my trips to the Netherlands are actually quite rare, despite its proximity to Belgium. This was my first time in Utrecht. That in itself feels almost impossible, everywhere you go on the international cycling scene there seems to be someone from Utrecht. It is the home of the Dutch Cycling Union, Fietsersbond, so lots of my colleagues come from here, but also there are city staff, Utrecht regional staff, university academics studying cycling and cycling consultants so Utrecht gets a lot of exposure and it features in a lot of study tours. Other bloggers wax lyrical about it. So I felt I should know it.

Utrecht can call itself one of the “capitals” of Dutch cycling culture with an amazing 50% of trips in the inner city by bike and 30% overall. In a population of about 300,000 that’s one hell of a lot of cyclists. The city centre itself was lovely, sleepily coming to life in the spring sunshine.

It was just full of bikes and people were meeting, studying and going about every element of life by bike.

Unfortunately my brief visit was not enough to see much of the city’s celebrated cycling infrastructure or the cyclist traffic jams at rush hour. However I was really pleased to cycle out to the Fietsersbond offices on one of the Blue Bikes on hire from near the station and Saskia, the Deputy Director of Fietsersbond took me around a little of the cycling sights.

But at the heart of the tour was the station, where many routes converge on this overwhelming sea of parked bikes.

Saskia showed me several more parks that I hadn’t even noticed in the morning. More people were measuring their cycle parking by time too, the time it was taking them to find their bikes. I can nearly bike to my nearest station in Belgium in ten minutes, I cannot imagine spending at least another ten minutes looking for parking. That’s like being a car driver! 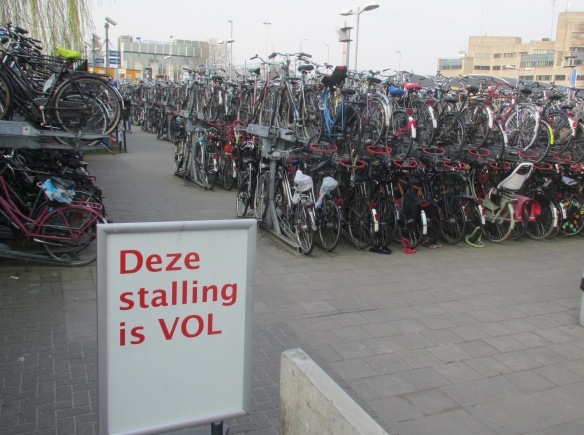 When we returned to the station it was approaching 5pm so the traffic on the cycle paths was beginning to build. The area is currently a massive building site so lots of the routes were temporary which apparently causes short term chaos each time a section is rerouted but the hordes soon settle down to the new pattern.

But this redevelopment will also create the jewel in the crown of Utrecht cycle parking. Part of it is the new city hall with all the civic functions in one modern building. And below the building is a pyramid of sorts, a ziggurat of concrete steps. And inside it will be the world’s biggest bicycle park. 30,000 bicycles moved to one location.

It is something I really look forward to seeing. I often tell city officials – “Whatever number of cycle parking places you think you need – double it”. Now I have seen Utrecht I suspect even 30,000 places may not be enough here. Because when I see this number of bicycles in one place I realise the extraordinary role cycling plays in this city.

However I have just one sneaking thought. Wouldn’t it be amazing to keep those bikes up on the surface as an extraordinary symbol of cycling? Possibly not if you are a city manager, but I felt privileged to see Utrecht’s sea of bicycles in such a prominent position before they disappear underground. I hope this post gives you a taste before they bury it!

26 thoughts on “Utrecht station cycle parking is absolutely astonishing. See it before it disappears underground.”