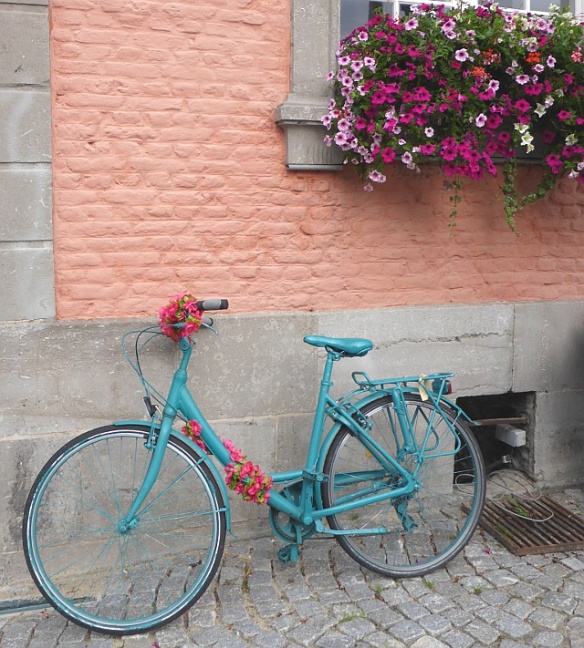 This was our first day riding together, very much finding out the pace and rhythm that would suit us both. It was also a really good taste of the Flanders Cycle Route because we were treated to a wide variety of terrain and some really nice towns.

In line with our relaxed approach the first kilometres were easy for me because they were on familiar roads, even though this part of Brabant Wallon with its steep sided valleys was probably the hilliest part of the whole ride. We quickly made our way across the Belgian language border into Flanders and soon picked up the long distance cycle route signs for LF6. I have ridden across here several times and my cycling club comes here regularly to enjoy the quiet rolling lanes. However we soon found that the planners had taken the promise of a quiet touring route very seriously by picking out the smallest of routes down tiny back lanes at every opportunity, for example sneaking in behind the houses in Huldenberg.

Our first destination was Leuven, Belgium’s ancient seat of learning where there has been a university since 1425. Embarrassingly I have lived in Belgium for nearly two years now and I hadn’t actually been into this nearby city with a great reputation for its historic buildings and attractive atmosphere. Despite the fact that it was just off our route this trip was a chance to put that right and we were well rewarded.

The centrepiece of the city is a riot of gothic architecture with the huge cathedral and the over-the-top city hall. 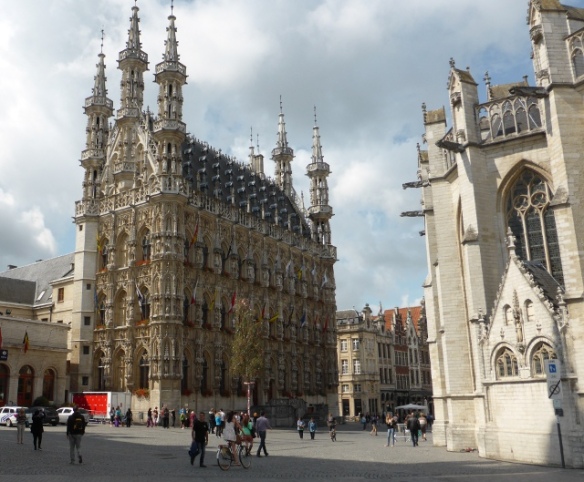 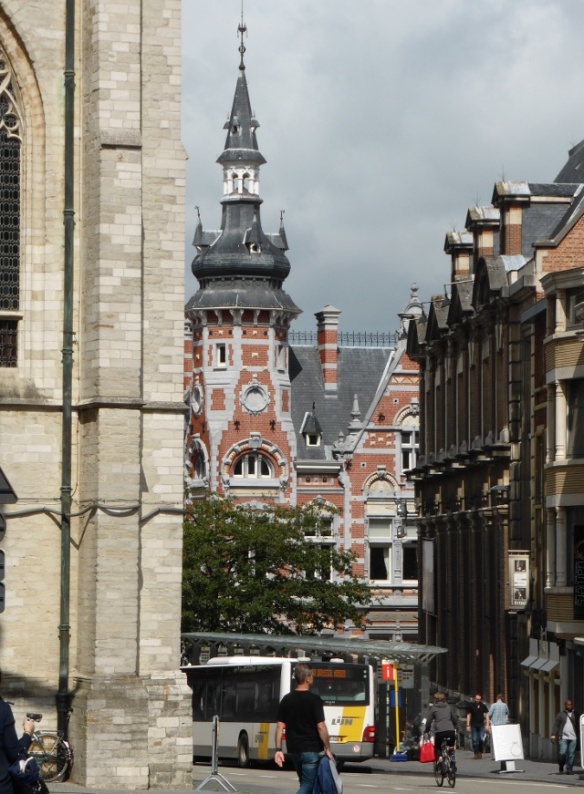 They are surrounded by open attractive streets and buildings with a great café scene.

The age of the buildings is a bit deceptive, many of these are 20th century reconstructions after the city was devastated in the First World War but there is a clear sense of being in historic centre.

The student vibe was very strong, not just because there were many young people out and about in the sunshine but because so many of them were on old upright bikes blending with the shoppers. This was certainly a contrast from Wallonia because there is just no bike culture like this in French speaking Belgium. The Flemish claim that if they were a country they would be Europe’s third cycling nation along with the Dutch and Danes. That becomes quite apparent in cities like Leuven.

This cheeky statue/fountain in Leuven made me smile, it represents the typical student pouring knowledge into his empty head – and most of it running straight out again! 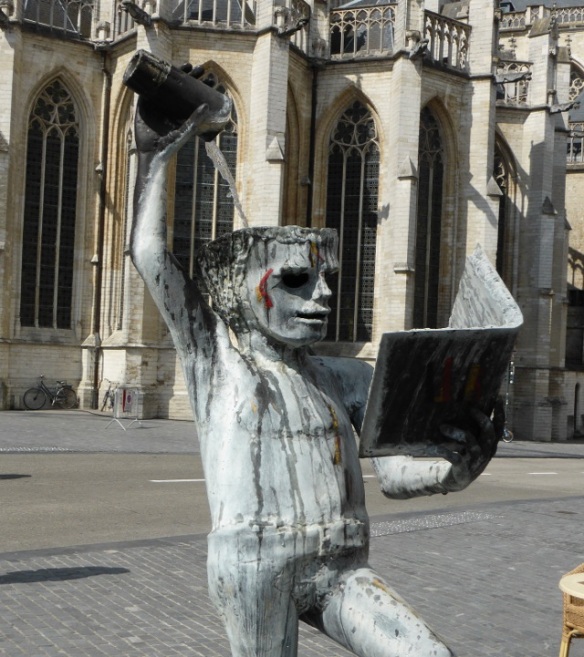 From Leuven we continued South-East and quickly re-joined the country lanes heading for the small brewing town of Hoegaarden, famous to beer drinkers as the home of a distinctive pale wheat beer, but actually a small market town with very little else happening, especially on a summer holiday weekend. Our main ambition was to get there for a late lunch before it rained which we just about achieved. When we were tucked up in the garden of the Kappitelhuys the skies just opened.

We sat out the immediate rain over a very nice plate of pasta and glass of the local speciality but there was no escaping that the rest of the day was going to be spent under overcast skies on wet, mucky roads.

However the riding was lovely because the roads started rolling through the gentle hills and orchards of the Haspengouw, Belgium’s fruit growing region.

The narrow concrete roads were also in much better condition than their equivalents in Wallonia which can be a brutal succession of poor joints, these were lovely and smooth.

The commitment to cycling was also clear when we entered the province of Limburg which proudly advertised that it was the Cyclists’ Paradise, Fietsparadijs

Our final destination was St Truiden, an historic m

arket town just off the main Flanders Cycle Route. Initially I thought we might have made a mistake because when we got to the edge of town there was a massive traffic jam but fortunately it tuned out this was just an effect of rush hour on the eve of a public holiday and the cars were trying to pass the town.

holiday shut-down itself. Unfortunately this meant that the Tourist Information office was already shut. However we were treated to remarkable public service by a local traffic warden who spent 5 minutes ringing around her colleagues to see if anyone knew of a suitable hotel. We were given a couple of options including a hotel just off the main square. I made a quick executive decision that Hotel Cicindra was just the place for us even if it was a few Euros above budget. The signs outside showed that it was affiliated to two bike friendly hotel networks and inside we were treated to a secure cellar bike store with a built in bike ramp on the stairs. Now that was a first for me. I mean it would have been rude not to stay when they had gone to such effort!

St Truiden itself was a great discovery.. The huge main square was surrounded by no less than three towers and around the town were numerous well-kept historic buildings. 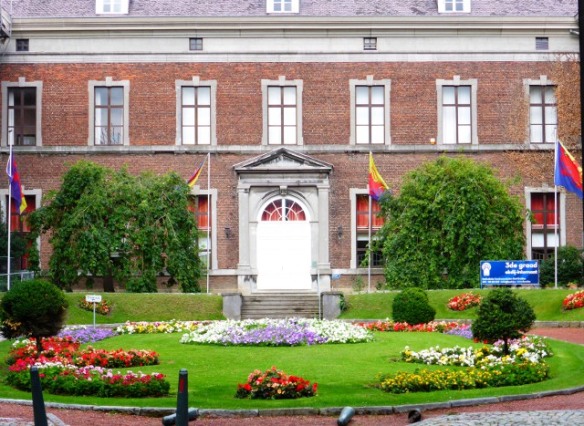 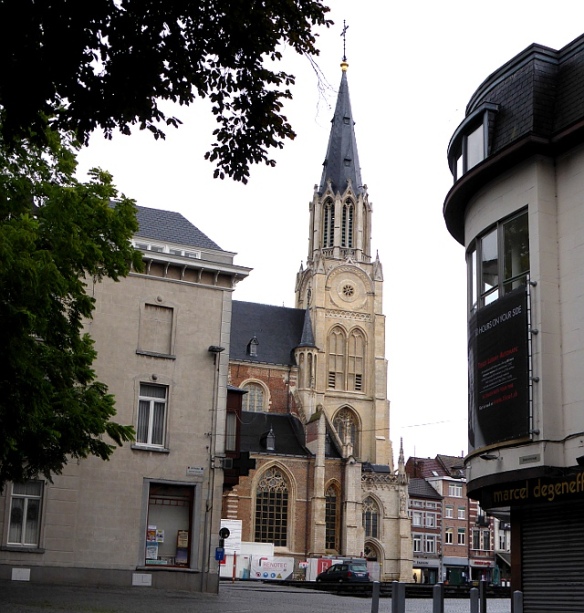 My favourite area was just to the west of the town centre where numerous older buildings were set around an attractive square and church. This was the Beguinehof, the place of the Beguines. This was a European women’s movement which spread through Europe from the 13th Century. It is believed it was started by the widows of Crusaders who formed an order of sisterhood on the death of their husbands. But unlike the orders of nuns they did not take religious vows and were free to leave the seclusion of the order. This movement continued in Flanders long after it had declined elsewhere in Europe and many towns and cities still have areas where the Beguinehof is a preserved area that escaped modernisation of city centres. I remember the one in Bruges being a lovely retreat from the tourist hotspots. Here in St Truiden the atmosphere was similarly tranquil. 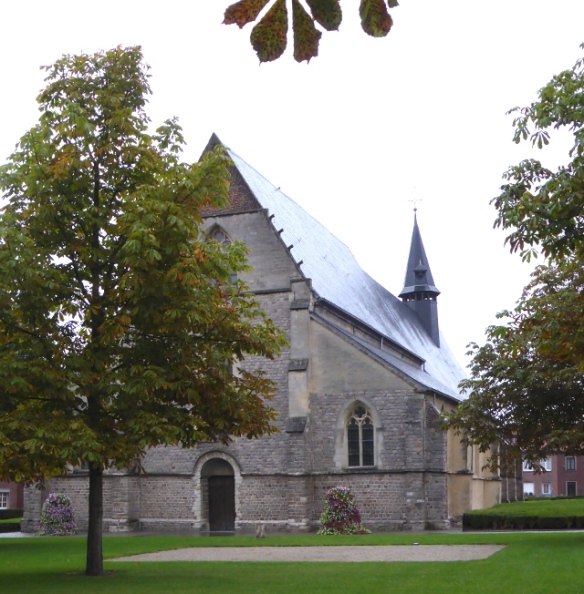 Like so many of the small towns I have visited in Belgium this was another quiet gem that had never heard of before I moved here and probably would never have got round to visiting except by cycle touring. So all in all a very successful first day despite the wet roads.