One of the great pleasures of travel is when you are given a totally unexpected treat.

I have just spent the week at Eurobike, the great bike industry frenzy at Friedrichshafen on the banks of Lake Constance. That in itself is a bike lover’s indulgence of which there will be more later. But this year I got a bonus.

As far as I knew our German colleagues had booked us into some sort of college near Ravensburg which was offering a good package for the week. I thought no more of it, and I had certainly not checked anything other than the directions when I arrived at Ravensburg train station.

When the taxi driver pulled up on the forecourt of a huge church complex overlooking the neighbouring town of Weingarten I was quite convinced I must have misread something, until I was warmly welcomed at the Conference Centre in the Benedictine Abbey and Basilica of Weingarten, the largest Baroque church north of the Alps and an important religious site for over a thousand years.

One wing of the former Abbey is now a training centre and conference suite for the Diocese. So that is why I found myself throwing open my room window to discover I had a view over a courtyard and the great dome of the Basilica, nicknamed “Swabia’s St Peter’s”. It may have been a bit cloudy and gloomy but the setting lifted me up after ten hours of train travel. 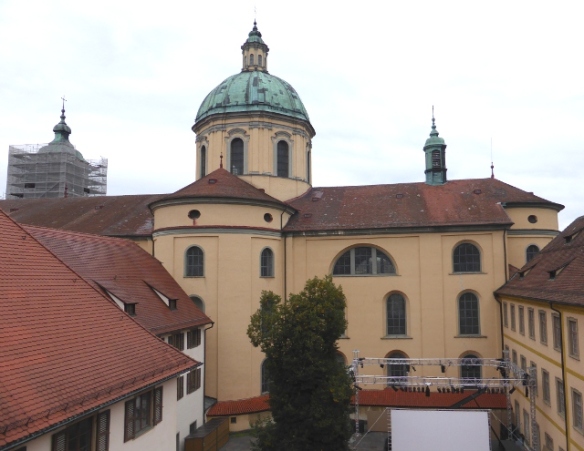 The next evening after work I was able to wander the grounds and discover more about where I had ended up, especially with the help of a little guide book I bought in the Basilica.

It was hard to step back far enough to get a clear view of the buildings because they were constructed on a huge scale and the Basilica itself was flanked by two large wings, each around a courtyard which would have formed the cloisters of the abbey when it was at its peak. From ground level this inner perspective was of one of somewhat severe and austere walls, probably not what it was like before its final phase of building in the 18th Century. 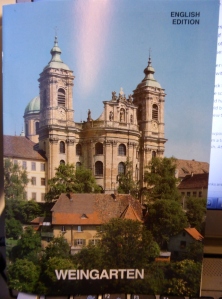 The only way to see its original style and scale properly was looking up from the town below. Unfortunately ugly restoration work and grey weather deprived me of that view this time so I had to rely on the image from the guide book to help me imagine it.

Looking out from that viewpoint at the front of the church I did have an excellent view down over the town itself, looking from a terrace that has been planted with vines to recognise the town’s name – “Wine garden” in English. At dusk groups of young people gathered here to chill out, have a beer and watch the sun set. 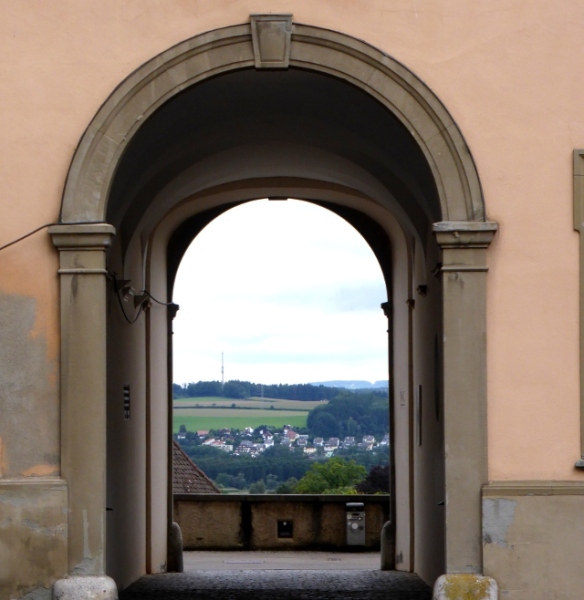 Inside the Basilica there is a totally different perspective. Firstly I could really sense the scale which I had found it hard to identify from outside. Apparently it is over 100 metres long and the dome goes up over 60 metres.

And there was certainly nothing plain about the inside, the white masonry made it seem light and bright and contrasted with the splashes of gilding and paint in all the alcoves and up onto the ceiling.

I have no particular religious affinity with any of the churches and temples I visit when I am travelling but particularly in Europe these buildings are a vital part of our landscape and heritage, it was a rare treat to be able to say I was staying in the “spare room” at the Weingarten Abbey.

There is however a footnote to my tale.

One of the nice features of my first night was to see the courtyard in front of my room being used as an outdoor cinema for the town, a great setting with a nice atmosphere, towers above and bats flitting around. It is apparently a summer season feature of Weingarten and a nice symbol of the multi-functional use of the complex by the regional government who now own it.

But the volume was incredibly high and I did wonder to myself just how long they might be going on when I wanted to go to bed. It was nice when it stopped, but only then did I appreciate that the cinema sound had to overcome the church bells which rang out every 15 minutes. We had a discussion later amongst our group whether they actually continued all night; the lighter sleepers were convinced they did. From the third floor, not so far from the bell tower itself I can categorically say they chimed 12 times at midnight and for sure they were going again at 5.30am.

I think we have to assume that the bells are part of the setting. Personally I am not complaining, but I am not so sure about some of the others!

Further post-script – last year’s accommodation wasn’t bad either – this is a great area to visit. Click here for more about my stay in Ravensburg.

2 thoughts on “My Eurobike hotel room – in Weingarten Abbey, Church and Shrine of the Holy Blood, Weingarten, Germany”