At a Velo-city Taipei conference full of colourful characters there is little doubt that one of them almost stole the show, mostly by not being there. 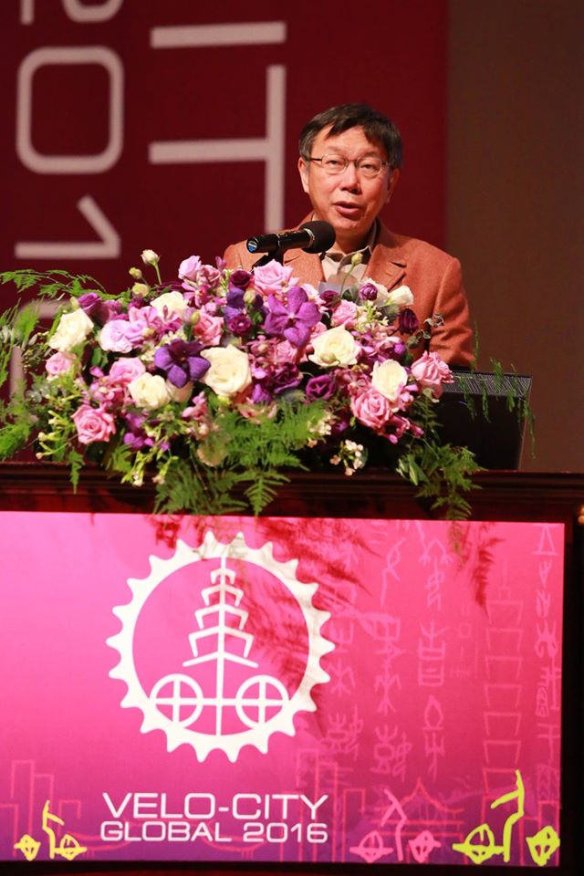 Elections for city mayors can occasionally throw up some characters who can be described as “individual”. Mayor Ko seems to fit the bill, but on this occasion he threw down a challenge to suggest that he could be the world’s number one cycling mayor. Like many others he is putting place more bike lanes and Taipei has expanded its bike share scheme on his watch, but that doesn’t explain why this mayor is different.

In the run up to the even he was on all the posters as the face of the international event, quite sensibly riding a Taipei public bike sharing Youbike in his day clothes. 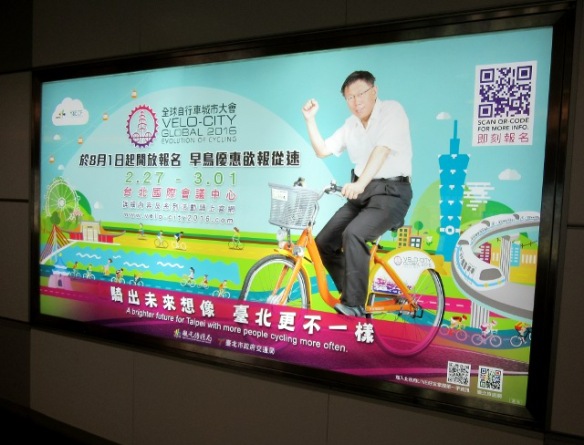 However we got a glimpse of the other side of his cycling as part of the conference pre-publicity when he set off and rode over 300km south from Taipei in a single day. That was a ride to impress the whole of the cycling constituency on the island, and most of his visitors. When asked how he felt he confessed in the media to a sore backside!

To my external view he is a man who seemingly has little time for the formalities of office, never in the business suits preferred by most Taiwanese politicians and keeping his speeches short and informal. He almost seems uncomfortable being the centre of attention, a very strange characteristic for the mayor of a major city, but a style that seems to maintain his “common touch”.

We were treated to the full Ko effect. On the evening before the conference opened he made an appearance at the Mayoral Reception but made the shortest of speeches of welcome and left shortly after the tea ceremony for the guests. 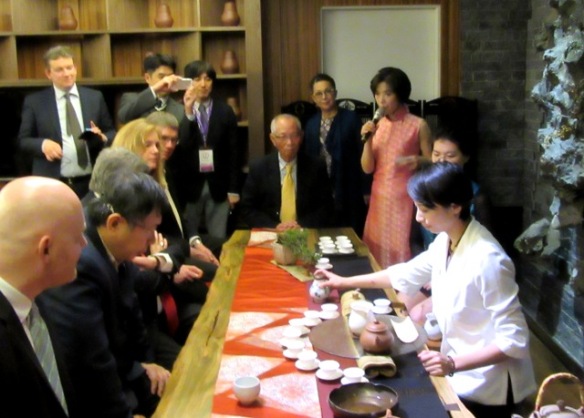 The next day however he had gone missing, we were only treated to the Deputy Mayor at the official opening ceremony. Why? Because Ko had decided to up his contribution to cycling by riding 520 kilometres from the northernmost tip of Taiwan to the most southerly point, a route that is far from flat. I rode just 150 kilometres of that route last year and I find it hard to imagine doing a ride nearly 4 times that length, non-stop.

Next day at the bike parade he was once again the talk of the town. He was late, and said to be annoyed because the 580km had taken him 28 hours instead of his planned 24, hardly a drop in his average speed. That is a great ride Mr. Mayor.

He did make it to the Velo-city closing ceremony where he again showed brevity and just a slight discomfort in the public eye, but there was a warmth in his manner whenever he talked about his cycling, even via translation. 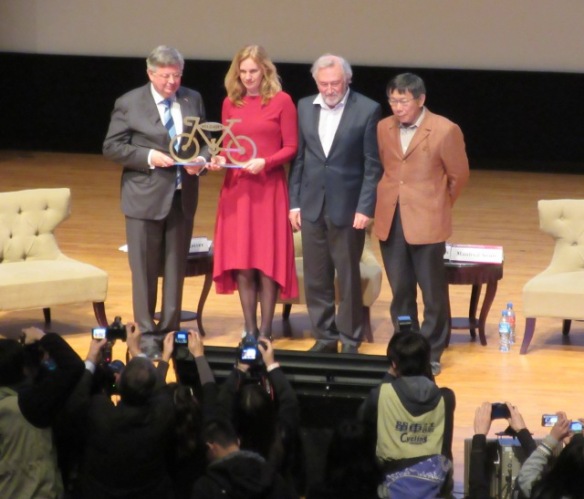 I am in no position to judge his place in the politics of Taipei, indeed at least one critical news article suggested that doing a stunt was a distraction from Velo-city. But that does not change the fact that in our map of cycling Mayors from around the world he certainly stands out!

2 thoughts on “Where might Mayor Ko of Taipei City sit in a league table for “cycling mayors”?”