I wrote recently about last year’s visit to North Cyprus when I was looking at the potential for more cycling with some of the local cycling promoters and supporters.

That write-up was dominated by the relationship between mountains and coast, the physical backdrop that made me conclude that this could be a great cycle tourism destination.

I am also pleased that I had a little bit of time and guidance to explore just a few of the historical and cultural sites around Kyrenia and Nicosia. In a quiet time for my 2016 cycling travels these photos make a nice gallery with some fond memories.

This village set in a wonderful position looking out to sea from the hills above Kyrenia/Girne is home to the Bellapais Abbey, the ruin of a monastery founded in the 13th Century.

I went there twice, firstly though my own navigation and then I was treated to a lovely evening out when Serife and Hüseyin invited me to the Bellapais Music Festival, a series of evening classical recitals in the floodlit Abbey. It was very atmospheric listening to the music in the high vaulted ceilings. 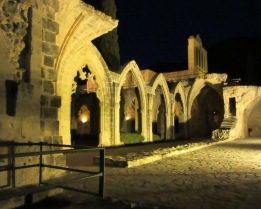 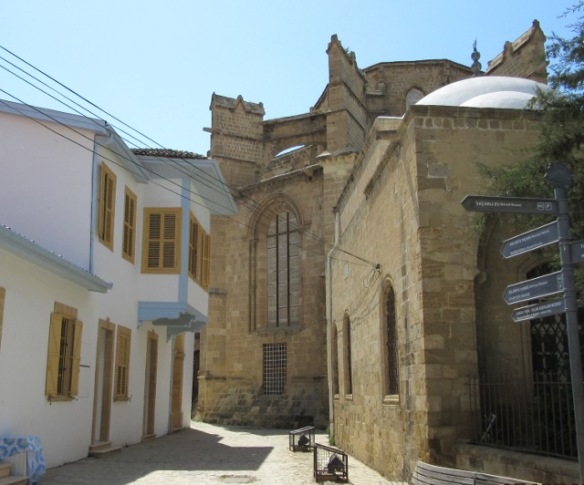 With the partition of the island of Cyprus the capital city of Nicosia was also split by the so called “Green Line”. On the Northern side the old centre within the historic walls is the main tourist draw with pedestrianised streets around the market streets and historical buildings.

This building is considered one of the real highlights of the city and it has been restored as a combined cultural and arts centre with craft shops, cafes and cultural activities. It was actually quite cool and calm, I suspect its history was a lot more hustle and bustle. 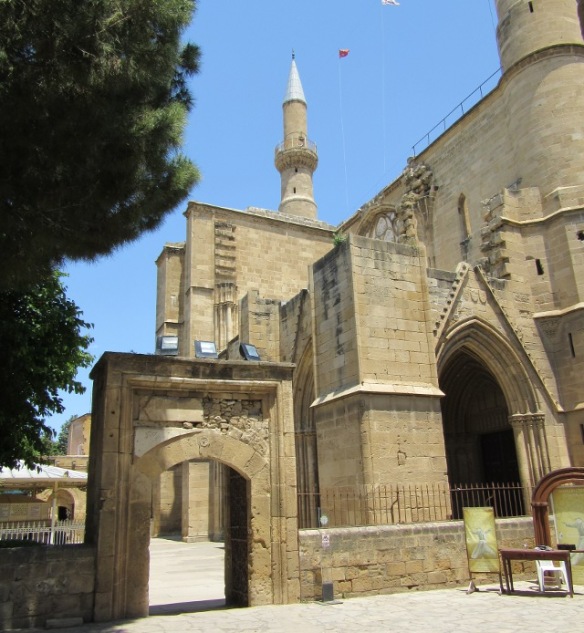 Nearby was a building that had an unmistakably Christian feel to its architecture, which was a correct assumption for the former St. Sophia Cathedral, but now it is Selimiye Mosque, the chief religious centre in Northern Cyprus. It was open to the public with arts and crafts activities taking place inside.

The surrounding streets were a real maze, even more confusing because we could turn one corner and the place would be deserted, as if in a ghost town and then in the next moment there was a bustling market. I liked it and I would happily have explored more given time.

Well it wouldn’t be Idonotdespair without checking in on the catering would it?

The food was not complex, but absolutely delicious because it combined obviously fresh fish and salads and meat with a lot of grilling.

And an entirely new experience for me of a barbecue restaurant where each table has its own plate of hot coals under a grill and the staff bring plates of meat and vegetables for cooking. And of course always thrown in was the hellim, (halloumi) the distinctive cheese of Cyprus that can be grilled and cooked like meat, absolutely lovely. I brought lots of cheese home to further celebrate my thoroughly enjoyable few days in North Cyprus.