It is not possible to compare my writings with the professionalism of the journalists and photographers covering the Olympic cycling and the energy of the blogging and twitter posters. And my little camera may be good for the blog – but it can’t cope with an Olympic athlete at speed or the size of a stadium.

So instead I am going to post a few personal reflections, things I enjoyed so much about the Olympic Cycling Road Races and Time Trial last week and my visit to the Olympic Stadium yesterday for the athletics.

I have ranted elsewhere about my disappointment with the poor treatment of cycling fans in some aspects of the ticketing but I have to say now that attending the whole thing has been an organisational delight. The national cringe that somehow we would blow it because of transport, weather, surliness or lack of service has been completely disproven, everyone I have spoken to has been unfailingly positive. Yes there were the early tweets about lost bus drivers for athletes but look at it in the context of the numbers who have experienced something they will remember for a long time.

Welsh comedian Max Boyce became famous in the 1970s as a populariser of Welsh rugby fandom. His catchphrase was “I Know ‘cos I was There” – a celebration of watching live. Now I can say “I know ‘cos I was there” for the Olympics, a most extraordinary celebration.

And in case it gets lost at the bottom of the post let me say that the thing that really made the Olympic Park special was the extraordinary attitude of the staff and volunteers in their purple uniforms. Whoever it was that said to them “be an individual” deserves the Knighthood that will go to some of the athletes because this group of all ages, all ethnicities and classes were still going late into the evening with cheerful banter and smiles. When did you last leave a public event where the crowd spontaneously felt the need to say thank you and wave goodbye to the stewards? 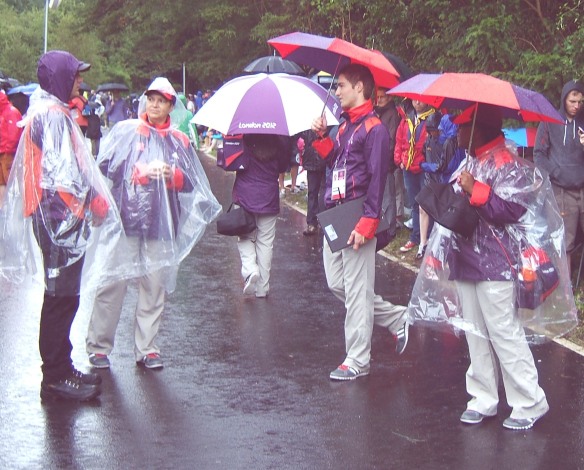 So four events live for me.

Ever since the Olympics were announced for London I knew I wanted to be out at Box Hill for the road races. I was actually born in the shadow of the hill down in Dorking and although we moved away when I was very young I have memories of trips back from time to time. The whole ticketing fiasco annoyed me but somehow or other I would make it. I actually got tickets for the women’s race in the end which gave us access to the hill itself on Sunday. We watched the men’s race at the bottom of the hill in the village of Mickleham which was also on the main circuit of the race so we could see the field nine times and sense the whole race unfurling. In both cases we made a frantic dash for the big screen at a nearby winery – not as fast as the riders heading back to London but certainly quick enough to see the finale of both races.

On Time Trial day off to Kingston upon Thames to get some pre-race atmosphere and then just south to Surbiton to find a relatively quieter spot and great views of the riders where a friend of my brother was also offering a dash to the TV after the event too. We were in high hopes – expecting medals for Bradley Wiggins and Emma Pooley, but also enjoying the way time trials can unfold in a very different way to the road races. Perhaps one for the cycling nerds, but I am happy to be characterised that way if you insist. To round it off I had some fun riding down the course with my son before our 30 mile ride home. That was fun in itself, we got applauded on some sections and one cyclist couldn’t help but join us and start chatting about the result. The mood was extraordinary. With over 20 gold medals in the bag now it’s almost impossible to recall that last Wednesday the nation was holding its breath because we hadn’t got there yet despite some near misses. Wiggins and the rowers were like a collective release of breath that let everyone celebrate.

And yesterday we got to use the two tickets that I got from the Olympic lottery. If readers are not from the UK you may not be aware of the national fixation with the tickets, but I applied for 22 tickets across 5 sports and I got two, actually better than many people did. Colleagues in Brussels were amazed by the idea of people effectively taking thousand pound gambles, but mine came up with the Olympic Stadium for athletics.So to follow over the weekend three photo and reflection posts – the road races, the time trial day and yesterday at the stadium.