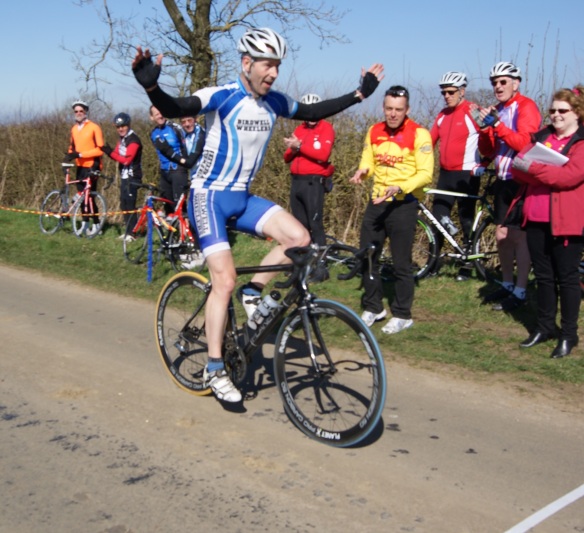 Even those who don’t follow cycling as a sport recognise the victory salute of a winning rider as he or she crosses the line, preferably having dropped your breakaway companions and soloed to the line with time to sit up and do the full arms raised salute. Someone may even take your photo in victory.

A much smaller number of people know what that actually feels like, even within the sport. I never did it in about 20 years of racing and I am pretty sure that I am not going to now. Oh sure, I dreamt it a few times and I have certainly felt like I lived every pedal stroke when cheering a favourite rider to a win on the TV. But to actually feel it? I wish.

So full credit to my brother Trevor. He still races to a high standard in the UK and in his 50th year he set himself the goal of winning a road race. He has accumulated a whole range of awards and trophies in time-trialing in the past few years but said his season’s goal was a road race.

Well he only went and did it in the first event of the season.

As the report of Leicestershire’s Fleche Waltonne says:

The wind played havoc in this race and after only 1 lap the field was significantly strung out. A break of 5 established itself quite early containing Paul Caton Trevor Mayne and Karl Moseley amongst others. Mike Twelves attacked from the pack to try and bridge to the leaders , and got within 10 seconds of them before reinforcements from behind came up , these riders included strongmen, Andy Eagers and Jon Stephenson. Eventually, a very strong group of 6 were well clear of the rest.

In a move that was a copycat of the A B race, Trevor Mayne attacked in Walton village with just over 1 lap to go. Trevor, an expert timetrialist, pushed on alone to a fine victory by around a minute and a half.

All credit to him. And putting any sibling rivalry aside I am not only very proud of his successes, but in this instance more than a little envious – because that’s the way to do it.

The only cautionary note is that having completed his season’s target in the first month of the year his excuses for avoiding DIY tasks have significantly diminished. Peaked too soon maybe? However I clearly need the training, so I’m off out on my bike. Maybe I need to practice my victory salutes a bit, just in case.