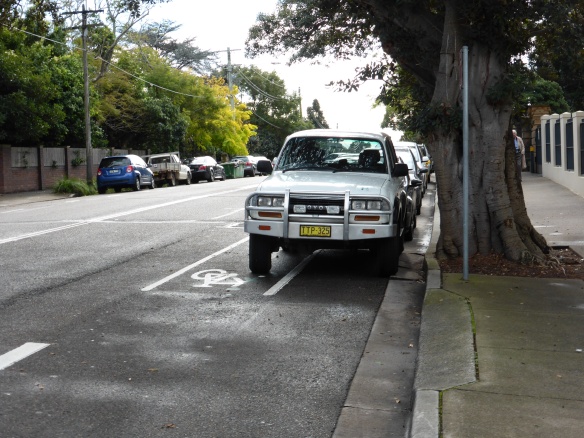 I Do Not Despair is about being positive about cycling, travelling to places by bike and enjoying the company of cyclists.

But sometimes I just see things that make me ask “What were they thinking?” In Australia I had some great rides but I found many examples of cycling facilities that seemed spectacularly ill-conceived and designed.

In both Melbourne and Sydney the most common example was “dooring zones” and in Melbourne they were joined by “part time” cycle lanes.  They probably have some other official term in the minds of the people implementing them but these were my phrases, although I could have called them a lot worse.

I think they fail the test for cycling provision in the most important way of all. They are of absolutely no benefit to anyone – there is no “design user” and as far as I can see no road safety benefit at all. In fact even worse, these sorts of facilities create user conflict and badly educated cyclists which in the long run makes the cycling experience worse for everyone else.

Highly experienced vehicular cyclists don’t need them because they are confident riding on roads and should be riding out in the middle of a carriageway to protect themselves from close passing cars. New or less confident cyclists get absolutely no benefit whatsoever because they offer almost no psychological or real protection from busy traffic, leaving the cyclist exposed and afraid. And if that is the case they are a surely waste of public time and resources? 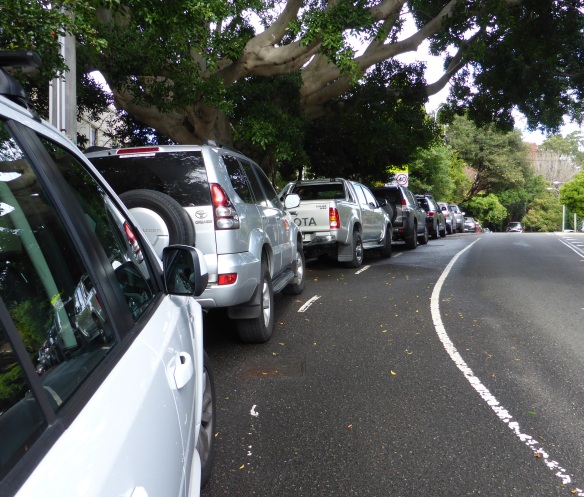 Let me take the “dooring zones” first. During side chats at Velo-city and even more in my reading of Australian cyclists social media and blogs I kept coming across lots of comments about “dooring”, the highly dangerous practice where a car user opens the door of a parked car into the path of a cyclist.

Most regular cyclists know about this one.  I have had it happen twice in fourty years of riding and got away with minor injuries but I know of some horror stories. And there is no doubt dooring plays on your psyche when you ride again, indeed many people never go back to riding, but after a near miss or two you learn to keep your distance.

I saw one or two examples of bike lanes outside parked cars in Adelaide, but generally they were wide enough to allow the user to ride well outside any risk. I couldn’t really understand the high profile concern about the subject among the Aussies.

Then I got to Melbourne and I was astonished to see with “dooring zones” on my very first day and subsequently I saw them all over the place. Then on many of the roads I cycled in Sydney they were like a plague and of consistently dangerous designs. 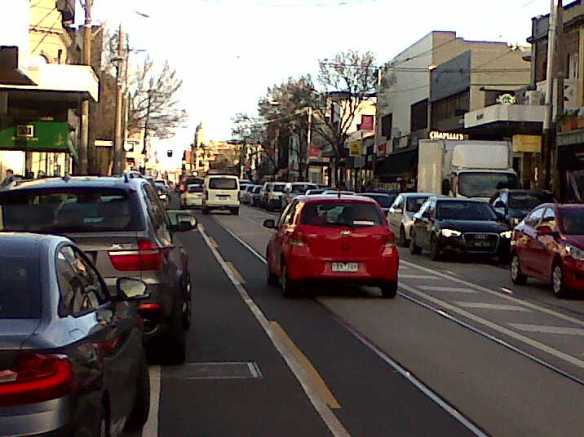 In Sydney I didn’t only find a defined cycle lane outside the parked cars, in most cases the bike lane was just a parking lane, only slightly wider than usual. This means a great space some of the time but an unpleasant slalom course around the parked cars that are present most of the time, again risking the ire of motorists on the main lane who don’t know how to interpret my moves when I had to pull a bit wider round the vehicles (which was most of the time.) I got shouted and hooted at a couple of times. No pictures? Sorry, too busy surviving.

No wonder this is a major topic among Aussie advocates, these are appalling, almost to the point of being lethal. Why motorists and cyclists alike have not succeeded with legal cases against the councils involved for causing risk and harm to road users is beyond me.

Putting a bike lane right up against the side of parked cars, and indeed allowing it to be further narrowed by cars parking badly is an official signal to cyclists that this is where they are supposed to be, despite the fact that this is completely and utterly wrong practice in every sense.  And to compound the problem any sensible cyclist who avoids the risk of dooring by moving out into the main lane is seen by motorists as being “in the wrong place” invoking further antagonism between users. It could only be worse if this were somewhere like Belgium where the bike lanes are compulsory.

I even found one dooring zone retained on the roads when a reasonable quality separated lane cycle lane had been built adjacent, so somebody must think they a continued place in cycling. I don’t get it. 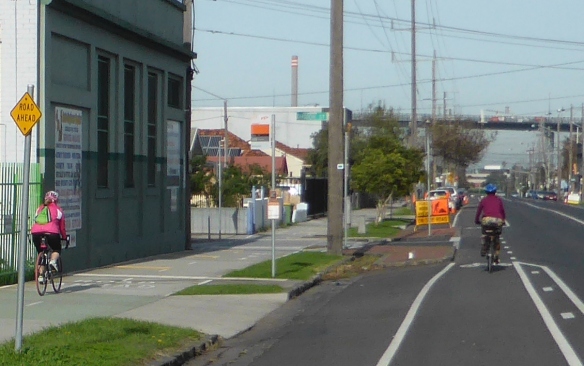 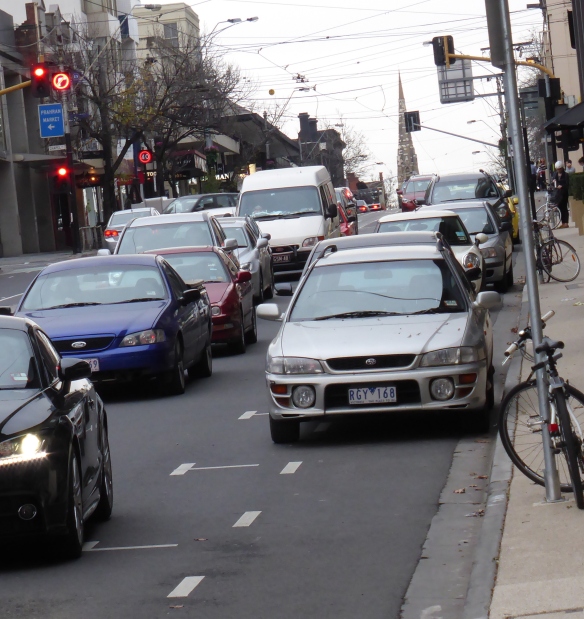 Crazy design number 2 is the part-time cycle lane. I first discovered these on Toorak Road in Melbourne. At first couldn’t work out what I was seeing, I could see a cycle lane but it was covered in parked cars. So naturally I assumed this was an old fashioned parking enforcement problem, a lack of political will to enforce the rules. Ok we all get those, but this looked particularly bad.

Then I saw a sign that said the parking was prohibited at rush hour, opening up a third lane on the inside of the road and enabling the cycle lane to appear. As if a magic rabbit has been drawn from a hat the cyclists are now welcome and indeed encouraged on this road, but only if they are prepared to take on two or three lanes of rush hour drivers who are the real and intended beneficiaries of the removed parking. 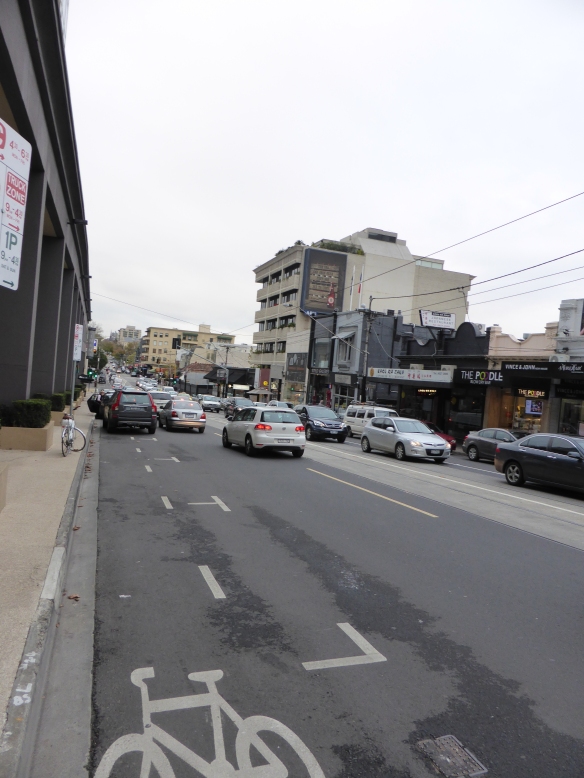 So in the eyes of the transport planners there must be two presumed states of cycling here. There is the 22 hours per day cyclist who needs no cycling facilities. And then for 2 hours per day these poor lambs suddenly are given a bit of paint and a metre of the lane. This is of course complete and utter nonsense, cyclists don’t just exist two hours per day and they don’t need bad protection in rush hour, they need good facilities, or continue with none at all. These stupid lanes were just no use to anyone.

As far as I could see they were sensibly being ignored by the few cyclists using these roads who were generally confident and took the whole lane to keep themselves safe from motorists trying to squeeze by.  I saw nobody who I could categorise as a less confident cyclist. The photo below is a perfect example. 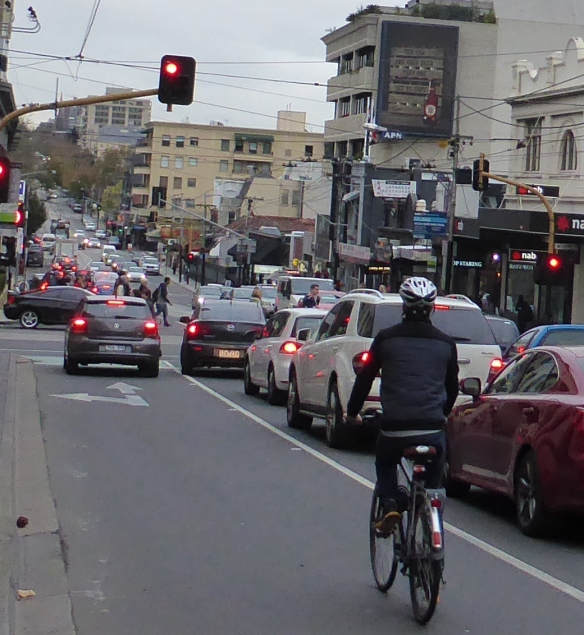 I would regard the positioning of this cyclist as exemplary for this sort of multi-lane road. But look ahead and his lane disappears actually into nothing, while underneath the cars there is a paint line that supposedly will push him to the left during rush hour. Useless and dangerous.

I know there are many out there in cycling advocacy who have become absolutist about cycling facilities and will condemn any and all cycling facilities without complete segregation as useless. I don’t share that view, I see that cycling is growing where the relationship between vehicle traffic and cyclists is managed through a mixture of measures such as car free areas, cycle lanes, speed control, traffic laws and in some cases just culture. For example in other Australian cities and in the last few days in New Zealand I have seen similar cycle lanes outside parked cars, but they had much greater width, the passing cars had wider lanes and they were travelling much more slowly. I found the cycle lanes a positive support and they were being used by much less experienced cyclists than the lycra types and occasional hipsters in the big Australian cities. example here: 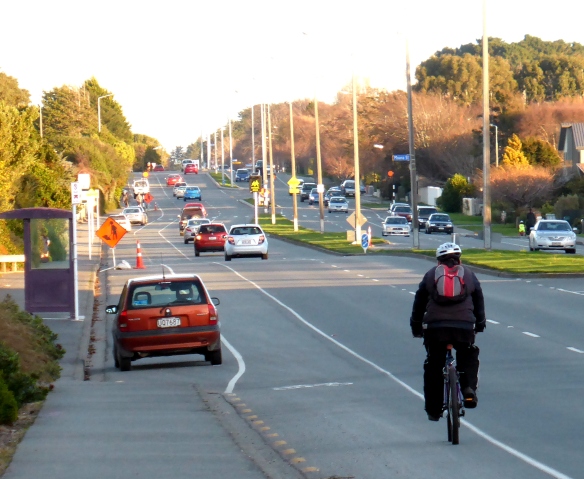 But I cannot see how anybody in Melbourne or Sydney could possibly better off with the dooring zones and part time cycle lanes I saw.

Sadly I believe they probably make the environment for most cyclists much worse. Some high quality facilities are being installed in the centre of both cities but it doesn’t take away the problem of what you have to ride through to get there, after all a safe cycling trip is only as good as its weakest link.

The question remains. “What were they thinking?” I do despair – sometimes.

Coming next “Cycling on Freeways”. Seriously.