It is the weekend before Christmas and we are standing in a historic rock fortress overlooking a Belgian city. Fantastic views across the river Meuse, even on a bleak day. This is Namur, capital of Wallonia, the French speaking region of Belgium. 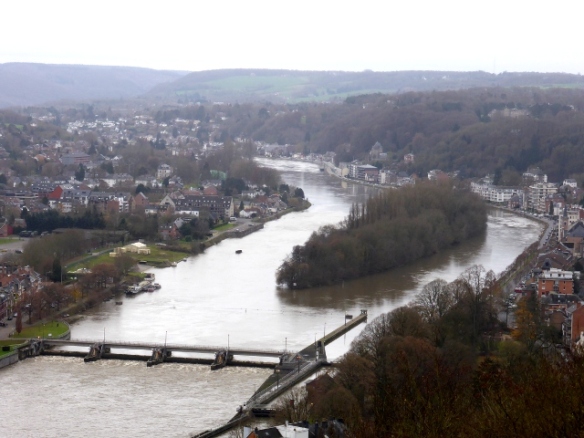 It would be a great place to visit on any occasion, but this Sunday we were there to sample another of the amazing venues that cycling throws up from time to time. 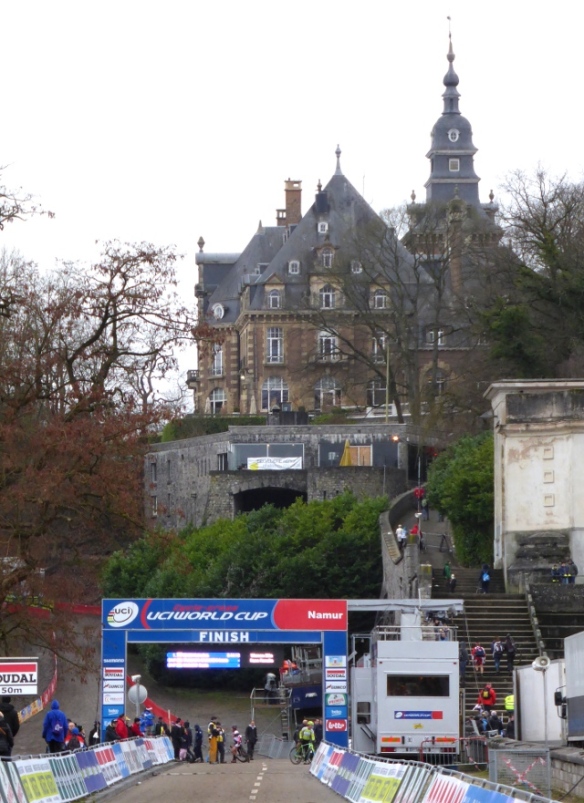 In 2009 it was decided to venture out of the Flemish heartland of cyclocross and hold an event in the spectacular setting of Namur’s Citadelle, the fortifications overlooking the confluence of the rivers Meuse and Sambre that have been here since Roman times. 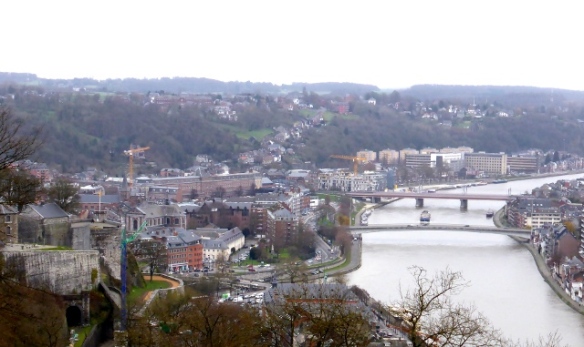 It was recognised as a classic and for the last four years it has been part of the UCI World Cup, attracting a top international field. 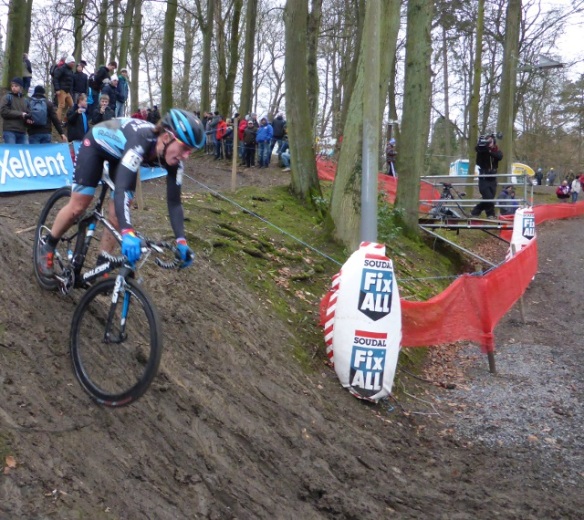 The steep slopes have been turned into a course that weaves around the fortifications to form a series of great viewing points combining steep climbs and drop offs, much more like a mountain bike course than many other cyclocross venues. 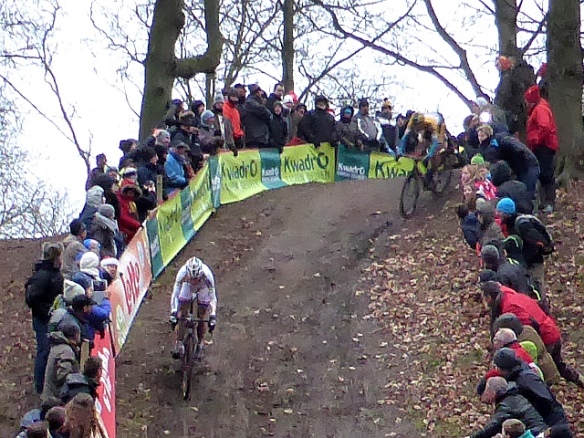 The organisers have taken the Belgian approach to cyclocross design, the course loops around constantly so there were almost always riders in view and in some places we could see six sections of the course at once with the crowd packed around these main viewing areas. 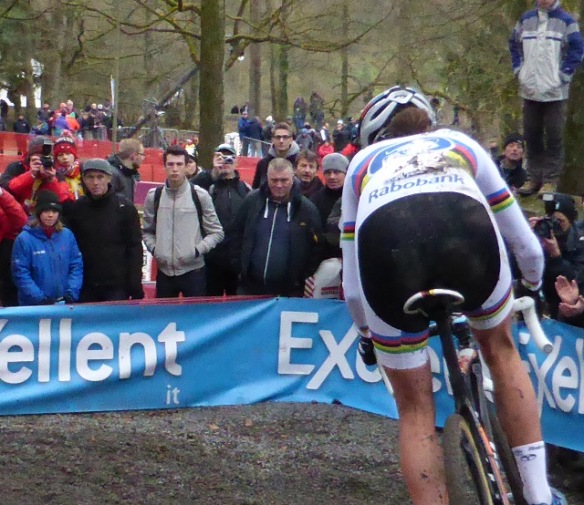 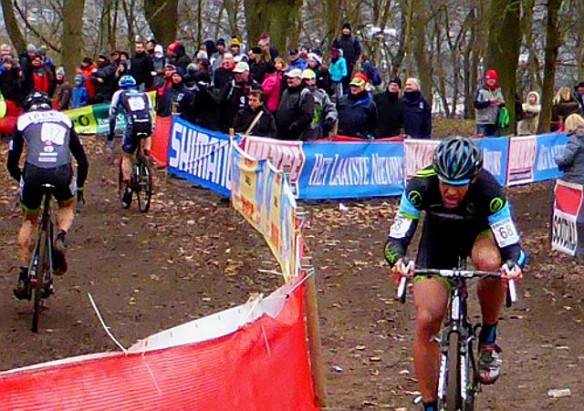 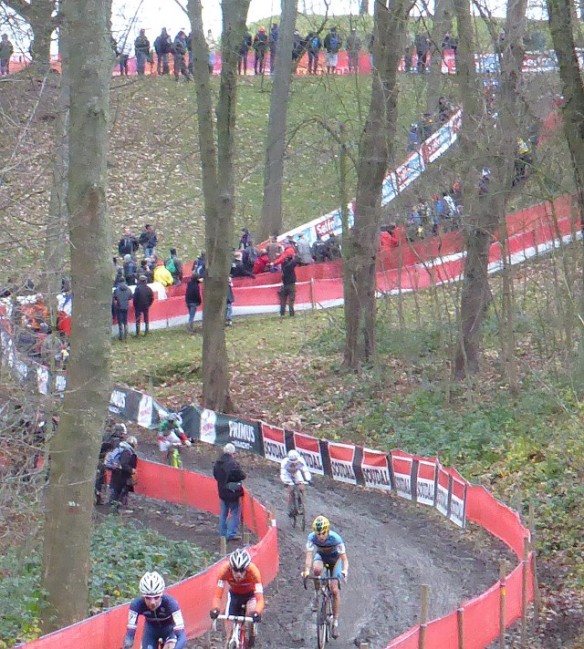 There was also down to earth practical help for spectators. How many other sports venues have one of these? 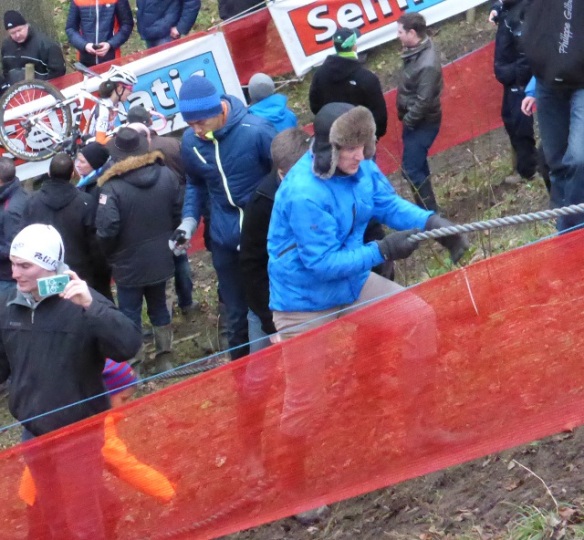 A World Cup event also means a more cosmopolitan audience than the usual hardened Flemish crowd, the international teams had also brought their supporters which meant we could pick out Spanish, American and Italian voices in the crowd among the Flemish (Dutch) cheers. Last year Francis Mourey from France won which also meant a very strong contingent from our neighbours to the south. 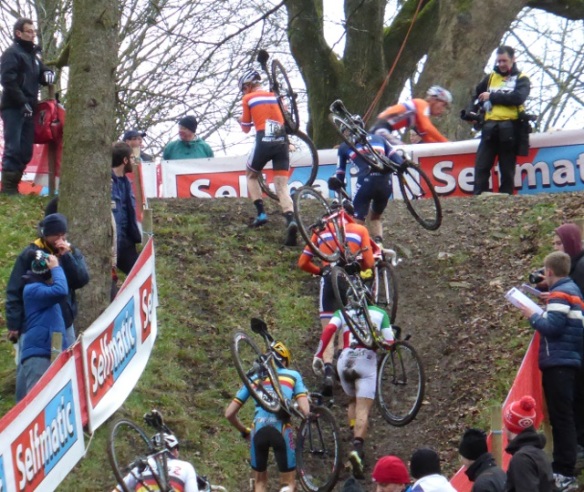 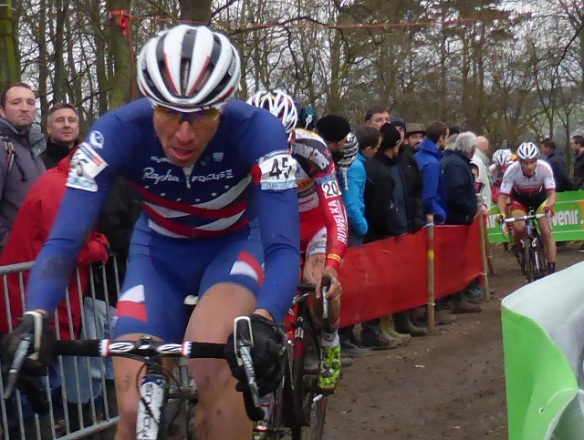 As a cycling fan it would be impossible not to get captured by the occasion. Seeing cycling here shows yet again that we are totally spoilt by the way our sport can take place in such great settings. Cyclocross is currently a bit of a niche but the number of countries running events is growing and the number of countries with top riders is spreading. The Citadellecross could capture the imagination of a whole new audience, it should be as well-known as Alpe d’Huez or a classic road finish like Mur de Huy. 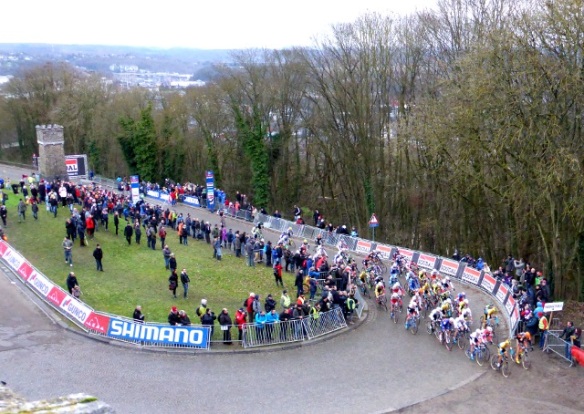 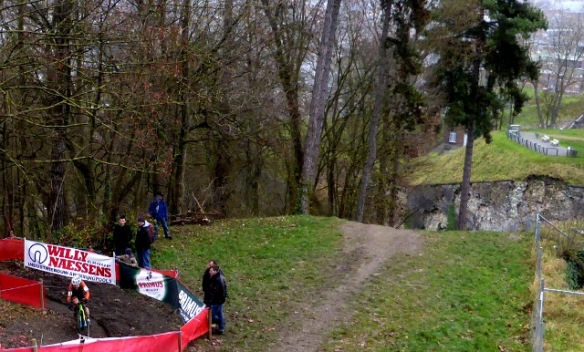 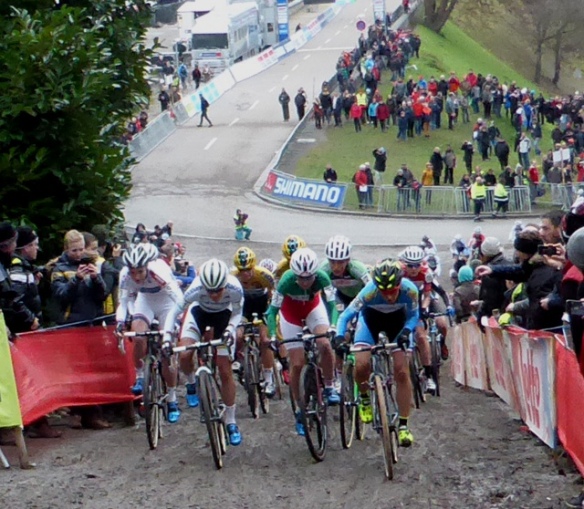 With this setting it probably wouldn’t matter how the racing went, but the icing on the cake was that we had some close and highly competitive action, helped by the conditions. Last Friday it absolutely chucked it down with rain all day and in places the course was a complete bog. 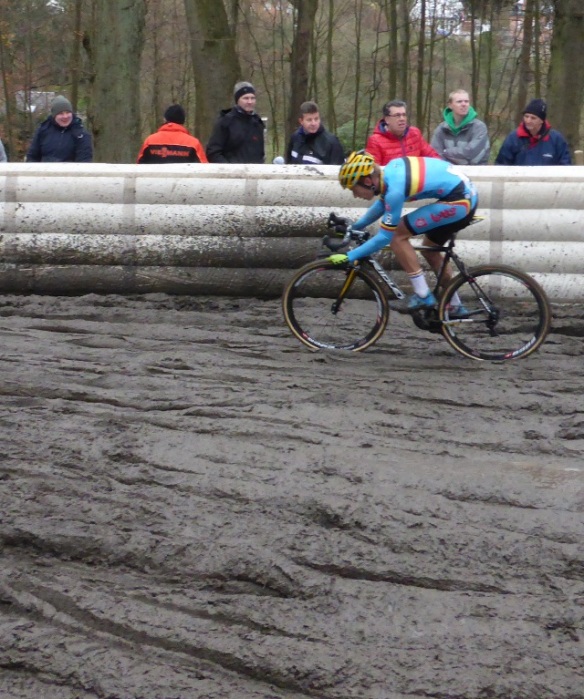 There were sections on the course I had doubts I could walk, let alone ride, especially on skinny cross tyres rather than big fat mountain bike tyres. 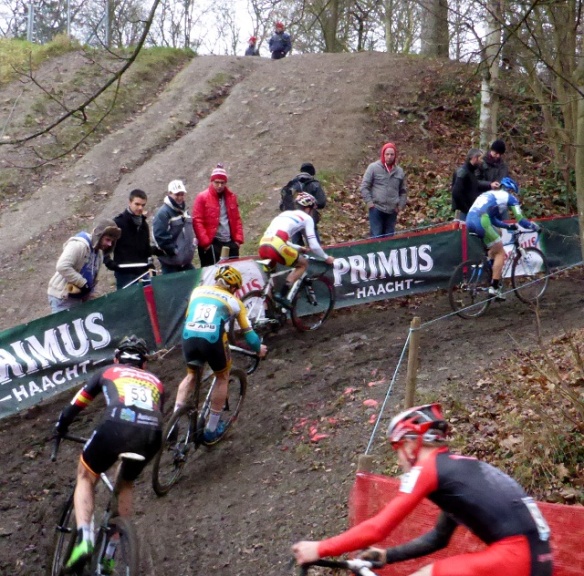 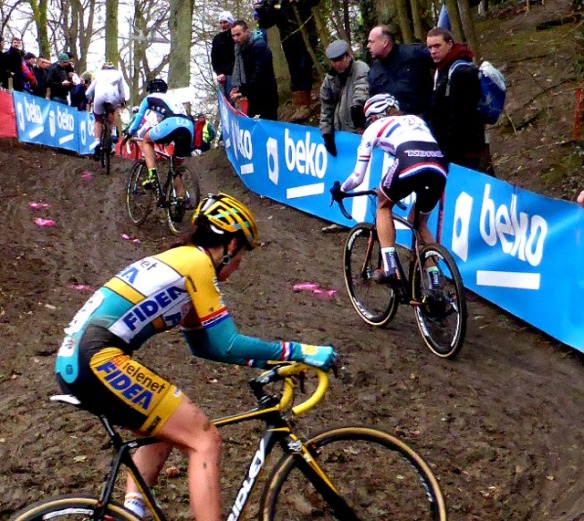 It was more than a little treacherous which is why we saw some of the very best riders in the world hit the ground and others looked more like gymnasts on bikes on certain sections. 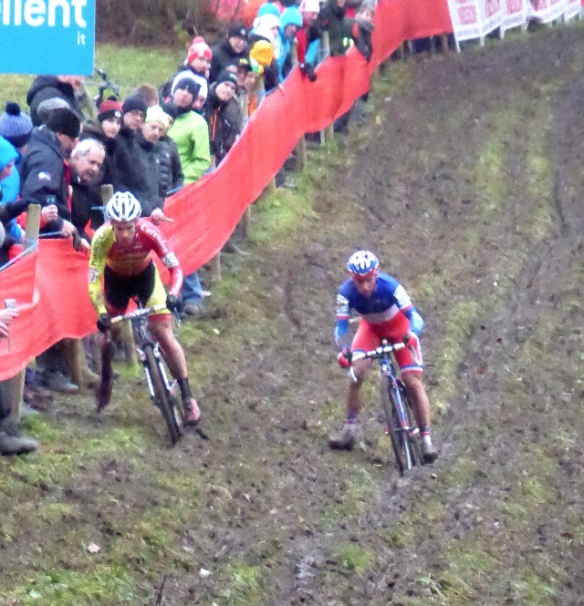 We were also treated to some of the very best names in the sport. The absolute superstar of women’s cycle sport Marianne Vos turned up for her first cyclocross of the season to race against the regular winners like Katie Compton of the US. 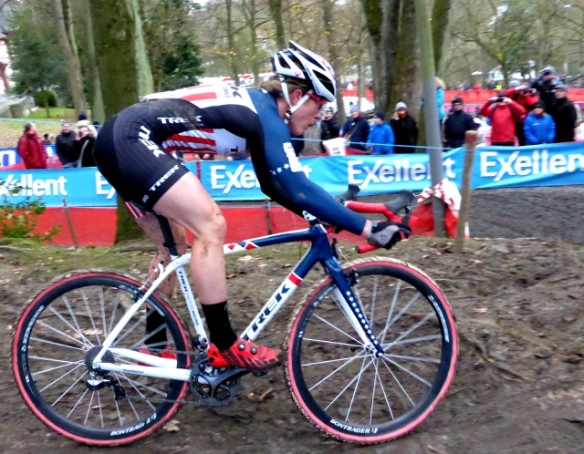 Vos almost managed to blow the field away in the first few laps. However she was not immune to a fall and seemed to run out of energy towards the end when she was caught and beaten by Katerina Nash from the Czech Republic.

In the men’s Under 23 race there are a trio of young guys who have been beating the senior fields all over Belgium this winter. Dutchman Mathieu van der Poel is already a junior world champion in road and cross and like his compatriot Vos it looked as if he was going storm away from the field. But after his own fall he was caught and passed by the Belgian star Wout Van Aert who has been almost unbeatable recently. This season’s new find Laurens Sweek the came up from behind until he fell himself to let Van der Poel back in for second. 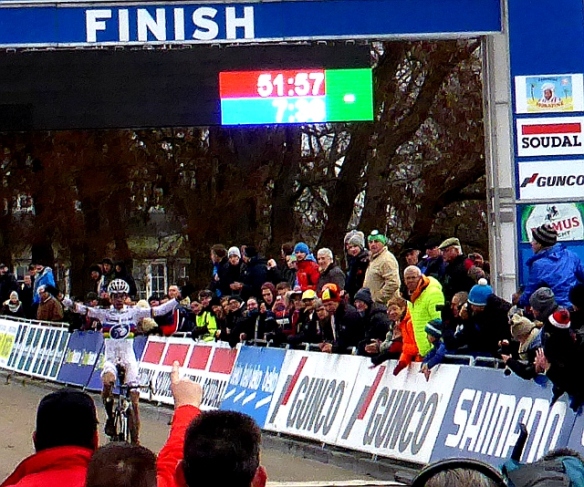 For many of the Flemish fans the most disappointing news came overnight when the old master Sven Nys dropped out but he has been having a really bad spell so wasn’t expected to feature in the elite event leaving the race wide open. All race it was a real battle between a group of four before the form rider of the field Kevin Pauwels of Belgium (in white) overhauled Lars Van der Haar (Red white and blue) of the Netherlands, but he only rode away with half a lap to go. 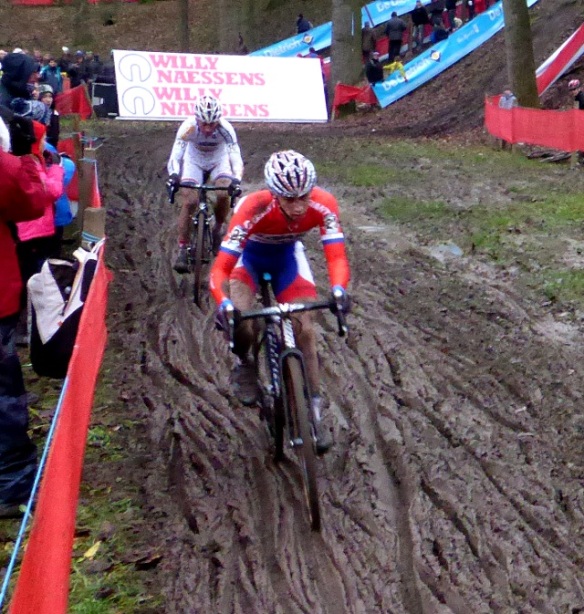 A cracking day out –great cycling, boisterous crowd and above all an amazing setting. Belgian cycle sport – it really is the gift that keeps on giving. Merry Christmas cycling fans, see you at an event next year?

*We attended the Namur Cyclocross as guests of the UCI, world cycle sport governing body.