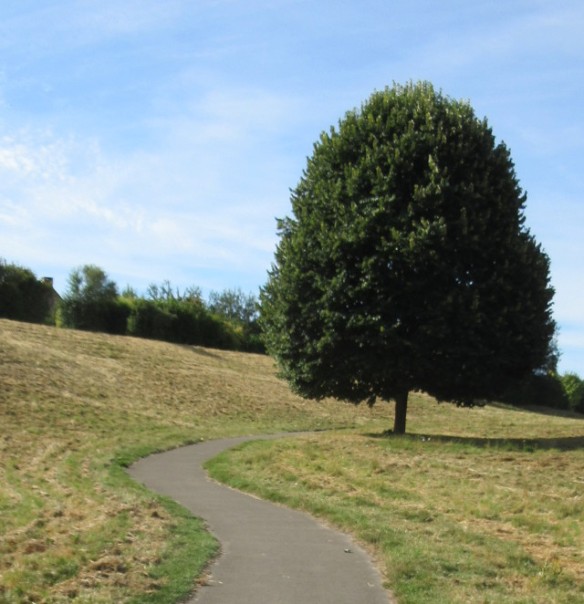 Is the cycling equivalent of the Buddhist philosophical conundrum “What is the sound of one hand clapping?”

This is the question I have been asking myself for a while, a mental discussion triggered by the relatively recent discovery that I had been visiting an internationally important cycle touring route almost every day for eight years without having a clue that it was there.

I am always fascinated by the discovery of a cycle route sign, whether it is a painted arrow on a post or a high-quality information board. 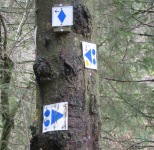 To me it is a promise, a signal that someone believes that this journey is worth sharing. Its is an invitation, one that I can tuck away in my mind and think, “yes, one day I will come back and ride that”. When it comes to routes where I live or where I am on holiday I very often do, I mean it would be rude not to when someone has gone to the trouble, wouldn’t it?

That’s even more so in the case of a long-distance route that might take multiple days or even weeks to complete. I’m quite unlikely to leap on a bike and start an expedition, but when I bump into a route sign or a map for a national or internally branded route I can have a little dream of distant destination and exotic discoveries.

What triggered stream of thought?

Well actually I can go back about 18 months, when I was riding with my local cycling club about 20 kilometres southwest of where I live in Belgium. As we rolled along I caught sight of an unusual road sign that I hadn’t seen before, in an area of small villages. Not quite the middle of nowhere, but a very unusual place to see a cycling sign to car sharing and the station, normally this would be an urban sign.

It was only when I was in the area a few weeks later that I noticed that the signs have a second element, a discrete yellow number 5 in a circle of stars. Now that caught my attention, because I instantly recognised the symbol for a Eurovelo route, the fantastic network of over 70,000 kilometres of cycle routes that cross Europe from end to end. Now it’s a bit embarrassing that I was surprised to see the EuroVelo sign, because the Eurovelo network is coordinated by the European Cyclists’ Federation, I had been effectively sitting next to the EuroVelo team in the office for 7 years but I didn’t actually know exactly where EuroVelo 5 passed through Belgium. 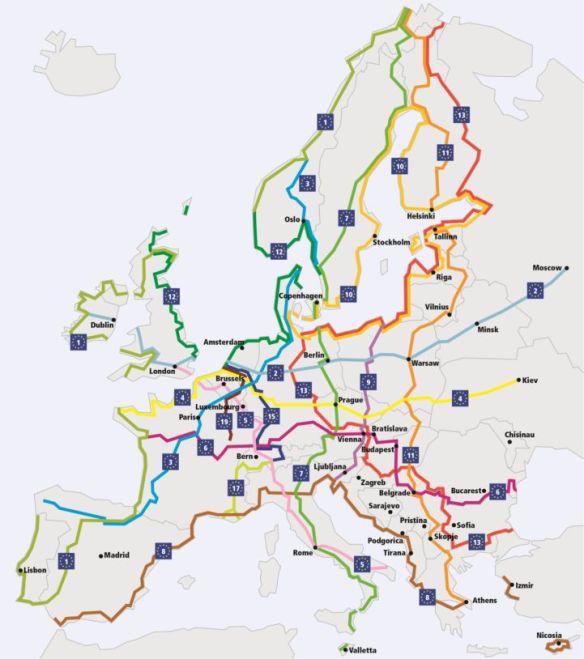 As an excuse I will claim that it is a very large map, and if I had to guess I would have assumed that the EuroVelo 5 probably ran to the west of where we live, perhaps using one of the canals, because I had never seen any other signs.

But now my interest was raised for exactly the reasons I described earlier. EuroVelo 5 is a route from London to the Mediterranean based on an historic pilgrims’ route to Rome and eventually to Jerusalem. From where we live it covers five more countries and ends up at Brindisi in the south of Italy. It is the route of “Crossing Europe on a bike called Reggie”, the first book by the cycle touring author Andy Sykes.

With that in mind I decided that I would treat myself a local ride with a bit of added inspiration, plus I was now curious where it actually went.

And that brings us full circle. How does the EuroVelo 5 route arrive at the signs I found? Well it just about wraps itself around where we live, including passing through Rixensart railway station, the station I go to every day travelling to or from Brussels. When I bike to Brussels I cross it. My profile photo on Facebook is the beautiful Genval Lake, one of the beauty spots of the route in Belgium. And I had no clue.

I could and should be even more embarrassed I guess, because I worked for ECF and I didn’t know that I was almost sitting on a Eurovelo route. In reality I just find it a frustrating waste of a brilliant resource. How can the authorities have this amazing and inspirational route on our doorsteps and not acknowledge that it even exists?

The signs south of where we live are in fact the first attempt by a Walloon province to catch up with EuroVelo 5. They appear over the border of our neighbouring province of Namur and they had used the installation of new local node point signs to mark out the Eurovelo route as well.

Unfortunately, our province of Brabant Wallon has put in a complete sign network for local nodes as well, but didn’t acknowledge EuroVelo 5 at all, even though the route has carefully been directed right past the tourism office in the provincial capital of Wavre. (One of the clever tricks of cycle route design to try and encourage the authorities to take it seriously!) 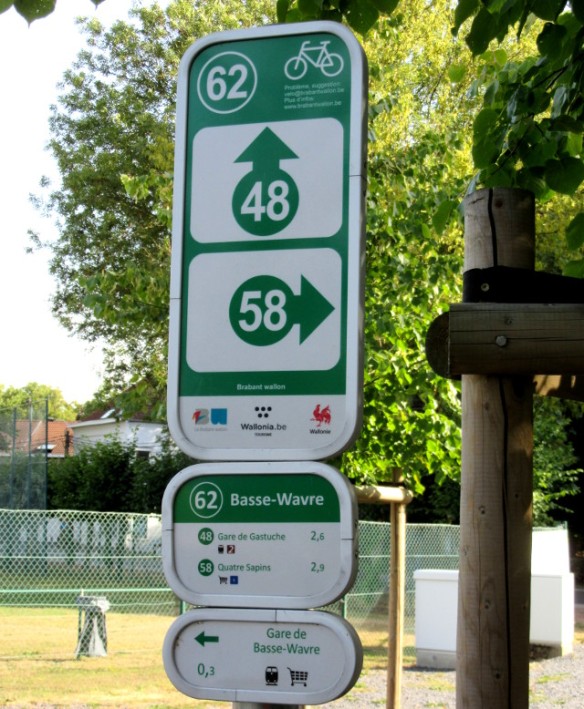 This is great shame, because the section in our province is a lovely ride, a little segment of peaceful and almost deserted Wallon countryside. Since I took these summer photos it has become a favourite, I am happy to nip out and ride it any time.

And now I know it is there I can look fondly at the cycle path as it exits the station, and on a wet and windy Belgian day I can imagine that it is inviting me to ride off to Italy one day. I just wish that the Province and the communes along our section had the inspiration to share it too.

2 thoughts on “What is the point of a cycle touring route if no one knows it is there?”