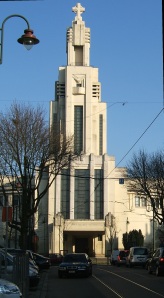 Just as spring transformed England last week it is amazing to come back  to Brussels after 3 weeks away and see what a bit of sunshine does to the grey old dame. It was funny talking to one of the ECF staff tonight – like me he is not Belgian but when we were discussing cycling experiences he said after two years he has forgotten what it is like to see things through fresh eyes.

I’m like a kid with a new toy and I’m trying to ride different roads every day. This morning I rode for about an hour, looking for the views that suddenly open.

This piece of brutalist 1930’s architecture appears unexpectedly on what could have been a simple roundabout, completely out of context with its surroundings but sun makes it light up and dominate its surroundings.

And at last some other cyclists – sweeping down to the grand Jubelparc.

And this evening we grab a quick beer at Flagey – coolest outdoor drinking in town. And recognising that cycling here is an activity for the young and active there are far more bikes around, and I love the culture of just sitting round the bikes with a beer when there are no seats left. 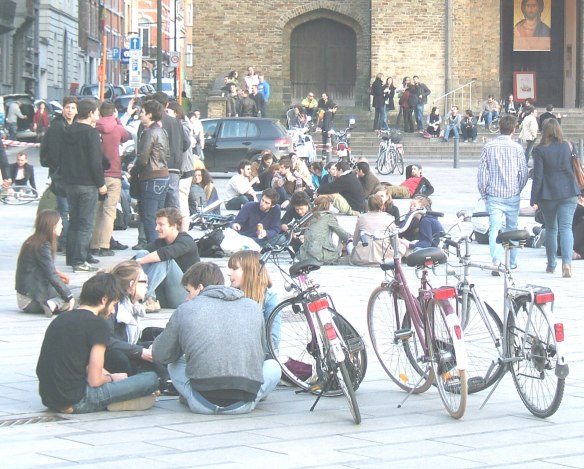 By bike for a beer at Flagey

There are lots of moans about cycling in Brussels – especially if you come from the Netherlands, or even Germany. But I really won’t complain. there is nowhere that cannot be transformed from the saddle.

But Brussels has two secrets that should make one of the best places in the world to ride.

The first is the most simple. This is a really, really, really bad place to be a driver. Congestion, no parking, confusing layouts, trams in the way. And the “give way to the right” rule which seems to work at some junctions and not others, and nobody really knows why, especially the 40% of ex-pats that live here. It has always be said that the safest drivers are the ones who have to think and observe. In Brussels driving is such an awful experience drivers have to concentrate all the time. This means they might do some stupid things to get through, but the cyclist seems to be noticed much more than I expect in the UK, and the drivers often wait because they seem to have no more idea than I do about who has the right of passage.

The simple sign that lets cyclists ride down almost all one way streets against the traffic. Why did we have to fight so hard in the UK for such a simple measure that gives the cyclist charge of the whole road network. In Brussels it is like a golden key that makes us the only people who can actually travel in a straight line. OK some of the streets are really narrow and bouncing your way down the cobbles towards oncoming vehicles takes a bit of nerve so it isn’t yet a solution for the fainthearted, but it should praised for the freedom it gives us.