Although it is much less well known than some of its more famous neighbours Venice and Verona I think Padua is a great place to ride a bike and should make a good stopping point for any passing cycle tourists or advocates interested in seeing a fully traffic calmed city in Italy. (Thinks out loud “Padua for my English readers or Padova out of respect for its proper name? No idea – use a bit of both.”)

Last week in Verona I was lucky enough to be guided and helped by the cycle tours organised by local volunteers but here in Padua the local FIAB volunteers were flat out proving cycling fun for children visiting the Padova Expobici cycling show so I was a bit more on my own.

However they did provide the equipment, a mountain bike that was a reasonable steed for the cobbled streets throughout the city centre. Unfortunately when I first collected it from the hotel baggage room it had a flat which did lead to one of the most entertaining misunderstandings of my ventures into Italian.

My hosts asked me to bring the bike to the children’s try out area at the show where the volunteers had said they would stick in a new tube. So of course along I pop pushing the bike and wander up to the desk. Unfortunately the chap on the desk was the one person not in the know and he was convinced I was a 50 year old juvenile who wanted to play on the kids track! I was sent off to play with the big kids despite all my attempted explanations.  It was all resolved with considerable amusement a bit later by the rest of FIAB Padova. 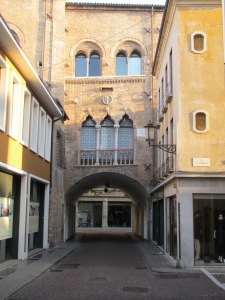 Anyway back to my trips into the city.

The photos here come from two excursions into the town which I fitted around my work at the Expobici. On Saturday morning when the flat tyre was discovered I walked the city which led to my early discovery of the great contrast with Verona that I blogged about last week.

I keep mentioning in my posts how much  I like mornings, there is something quite different about a city waking up, especially when the dominant noise is the rattling of bicycles and the shouts of the market traders , not to mention the fact that you can actually smell pastries and coffee everywhere.

On Saturday evening I also had a ride into town but unfortunately no time for photos as I was off to dinner with my hosts. This gave me a ride through the city from north to south and a great chance to zig zag around the narrow alleys and short cuts. However I was stopped in my tracks when I emerged into Piazza Prato della Valle. It is the most enormous open square that I have ever seen in a city of this size. I was immediately reminded of Plaza de Espana in Seville but this seemed even bigger.

This gave me the itinerary for my Sunday morning ride because I really wanted to see the Piazza in daylight, even if the morning was a bit gloomy. But this time because I had a bike I was able to take a slightly longer route and I decided to circle around the branch of a river which serves as a historic moat around the inner city. Riding along waterways you often see bits of architecture and heritage that survive from different eras and the water itself can be great. Turned out that Padova was no exception, the western branch of the river took me along quiet streets with some gorgeous old bridges, buildings and perspectives on the city. 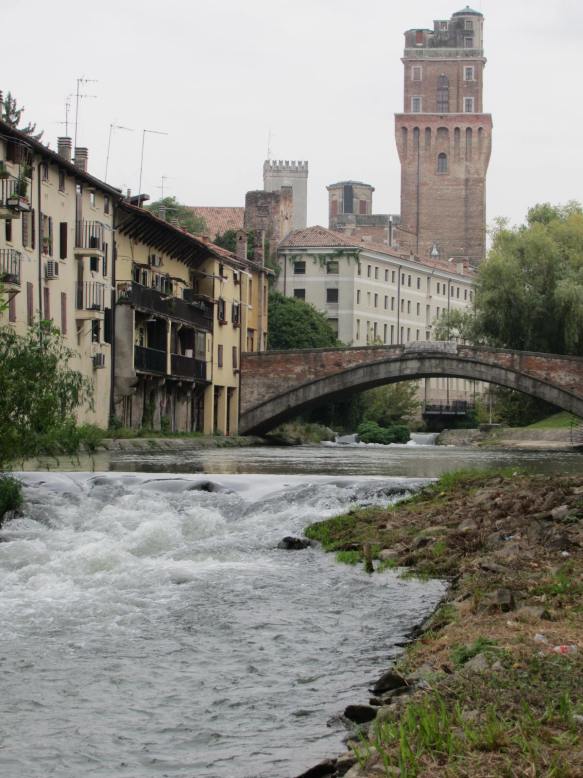 With time running out I swung back towards the centre of the city along the ample cycle lanes and came to Piazza Prato della Valle again. The translation is “Meadow of the Valley” so I can only imagine that at one time this was a vast open space leading to the river. Today it is a formal square with a ring of water features, statutes and seats in the middle and a vast open expanse of walking and cycling space. At one end Abbazia di Santa Giustina is a huge church and abbey but even it seems lost in the corner of the open space.

The cyclists mooching through the square just showed the scale, they looked tiny and even a club group of 20 road riders turned out in immaculately matching club colours could not make it look busy.

A check on Wikipedia after returning tells me this is indeed the largest square in Italy, some claim when you consider something like St Peter’s in Rome.

Great place to ride a bike. And on a human level some final thoughts. When Venice was a city state Padua was its university town, a tradition it keeps up today. So the first thing I noticed about the cyclists and pedestrians was the large numbers of young people, something cycling shares with other great university centres, surely something we must keep building on throughout the world.

And also in keeping with the great cycling centres of Amsterdam and Copenhagen I am sure that a significant majority of the cyclists I saw were women. 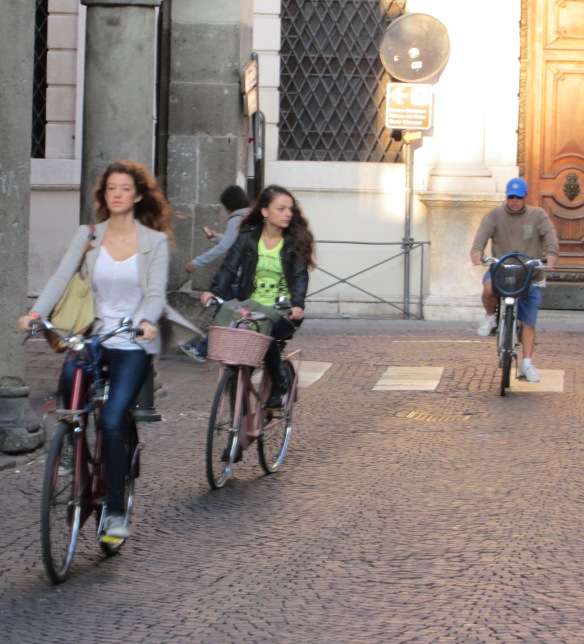 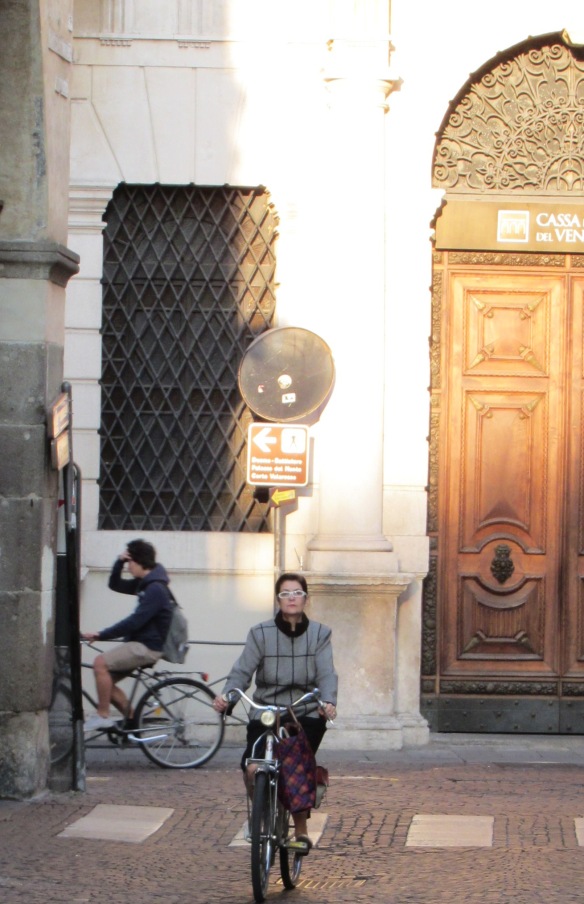 you are on the right path, Padua cycling culture must be a great example because it is young, female and wearing ordinary clothes.. The Cycle Chic movement writ large, excellent.

Now if only the cycling shows could understand that ….. But that is another story.