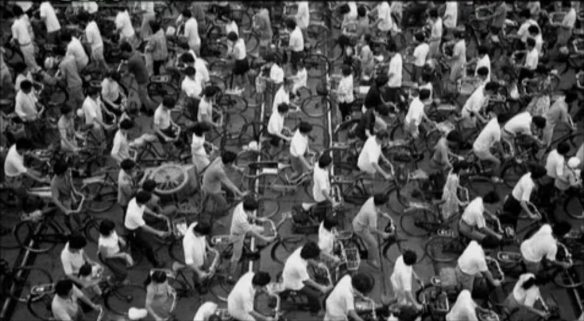 This post originates from one of those unexplainable coincidences that life throws up. And once they have occurred I know I just have to talk about it.

I was thinking about a “bucket list” post for New Year, reflecting the many cycling experiences I would like to have or to share. I know it has been done many times, but it is a great concept.

On my “done it” list was one item that I feel is probably now impossible to replicate and I was going to challenge readers to suggest an alternative. In 1985 I had the privilege of hiring an upright black bike and riding the streets of Peking with my father. (Now more correctly called Beijing of course).

The only way I can capture the feeling today is to imagine a flock of black birds. The flock wheels and turns, seemingly at random, but somehow the birds do not collide and as a collective the flock becomes a thing of beauty. We two clumsy westerners were almost certainly a break in the harmony, but it didn’t stop it being a magical experience.

I have cycled the rush hours in Amsterdam and Copenhagen but it doesn’t feel the same even today. Maybe it was the touch of the exotic, the scale of the streets, huge highways full of bikes, or perhaps that there were so few cars in 1985 Beijing that the cyclists felt like kings. We certainly weren’t pinned to the side of the road in token lanes, we were the traffic.

I had gathered these few thoughts together in my head as part of this possible “bucket list” post when out of the blue Patrick Keating from Velocapital Partners circulated a report on cycling traffic in China, together with a link to this lovely film from China Central Television English Language service. It is 25 minutes long, so take a glass of something or more appropriately a cup of tea and enjoy the film and photography.

Of course much of that cycle traffic has gone now and the rush for cars has driven cyclists off those boulevards in Beijing. Even in 1985 we found the centre of Shanghai to be so congested it was almost gridlocked by buses and taxis and by all accounts the transition in Beijing was rapid. Sadly I haven’t been back since 1985 but I doubt any experience can replace that day. However the film was a great reminder.

By the way Julian – riding your Flying Pigeon in Brussels doesn’t even get close. Sorry mate.