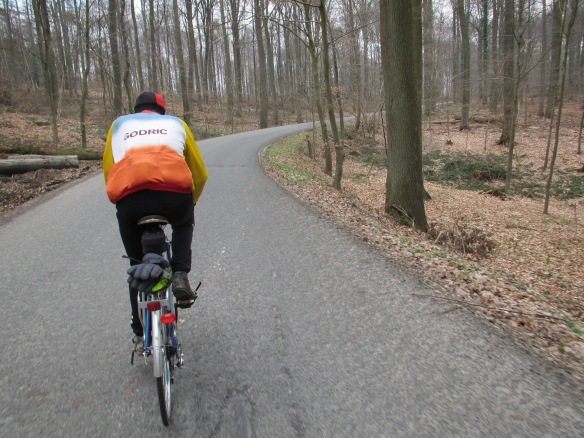 One can have too much of a good thing so I’ll stop banging on about the Tour of Flanders after today. I promise to post something about daily cycling and the “30 rides in April” Challenge at the end of the week, but be warned that I am hoping to go for a complete fix of race watching in the next few weeks with visits to Paris Roubaix, Fleche Wallonne and Liege-Bastogne-Liege.

What I am really looking forward to alongside the race experiences is an excuse to cycle in parts of Belgium and northern France a bit further than I can reach on day rides from Lasne and perhaps a bit off normal tourist routes.

Actually I have to confess that I don’t know what a normal tourist route is in Belgium. Ever since I got here I have felt horribly unprepared to become a Belgian resident because I knew so little about the country. I know I am not alone because so many people I have spoken to had experienced holidays or business trips to the more celebrated European countries or tourism areas such as France, Spain and Italy or they have visited popular capital cities such as Amsterdam and Copenhagen. Those that have been to Belgium mostly visited Brussels or Bruges in search of beer or a statue of a peeing boy and experience almost nothing outside the cities.

As cyclists we experience countries in a different and more intimate way than other visitors. This may be seeing cities above the dark tunnels of metros and free from the congestion of surface transport or seeking out the most rural routes and tiny villages away from the hot spots. Wherever I have lived I even find myself driving non-cycling visitors round the routes I have cycled because I feel I can explain them better and I know where I have stopped, looked and felt the terrain.

So I feel embarrassed that I knew nothing of what Belgium had to offer the visitor or the touring cyclist just a few months ago and my learning curve is enormously steep. Cycling really helps however and this weekend was typical of that sensation. The only images I had of riding in Belgium before I moved here came from those classic races on television but I could not put them in to context without riding the area a bit and tasting the countryside. I know my local area better now but I should know more.

The area where the Tour of Flanders finishes is known as “The Flemish Ardennes”, presumably because it is the lumpy bit of Flanders which is generally the flatter part of Belgium. I am sure the naming has nothing to do with the first rule of Belgian politics which is “if they have we one, we want one” in the battles between the Dutch and French speaking communities. So if the higher hills of Wallonia get more widely recognised as the Ardennes then the Flemish need to steal a bit of the branding too? Of course not, cynical me. 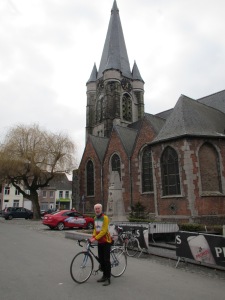 However it was a really nice place to ride a bike. We started our ride from the neat market town of Frasnes, just over the border in French speaking Wallonia and set off north to ride across a range of hills to Ronse, one of the towns on the Ronde route. Then we had been pre-warned that we would have a hard climb out of Ronse to get up to the route of De Ronde.

The most important thing to say was that the countryside was absolutely deserted. It may have been Easter Sunday, freezing cold and the cycling was on but I can rarely remember a ride with so little traffic. It was absolutely great to drift through small hamlets and farmsteads feeling we were the only people around. And once we started climbing up through the small forests the world was silent except for the gusty breeze in the trees.

Even when we dropped into Ronse it was hard to imagine that this was a town about to experience one of the world’s major sporting events this weekend, the town was like a ghost town. It would have been hard to improve on those first 12 km but actually we did.

First we had to find our way out of town without getting blocked by the race. Vincent had plotted me a route that bisected the various loops of the race perfectly. It was also great to see that the route was part of a permanent Ronde Van Vlaanderen route, obviously a tribute to the race.

Firstly a chance to channel your inner Cancellara by climbing the Kappellestraat out of town, up a steep climb through the houses and out onto a high wooded ridge where we wound our way through some beautiful houses and gardens overlooking the town. Steep though, as you can probably see from Geoff’s grimace!

At the top we were able to cross the course of the race and then set off into a network of narrow lanes. My confidence was boosted by a sign that said this was the Eddie Merckx cycle route but other than that it seemed to be another deserted road.

Just a kilometre down the road we reached a crossroads which produced further surprise because Vincent’s recommended route took us down a dirt track which wound past a farm and then up a draggy climb. It all seemed as if we might be going down a completely wrong direction but the views from the top were great. 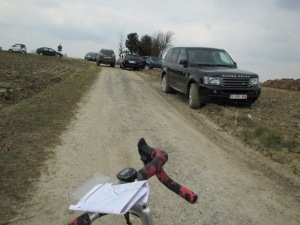 After that we switched around what seemed to be a few cars parked in country lanes and suddenly emerged at the top of the Paterberg.

If I combine the routes we rode with the all the possibilities shown by the route of the race it is pretty clear that this will be a superb place to ride a bike for the occasional touring ride and cycle tour too. Strongly recommended by our guide Vincent was the Route do Collines which looks as if it will be a fantastic ride.

I quite fancy the idea of the some of the sportives that criss-cross the area too. Ultimately I really hope one day I might be fit enough again to take on the Tour of Flanders Sportive itself but that is a whole different story.

Cycle touring in Belgium – clearly one of Europe’s undiscovered secrets.

2 thoughts on “Cycle touring in the Flemish Ardennes, home of the Tour of Flanders”