A small favour prompted me to revisit this classic Monty Python sketch.

I usually enjoy playing at Bicycle Repair Man, the opportunity to give someone back their cycling through a small tweak or adjustment or fitting a spare that I just happen to have in the shed. Last week it was a tweak to brakes and gears and my colleague was off.

However while I am happily tweaking other people’s bikes I am deeply in need of a bit of BRM magic myself. How would our hero have coped with the complexity and diversity of modern bikes? I have spent absolutely hours going nowhere in the last few weeks on just one bike while it holds up painful decisions on other machines.

The main problem is my clunker, the work bike that I actually do most of my miles on. It is a carefully crafted beast because it combines lots of thrown together parts that create a bike that looks really ugly but actually has exactly what I need. With a good layer of dirt and grease on top it is the machine nobody wants to steal, although I do get looks on the train that are almost as dirty as the bike. But it can do almost anything from the daily commute to low level mountain biking in all weathers.

Each incarnation has had a rigid MTB frame (currently a Giant Granite) and fat sturdy puncture-proof tyres from Schwalbe (Marathon Plus) which I ride until something falls apart. The main investment is the rear wheel where I use good quality, otherwise everything else is where I do my experiments, bodging together all sorts of combinations. I have learnt so much passing these bits from frame to frame over the years I reckon I can make most things work.

However this winter played hell with the machinery and in the last few weeks everything decided to pack up at once. The chain and sprockets finally got to the point where I was selecting about 3 gears from 24 and the bottom bracket was making ominous noises.

I spent hours in the shed trying to combine every set of chainrings and cranks I had into something that would work but there’s not a lot of point when the teeth barely exist.

Got that sorted eventually (spent money – hate that) but a week later the bottom bracket just seized with some suitably horrible crunching, fortunately just a short distance from home. I was about to start replacing that when I noticed a crack in the frame, so it has finally bit the dust, not bad for a machine of unknown history found abandoned in a Reading park several years ago. 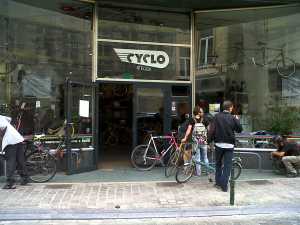 Off to Cyclo, the well thought of bike recycler in Brussels that takes all the old bikes off the street and operates a social enterprise and community workshop in search of a frame.

What a treasure trove, buzzing with customers and atmosphere. Hundreds of bikes of all styles and vintages waiting to for buyers, most €100-€200. I would love to have had a few hours in there, I am sure there were some classics waiting to emerge.

However it was a practical visit and I was treated to a trip down the basement where the recently arrived and unused bikes were stashed. It was actually pretty easy, within minutes we had found a scratched and battered MTB frame with a bottom bracket and headset that looked just the job.

Back to the office on the metro and then I entertained the office when I set off for the station with my burden.

Nothing unusual about that in my mind, they obviously haven’t met enough bike bodgers here. Next stage of the chaos then ensued because SNCB had managed to cancel one train and tried to force two trainloads of passengers onto one half sized train. The bloke with two dirty bikes got lots of cautious looks from anyone wearing pale summer clothes although there was general good humour about my antics, climbing in and out at every stop with both machines to let people on and off.

But no matter how painful the process had been so far I now needed the satisfaction of getting the project moving properly to put the wasted hours behind me. So off to the shed.

I was actually making reasonable progress until I got to my final job of the night. Putting the wheels into the frame to set up the brakes..

I then stood back in amazement. I was going mad. The wheels had shrunk. Nothing would line up.

And slowly it dawned on me that the frame may have looked in every aspect like an MTB, but it was actually a typical continental trekking-bike set up, 700C touring wheels in a MTB set-up.

Arrggghhh – fallen into the incompatibility trap. And in this case one with a special Belgian twist. A check on the internet showed that indeed the Diamond Galaxy is a Belgian made trekker, not an MTB.

I spent last night and all my bike ride to work this morning stewing, cogitating and creating. Don’t have a plan yet – I need a sprinkle of some BRM magic.

Three types of brake possible but maybe not a full set of each, loads of wheels with umpteen gears, few of which are compatible with each other or maybe I can use it as the tourer for which it was designed and I’ll start again on a new work bike.

There is the common sense “take it back and try again” option, but that breaks just too many rules.

Thank goodness it doesn’t involve my other current maintenance hates – mainly hydraulic disk brakes. If you really want to annoy me just now put a post in a forum describing in detail a simple process that requires me to buy a kit, read about, understand and buy loads of different incompatible oils and widgets for two separate bikes and then enjoy fiddling with it for hours. Oh really? Please – wires and levers of single design – please!

Bicycle Repair Man you had it easy when bikes were black and the only thing involving pressures was a quick squeeze on the tyres. But you are still our hero and I’ll be reminded of you the next time I can tweak something that puts someone back on the road.