On Thursday I went to Copenhagen for a brief visit, whizzing in one night and then leaving just a day later. Back to back meetings, but even from this brief visit I was inescapably drawn onto the streets to get my fix of Copenhagen cycling. Let’s face it, I am a cycling geek. Who else would get up an hour earlier than needed so they can just go out into the dark and stand by the cycle lanes? My wife occasionally thinks I may be a bit creepy, standing by the road just sort of stalking the cyclists with my little camera. But I am sure the Danes are probably used to it, especially in Copenhagen.

Amazingly since starting this blog this is my first visit to one of cycling’s great capitals and one of my favourite cities. I certainly don’t need to go there to support cycling or the cyclists’ movement, like many other visitors I go to learn and be inspired. In 2010 it was the host for one of the best Velo-city conferences when I had the enormous pleasure to be there with over a thousand delegates and then stayed on a for few days with my son to do some chilling and cycling. The instant I mentioned I was going to Copenhagen this week his immediate reaction was “I’m jealous” which pretty well sums up how we feel about the place. If HG Wells was truly uplifted by every cyclist he saw then Copenhagen would be like his wonder-drug.

It also seems a little low key for me to be blogging about Copenhagen when it is the home and inspiration for one of the most followed and influential cycling blogs Copenhagenize. Mikael Colville-Andersen is undoubtedly one of the sector’s most successful communicators and has done a great job with his evangelical work to take the success of cycling in Copenhagen to the rest of the world.

But here are a couple of thoughts that I have felt on previous visits to Copenhagen and which hammered themselves into my mind once again as I observed the amazing flows.

The first thing about Copenhagen cycling is the volume. Of Europe’s major cities its only competitor is Amsterdam where a similar 30% plus of daily trips are made by bike. But in Copenhagen it seems to me that the cycling traffic seems more concentrated leading to huge numbers being recorded on the roadside cycle counters. I was out at 7am and already several hundred had made their way along Hans Christian Andersen Boulevard. Then as I wandered the area around the City Hall and Tivoli Gardens and watched for nearly an hour the numbers just grew, hoards of Vikings looming out of the dark with their ubiquitous flashing white front lights. By 8am congestion is building up around the main junctions with cyclists tens deep waiting to move on. And this is cold, gloomy mid-winter. 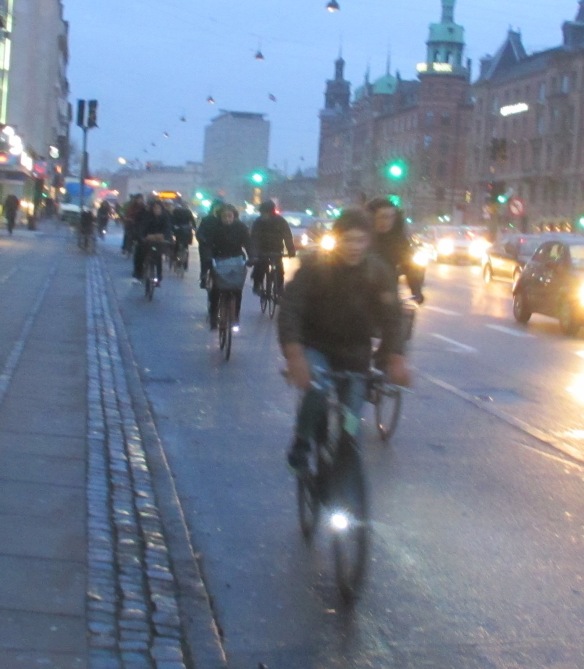 The second thing I always see in Copenhagen is the speed of the cyclists, whether I am riding, walking or watching. To a Brit brought on almost cycle free streets the first terrifying experience you get on every trip to Copenhagen is the moment you absentmindedly wander onto or across a cycle lane and a Dane comes zooming out of nowhere tingling their bell at your stupidity.

But then I just stand and watch, realising that these people dressed in ordinary day clothes on sensible utility bikes are absolutely flying. A colleague told me he averages 20km per hour to work for every day despite numerous traffic light stops. He doesn’t regard himself as at all unusual and he certainly doesn’t require special clothes or a fancy bike. Even the macho male/sensible female split doesn’t apply here, the women seemingly ride just as far and fast and if my experience is anything to go by they are just as grumpy about idiot tourists in the cycle lane as the blokes.

They have even implemented a traffic management system in Copenhagen called the Green Wave which allow the 35,000 commuters on the Nørrebrogade to cruise through synchronised green traffic lights at exactly 19.3km per hour. How cool is that. But I bet anywhere else that would be less than 15kmph. But away from the green wave the frequent traffic lights mean that the cyclists look like they are hunting in packs as they jump between the lights in swarms. 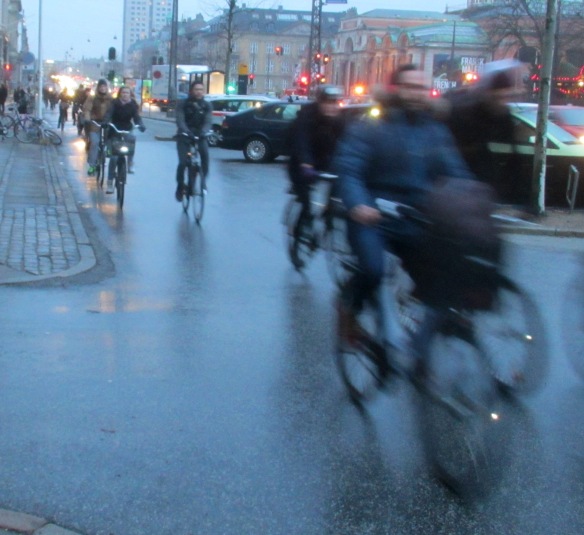 I am sometimes asked about the difference between the Danes and the Dutch. There are many things one could say, but if I want a short answer I say “about 30 degrees”

Danish or Dutch? You work it out

Why 30 degrees? Because I reckon Dutch cycling style can be summed up by a gentle lean back in the saddle into a relaxed position about ten degrees from vertical, suitable for chatting, texting, eating, smoking or just about anything else, the bicycle itself is forgotten. That’s why they are sometimes called “wheeled pedestrians”.

Not the Danes. Danish cyclists lean forward, earnestly pumping the pedals, pulling the handlebars and zooming to the next junction. Maybe 20 degrees tilt forward, but rarely backwards. Look at this wave pulling from the traffic lights. One second they are resting and chatting then the young women are up out of their saddles heaving away like a pro peloton in case they get swamped from behind.

Given their intolerance of bad cycling as well it seems that they behave …… just like car drivers! They even have their own version of trucks in the cycle lanes, the cargo bikes, just to complete the analogy. If we look to the future this could be it, bicycles as proper, full on traffic with speeding, congestion and road rage. Perhaps we should be careful what we wish for. I hope not, and even the Danes acknowledge that some of this behaviour is due to congestion and it is time to increase capacity on the bigger routes in the near future, their super-highway network.

I could blame their speed for the fact that this blog post also suffers from the curse of the camera. My camera is great for stuffing in my pocket and travelling but sadly it is useless in half light, especially with motion. So given streets full of flying Danes the poor thing struggled terribly during my pre-breakfast wandering. So my apologies for the blurry crowd effects this week!

4 thoughts on “I do not despair re-visits Copenhagen. Where cycling has become traffic.”