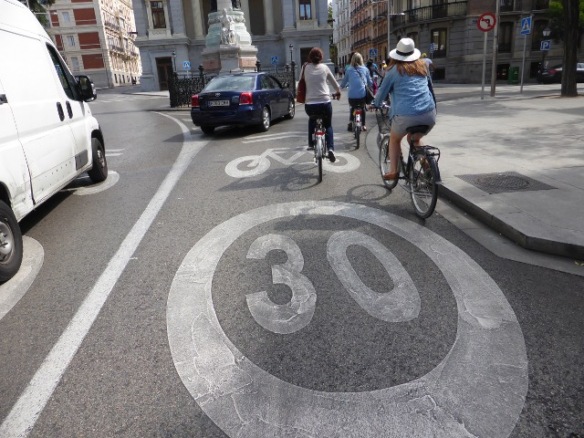 My experience of Madrid cycling was one of complete contrasts.

If I just spent my time in the trendy inner city districts I would have concluded that this was a cycle friendly city and the city’s hipsters were acting as the visible forerunners of a cycling movement, just as they are doing in so many fashionable cities across the world. 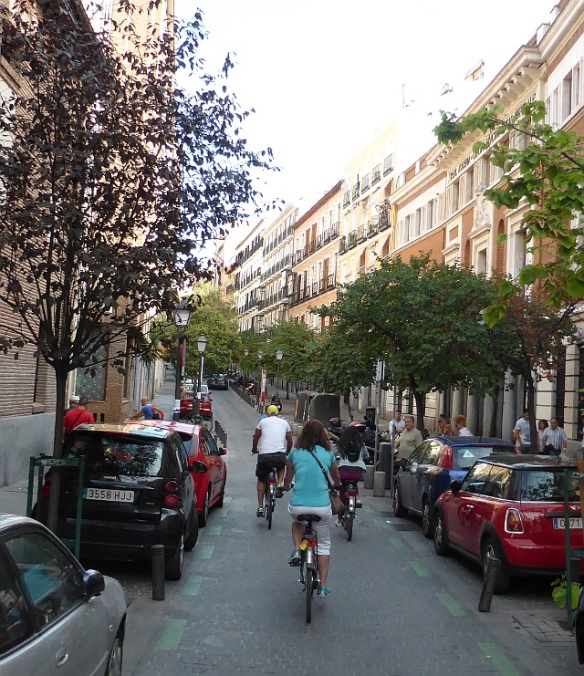 However as soon as I was exposed to the wider road network through and around the city I discovered the highly challenging conditions that any normal daily cyclist would face to get around. And that looks like the challenge – how is Madrid going to become a city for those without the confidence to mix with the difficult traffic?

In cycling terms I was rather spoilt by our opening day in Madrid. Using the “I do not despair” test of how long it takes me to see someone cycling I was just delighted to discover that our hotel near the Tribunal Metro station was on the edge of the Malasana barrio, a network of narrow, tree lined one way streets which were being used by cyclists on their own bikes and the BiciMad bike share system. It was narrow and difficult for cars so the speeds were low and apparently safe. 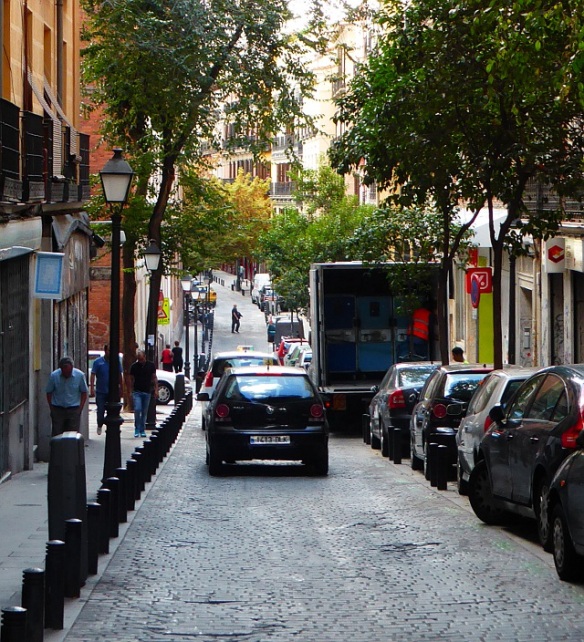 This is doubly exciting because BiciMad is one of the first attempts at a large scale e-bike sharing system so I had been hoping to see how it was going. Like other bike share schemes it was attracting people in day clothes and women which was very encouraging. 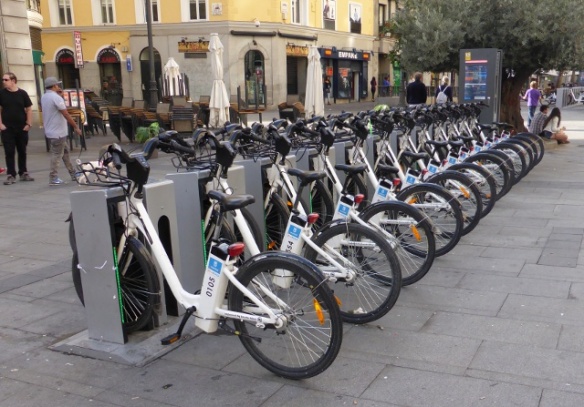 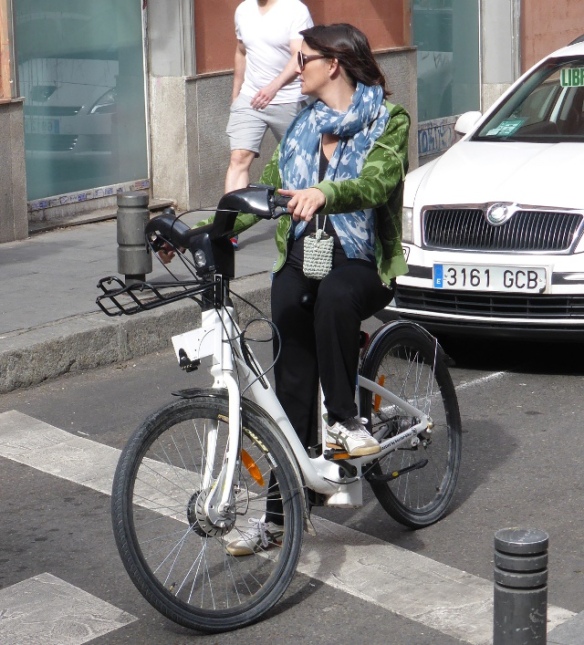 As afternoon moved to evening we had discovered Plaza de San Ildefonso which not only had its own BiciMad station but also was the home for the Bicicleta café, a cycling themed café filled with rather cool types and of course one of those bike gear shops that stocks just the right gear for one’s fixie. 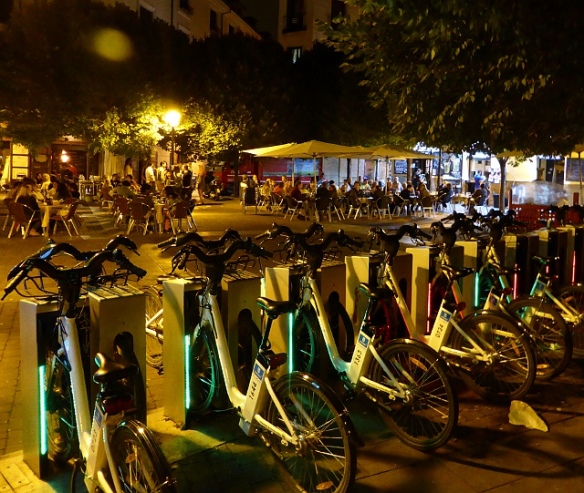 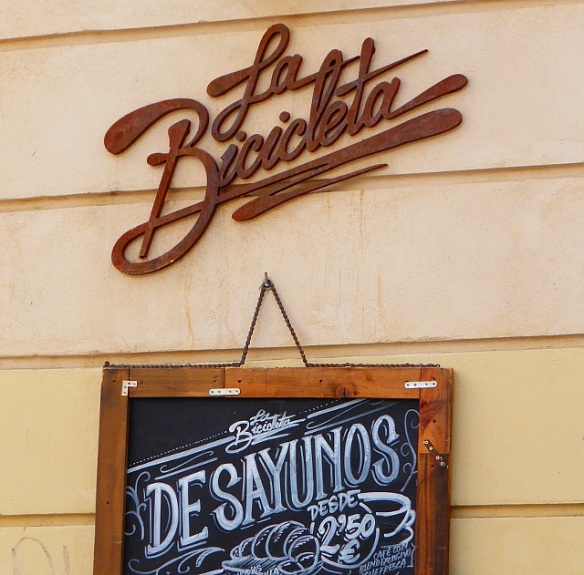 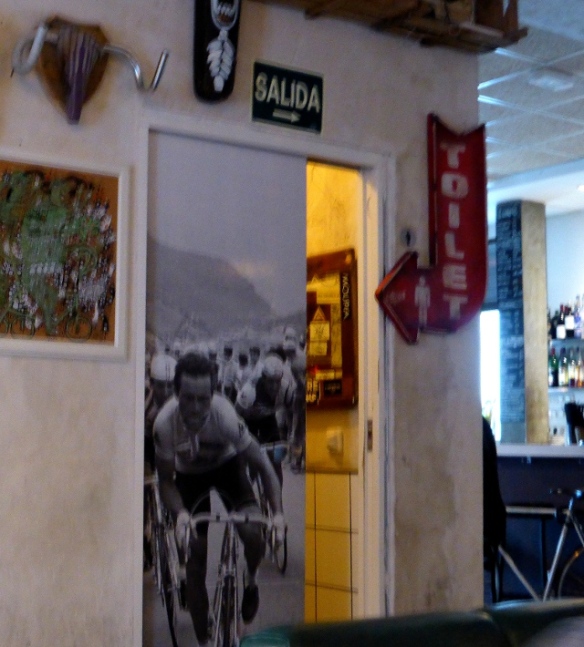 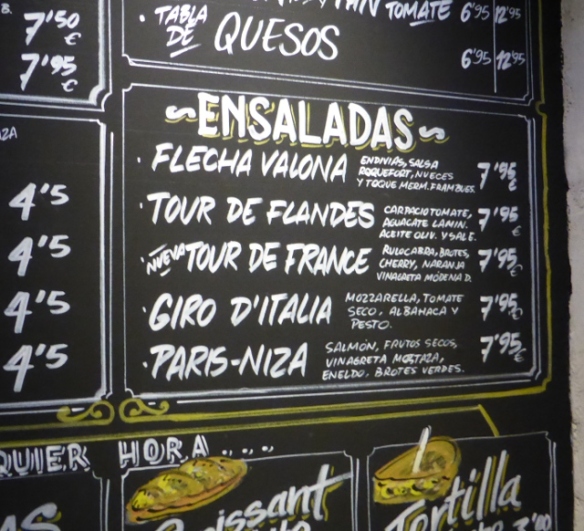 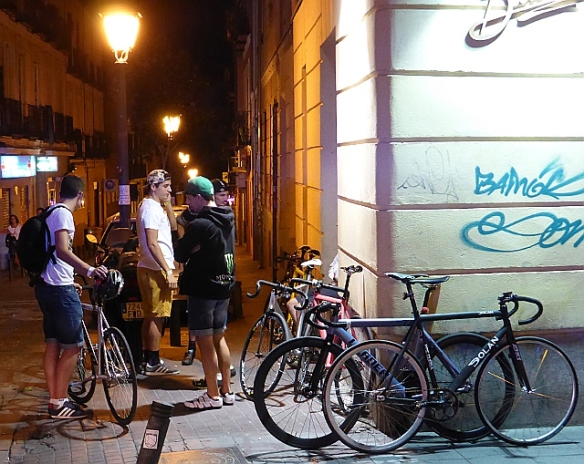 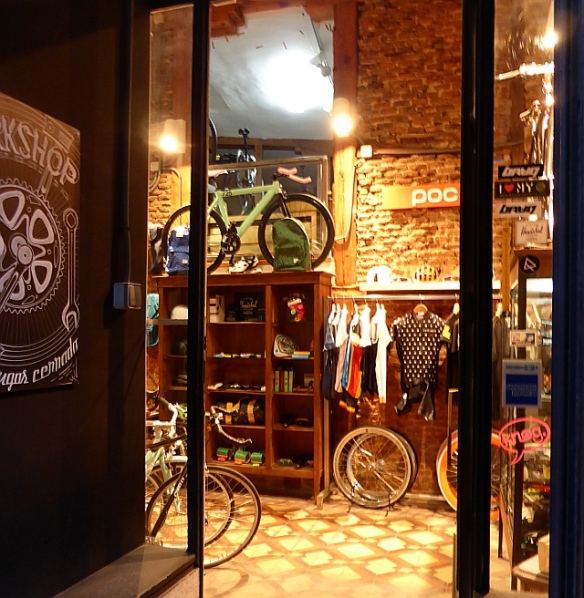 Actually the whole area seemed to have adopted a bike motif, other cafés had bike murals and all along the Fuencarral, one of Madrid’s main shopping streets the trendy shops were using bikes as window displays. 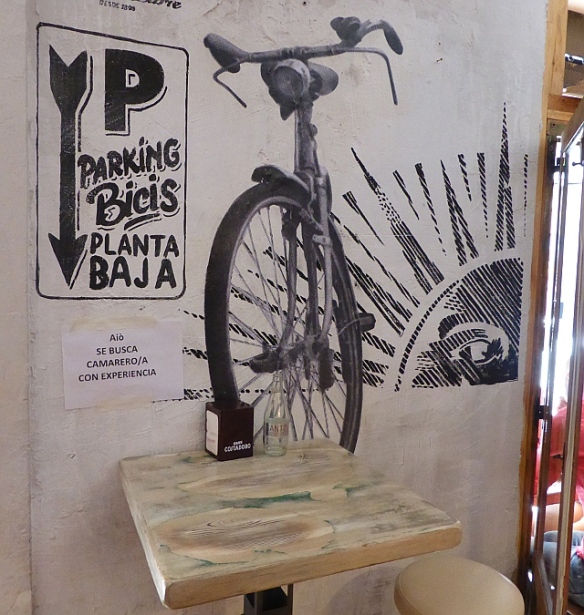 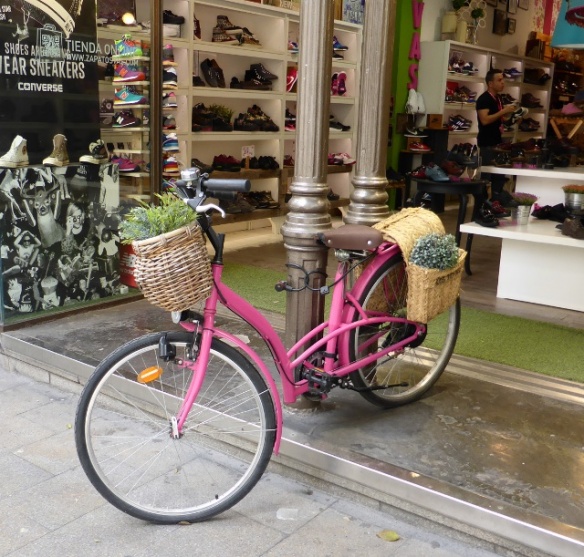 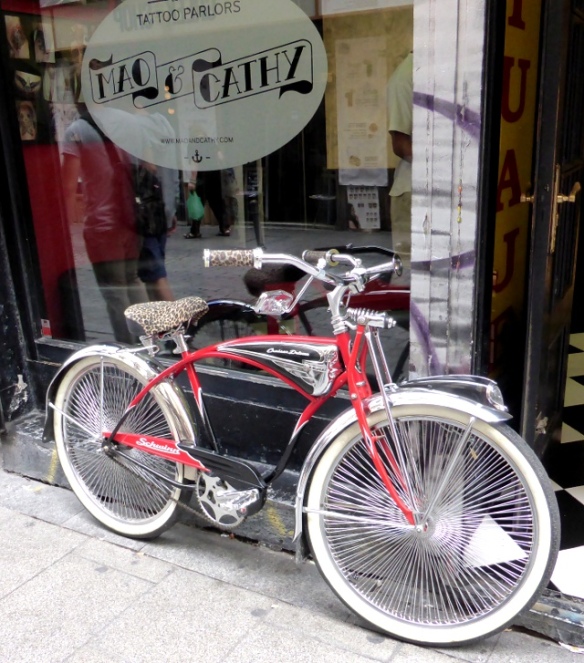 On following days this perception of inner city Madrid as the sort of city environment where walking is already important and cycling could flourish was reinforced by discovering further mazes of streets in the more popular tourist areas surrounding the Royal Palace, the Plaza Mayor, Puerta del Sol and Plaza Santa Ana. 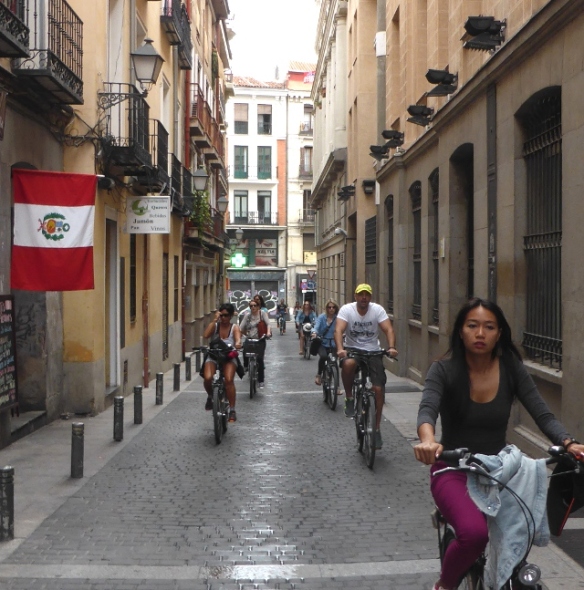 On the Sunday of my trip I went on a commercial bike tour organised by www.Trixi.com which used many of these streets for a really nice ride. On that ride I also discovered that many of the streets were 30kmph and some of them were actually marked up as cycling priority streets, although what that actually meant to motorists was far from clear. 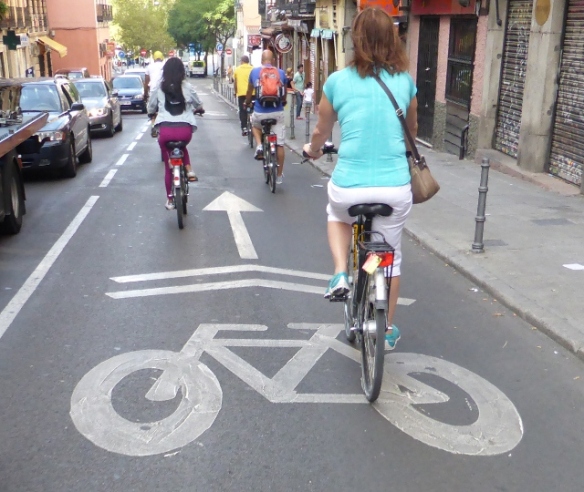 It is pretty clear that this is a policy priority for the city council because this week they also announced that they are going to impose some further very strong restrictions on car entry into the city with only residents cars and cars with pre-booked places in specific car parks being allowed into the residential and shopping areas of the city centre. That isn’t a car free city centre as we know it elsewhere but it is a significant move.

Despite all those positive you can sense I cannot give Madrid an overwhelming endorsement as a cycling city. Once I had found the city’s big car streets, the ring road and the huge roundabouts that surround the inner city it became very clear that despite all the opportunities for cycling in the city centre the access to the city is very challenging and not for the faint-hearted. 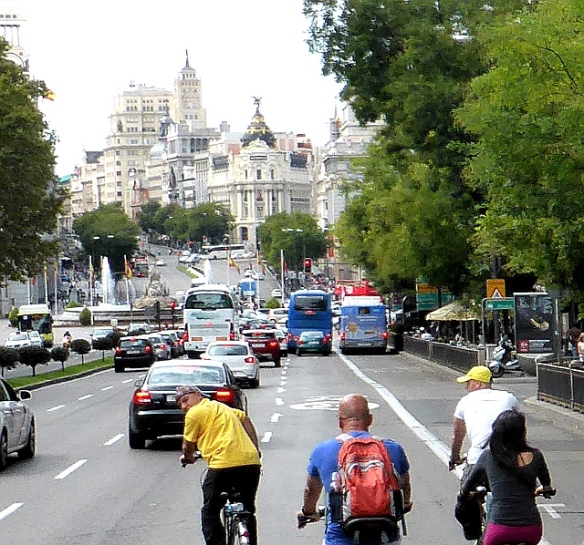 The city has apparently made an effort, on our Sunday bike ride we were guided to some bike lanes on the main roads. But amazingly bikes are not allowed in the bus lanes, so the buses take the inside lane, then there is a shared lane which lets cars in at 30kmph but apparently bikes have preference. 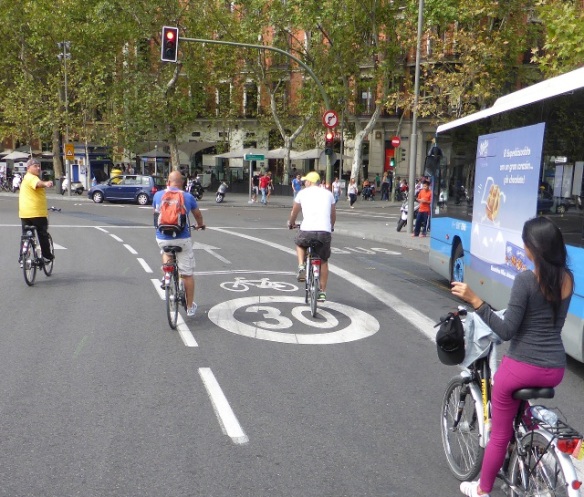 I have to say even on a quiet Sunday this was not a particularly welcoming place to be at all, even though were in a large group. Bold cycle commuters will cope with it when this is busy with daily traffic but there is no way this can be considered welcoming or inclusive infrastructure. We were taken to what is apparently the city’s only segregated bike lane but to get to and from it was not exactly straightforward as it came off a huge roundabout.

Crossing the streets wasn’t much better, it appeared to me that a big street like Grand Via could only be crossed by cyclists at the pedestrian crossings and there is no provision for cyclists at all.

Outside the big ring road round the city centre we came across more nice cycling areas like Park Retiro, the major park near the Prado Museum. It was bustling with cyclists taking exercise who were looping around the park’s roads. But they seemed just as captive as the cyclists in the inner city, trapped by the lack of connections to the suburbs. 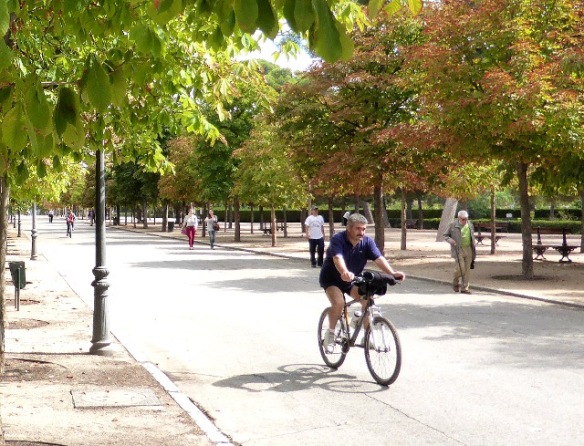 What I concluded was yet again I had found another of Europe’s low level cycling cities that has enormous potential for growth. And it will get some growth. As cycling campaigners we should be quite excited if the largest city in Spain could grow to 5% mode share, because that will be a big step. But having seen it I think it could be just like Brussels, somewhere else that needs a cycling revolution too but is completely constrained because it has provided almost nothing for less confident cyclists to move between the islands of attractive riding. That is just so frustrating but unfortunately it seems to be symptomatic of urban cycling in Spain which is currently stuck at some of the lowest levels in Europe.

I really enjoyed my Sunday tour round Madrid and the cycling scene in the inner city. If there was some genuine “joined up thinking” in Madrid there could be some real “joined up cycling” here.

2 thoughts on “Cycling in Madrid – great potential but major frustrations”