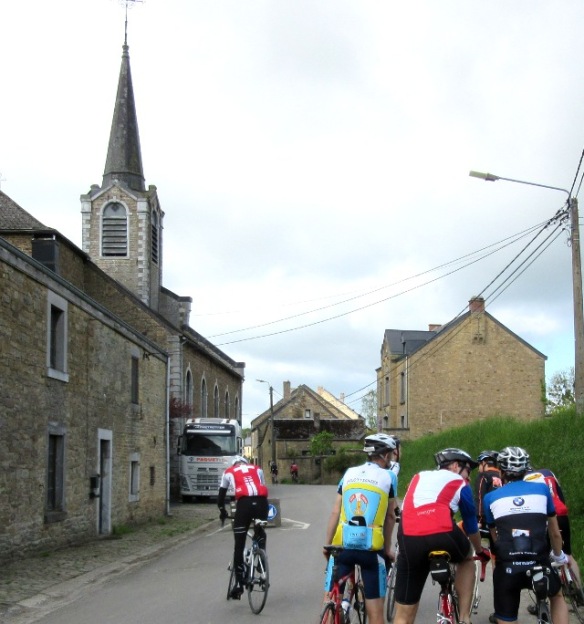 Last Saturday’s ride was the latest in a casual series where a few of us that work in transport cycling and also enjoy some sporty touring get together for a thrash round the Belgian countryside.

This time was a bit more than a group touring day, we had entered one of the classic rides that are dotted through the year and attract a big following, several thousand per ride. The Tour de Namur is one of a couple in Wallonia, known for its continuous hard climbing up, down and around the valley of the Meuse and into the lower foothills of the Ardennes.

Our so called “medium” ride was 130km and in that distance it packs in nearly 1800 metres of climbing. These are not the cobbled bergs of Flanders, they are mostly smooth tarmac but they make up for that by being much longer and quite a bit higher.

But the hills are far from the story of the day, at least as far as describing the area is concerned. This was a lovely spring day in beautiful rolling countryside. I have been here before, to watch the Fleche Wallonne classic race a couple of years ago and earlier this year for a similar mountain biking route. But neither of them saw the countryside looking as great as this.

The villages and fields were in bloom and there was a fresh green feel to the hedgerows. 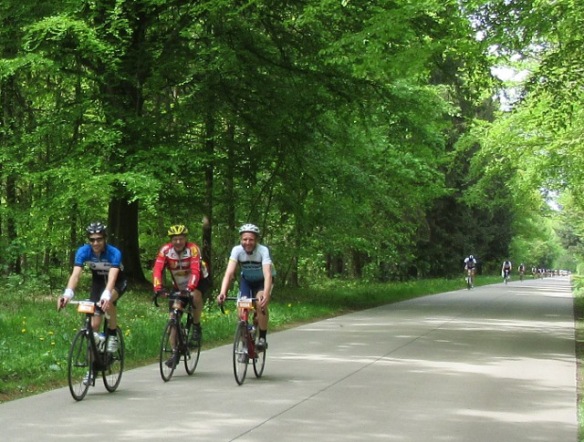 This area has an incredible number of chateaux, many not on any promoted tourist itineraries and our organisers routed us past some of the nicest.

As I have also mentioned in previous posts this is also an upside-down landscape, you climb up the hills to get to the flat fields and farming country because inland Belgium is mostly one huge plateau with the steep sided valleys cut by rivers and streams. Here the wide open spaces stretched between the valleys with the frequent wind turbines harvesting the stiff breeze while the rape seed fields glowed an almost artificially bright yellow.

And like any serious bike ride around Namur this one has to conclude with a trip up the cobbled access roads to the Citadelle, the huge fortress that guards the confluence of the rivers Sambre and Meuse. My third visit (and fourth ascent) in just six months! (Posts here and here from the winter)

Did I mention the hills?

Just between you and me this was probably the toughest ride I have had since I started my little MAMIL phase.

I can’t really put my finger on it. I haven’t really felt 100% since the Tour of Flanders Cyclo, I picked up a nasty virus for three weeks, but I thought I was well over the worst. The reality may be that I am just not as fit as maybe I thought I was.

I have a strong suspicion about my ride companions too. All that guff about mixed abilities, not riding much and we won’t go too quickly – where did that go? No beginners here, different pace at different times of the ride but after over 130 km they were all still riding strongly. I did nearer to 2000 metres of climbing at an average riding speed of 25km per hour (16 miles per hour) which is faster than I did the Tour of Flanders. However was on my knees by the end. As early as the third climb I was already scaling back my ambition and pacing myself carefully because I felt I was not going well.

Over 130km? Yes well that was unexpected too. I was carefully conserving my last ounce of energy for a big finale up the Citadelle when we unexpectedly left the route. I was spinning along in wise old man position near the back and by the time I got the message it was too late to escape. We were taking an extra 7km because quote “the best hill in the region is just off the route”. Oh joy.

The Triple Mur means the “three walls” and round here we know that any hill steep enough to be given the label Mur is going to be steep. Muy de Huy, Mur de Grammont are legends of the spring classics. Triple Mur de Monty has three distinct walls peaking at 21% gradient and by the last I was at walking pace, if not exactly off the bike. It would not have been popular in the audience for the Cyclo. It wasn’t that popular with me.

When I had finished the Triple Mur that was me just about over, the flog up the Citadelle was just that, a flog. The way you can tell by reading the blog is that there are no pretty pictures of riders cruising up all around me, simply because taking my hands off the bars and reaching for the camera was out of the question. The climbing photos in the Citadelle and some of the background shots come from the commercial photography service that was once again all around the route, a great idea. (Which reminds me, all the marked photos are © sportograf and covered by their copyright policy, not mine.)

However being tired is kind of expected, it is rather the point of entering a challenging cyclo after all. And without those valleys this area of Wallonia would not be as special.

So well worth it. In hindsight!

Now I can definitely have a break from challenge rides for a while.