I recently published a short article on the ECF web site about my visit to the newly opened extension to the home of Royal Gazelle bikes in Dieren, Netherlands.

Link by clicking the picture or here

It was a thoroughly enjoyable and interesting day in all sorts of ways so idonotdespair.com gives me a chance to jot down a few extra musings and some more photos.

Regular readers will know I have a soft spot for iconic bicycle brands, but generally I have written about racing brands like Bianchi or my classic English fixie. However Gazelle is in every way a classic of an entirely different kind.

As i was travelling to Dieren on the train a young woman stepped on and stood her bike next to mine.

A moments glance showed that it was both absolutely normal and incredibly distinctive. Those extraordinary swept back angles with the front wheel projecting right out in front of the high handlebars are as Dutch as tulips and Edam cheese. Sensible chain case, single gear, integral lights and lock. It was of course a classic Gazelle, the archetypal Dutch bike, almost designed to force the rider to adopt a laid back position, to relax and treat cycling as a sensible daily transport choice. A triumph of 20th century bicycle design in its own way, millions sold over more than 100 years. 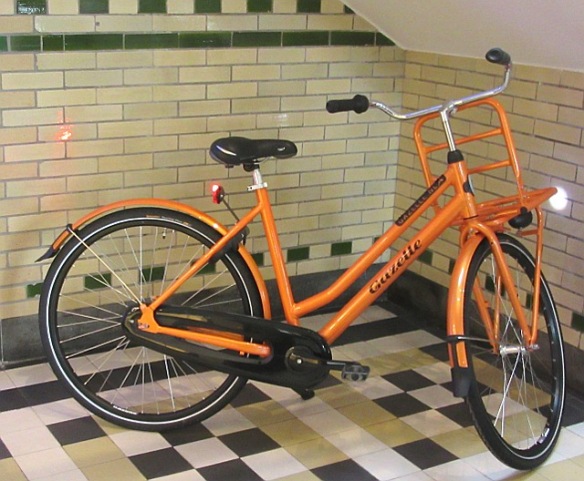 The modern design that Gazelle chose to represent their link to the Dutch Royal family is every bit as practical with the sturdy front rack that now seems to be compulsory on every Dutch city bike, but perhaps it has lost some of its distinctiveness as it looses those sweeping lines on the traditional model. Any colour you like as long as it is orange on this particular day!

Part of the fun of this trip was to see the Gazelles at home in Dieren. I must admit when I got the invitation I had to look Dieren up, I knew vaguely that it was somewhere near Arnhem but frankly I had never heard of it. However it quickly became clear that when I got there that this was an important part of the Gazelle heritage too. The “factory in a village” was mentioned several times in the various speeches and it is clear that everyone on site is very proud of the fact that the factory is still in the same little town where it was founded in 1892 and the new factory extension has preserved the same buildings that they have been in since 1902.

Clearly the Gazelle factory and the arrival of the King is pretty big deal because there was a nice small crowd in the street outside the gates and many houses had decided it was well worth recycling the flags from national day.

Inside the same themes of modernisation and efficiency but preservation of heritage and quality were blended. We had tours of the production lines and quality laboratories in between the ceremonials and hospitality. This was very much dressed up for the occasion but I do like being inside factories and having a nose around. In my pre-cycling career I spent ten years in and around factories so I love poking around somebody else’s back yard and seeing how they operate.

In bike factories the show stopper is always wheel-building, an wonderful merger of human dexterity and automation that I could stand and watch for hours, it is mesmeric.

An excellent day out, my thanks to PON and the Gazelle management for my invitation to be part of their celebration and to broaden my appreciation of classic Dutch cycling heritage.

2 thoughts on “Dutch bicycles at home. A visit to the Royal Gazelle factory in Dieren, Netherlands”