Recently my colleagues who manage the wonderful international EuroVelo cycle route network asked us all in the ECF office if we had some EuroVelo memories or trips we could share as part of an occasional series on their web site.

My short story was published this week and it has prompted me to pull out the photos from a favourite trip from the days “BB” (before blogging) and write this short piece about that 2006 trip.

I chose that ride as my featured section not just because it is an absolutely lovely place to ride a bike. It was also a very important personal milestone.

Around 2005/2006 I was working at CTC in the UK, but we were taking an interest in whether there was value for us in various European associations, including ECF. As part of that process I was nominated to attend the ECF AGM which in 2006 took place in the city of Klaipeda on the Lithuanian Baltic coast. I was a bit surprised by the location which was a city I had never heard of and not exactly accessible from the UK. But I found out in the build-up that the city was on the developing Baltic Sea Cycle Route, EuroVelo 10, and the AGM was planned as part of a project to promote the route.

Even better the AGM offered a 3 day cycle tour along the route immediately after the meeting and it coincided with the late May school holidays in the UK so my wife and son could come along for a bit of an adventure, Lithuania being a place none of us had ever thought of visiting, let alone cycle touring.

We had some nice rides in Klaipeda during the meeting which showed off the gradual greening of this port city which was recovering its independence after years as a tightly controlled part of the Soviet transport infrastructure.

But the star turn was to ride off with about 20 other ECF delegates for our cycle tour. We took a ferry across the mouth of the Curonian lagoon which is separated from the Baltic Sea by a remarkable natural phenomenon, the Curonian Spit.

This 98km long narrow strip of land is one continuous sand structure stretching along the Lithuanian coast and continuing to the Russian enclave of Kaliningrad, still Russian territory after the breakup of the USSR because of its strategically important port.

We were able to ride along the spit as far as Nida along stunningly quiet roads and dedicated cycle tracks through the tranquil forests, sometimes following the lagoon and sometimes touching the shimmering Baltic coast. 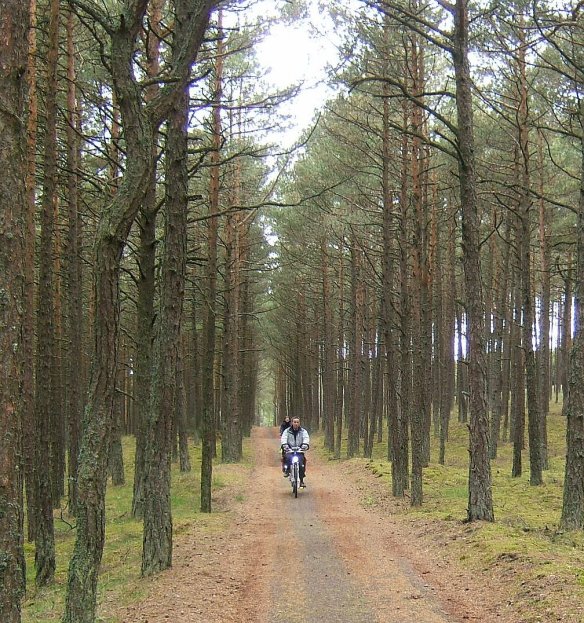 Stops on the way included a whacky sculpture park in the woods, Europe’s highest sand dune and lunch by the water, tucking into the most succulent and aromatic local smoked fish, washed down with a local beer.

Our day’s break in Nida allowed us to explore the dunes and look down over the watch towers into Russia. Today Nida is a tranquil tourist spot, most famed for its association with German author Thomas Mann who had a summer house here in the 1930s, now a museum. The houses are lovely, wooden cottages painted in vibrant colours.

The return trip was not the Baltic Sea route, instead our guides had booked the local water taxi to be filled precariously with bikes and sailed back across the lagoon to the mainland.

There was had a truly memorable meal at the old lighthouse on Vente Cape, which used to guide ships across the lagoon. Now the lighthouse is the centre of an important ornithological station, catching and ringing migratory birds as they migrate to and from the Arctic regions.

The meal was memorable because the lighthouse keeper’s wife took us into one of the rooms of the house, sat us at long benches and filled us with the most amazing spread of traditional farm cooking any of us could imagine. Cheeses, hams, fish, butter, pickles and jams were all her own produce, even apparently the glass of firewater we had as a digestif. She did apologise that the bread was not made with her own yeast, hers had died off and she had to borrow some from a friend – like we could taste the difference? We still talk about that meal ten years later, it was in itself a step back in time.

It was hard to get cycling after that great lunch, but I can report we did make it back to Klaipeda at a very sedate pace!

In itself an excellent cycle tour and one that is well worth sharing.

The personal milestone? That trip was the first time I really met the international community that makes up ECF and its networks. When I went had no real idea whether CTC as an organisation would fit well in that community, nor how it really worked.

The rest, as they might say, is history. I went back from Klaipeda enthused by them all. It really was a community of like-minded spirits, passionate about what cycling could do for their countries.   They were also an open and hospitable group who made us so welcome as newcomers, a tradition that continues right across the association and has led to so many of the wonderful experiences on idonotdespair.

Ten years later I am totally embedded in that community and I regard many of the people we met in Klaipeda as friends, and I am sure they will be for many years to come. Thanks to the EuroVelo team for helping me rekindle those memories on their ten year anniversary.

1 thought on “A trip down memory lane: The start of a special journey – Riding the Baltic Sea Cycle Route in Lithuania”