I made my first visit to Finland last week, spending a day in Helsinki and a day traveling cross country to see Herrmans, an innovative cycling company.

I have no doubt this was just a taster because there are a lot of really interesting things happening in Finnish cycling, especially in Helsinki, so I have lots of excuses to go back.

And who could not be drawn to a city that showed off glorious sunshine, lots of attractive green space and water and the chance to potter about by bike easily and safely? As a refugee from the dreadful June weather that has seen Belgium break all records for rainfall this was just about perfect! 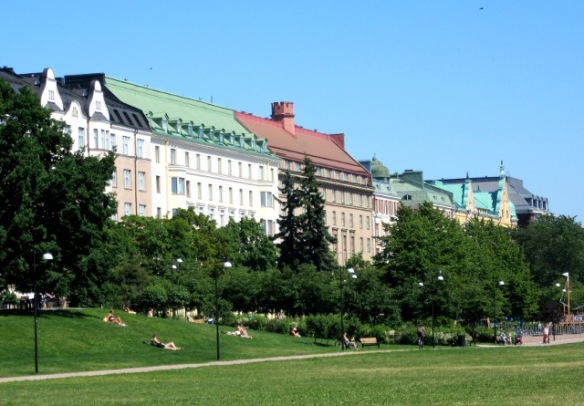 One of my mental tests for spotting whether cycling is part of the city lifestyle is to see how many people use their bikes just to nip to the parks and waterfronts when the sun comes out – and Helsinki passed that one with flying colours. Every open space seemed to have a few people chilling out in the rays, and beside them their bikes, the best choice for a summer day.

I had a series of meetings around Helsinki that had been arranged for me by Matti Koistinen from Finnish Cyclists’ Federation, so this was a chance to put city mobility to the test, in eight hours I tried rail, tram, cycling and walking and I can say all of them connected up well. Of course my favourite was to get the bike share bikes which we used for our city centre connections. The city bike share is almost brand new but apparently it is already one of the most intensively used systems in Europe with hires up around 9 per bike per day, even though it is only half way through its roll out.

It worked pretty smoothly, except at the start where the system stubbornly refused to offer the possibility of two bikes on one account costing Matti a good deal of frustration, but once resolved we were away.

The bike rides may have been relatively brief but combined with the walking and contacts made at the meetings I came away with two very strong impressions.

Firstly there is no doubt whatsoever that in cycling terms Helsinki has “something of everything”.

There are delightful leisure routes in parks, the old railway line Baana provides an incredible car free slice through the city, there are segregated Danish style cycle paths, there is cycling on pavements and there are places where we bumped around on cobbled roads that could have been straight out of Belgium. 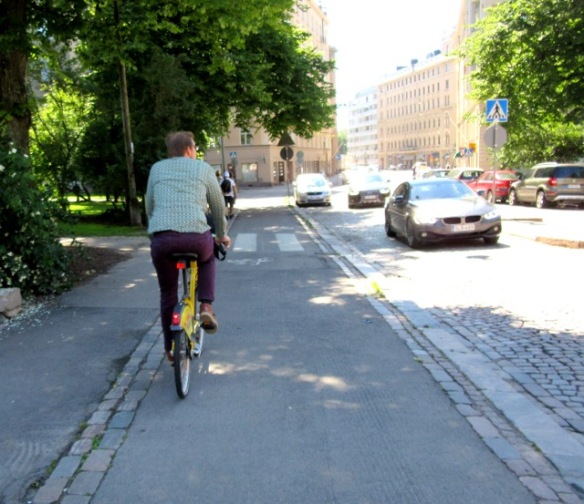 The parks, waterfronts and cafes were busy giving the place a vibrant feel and in cycling terms this was matched by the obvious numbers of city hire bikes in use, often in small groups, and the cycle parking was often full.

I was glad I had Matti as a guide because the cycle path layouts were sometimes a bit confusing and I was told that it is an almost universal problem in Finland that almost nobody knows which pavements are allowed for cycling and which not, so everyone just guesses.

But I never felt unsafe at all and the inner city traffic speeds were mostly 30kmph which is widespread in Helsinki.

Cycling numbers were not overwhelming, I could guess the 10% of traffic that the city claims, so on a level with Stockholm but way behind Copenhagen at the moment. That means there is someone on a bike round every corner, but the bike lanes are not crowded, yet.

Which brings me to my second observation. Ambition.

One of my reasons for coming to Finland was to try and get some insight into why Helsinki seems to have shot into my consciousness in the last two years as a city with big ambitions to change its mobility.

Possibly I am biased, because working with the Finnish Cyclists’ Federation I have been tracking their successes over the same time frame and I have to say Matti and his colleagues are doing a great job as a relatively young organisation, making sure cyclists have a really professional voice in the debates.

But there is certainly more. The city has stated that by 2025 “no citizen should need a car” because of their development of an integrated travel approach called “Mobility as a service” which should combine all travel modes and all tickets in one service. The city and the government hope this will make Finland a world leader in new mobility. There is a city masterplan being developed that has a lot of very ambitious plans for cycling, walking and public transport.

And in cycling terms the money is being spent. Yes new bike share, but also serious cash on new cycle routes like the a flagship route from Töölönlahti Park through past the Finlandia Halls to the Contemporary Art Museum where it also connects up with the Baana and eventually an underpass to the station.

The city is going to bid to host Velo-city 2019 which regular Idonotdespair readers know is my annual cycling highlight with a week spent going mad for cycling with thousands of other policy wonks. I can’t comment on the merits of Helsinki’s bid, but no city ever aims to host Velo-city unless they think they are going to have something special to show by the time we all turn up. If it was held at the Finlandia Hall those new bike lanes will certainly be a great showcase. 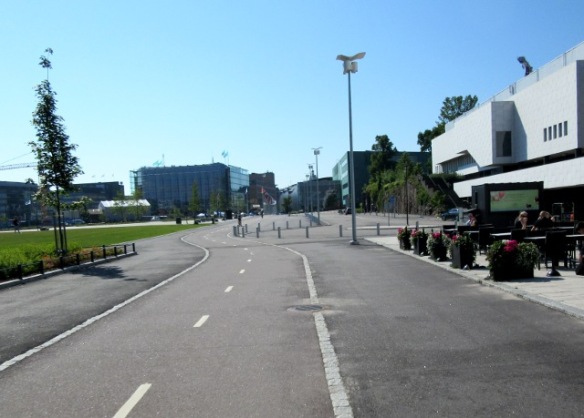 I came away with an overwhelming sense of “if”.

If even part the plans in the pipeline really come off Helsinki could be one of the “game-changer” cities in cycling, I suspect growth could be massive. A healthy, outdoors oriented population with a relatively flat and accessible city? Even the early numbers on the bike share and the Baana show the potential is just bursting to break out.

If they sort out the muddled, inconsistent approach to cycle infrastructure and get the whole network to join up effectively. If they double bike share, and maybe double it again to cover the whole city. If the integrated transport planning and “mobility as a service” really drive cars out of the city centre. If they stop road building and recycle the money into public transport and cycling. If the bike lanes are properly cleaned and maintained even in the depth of a Finnish winter, so people don’t forget how to ride for five months every year.

If all the stakeholders really start working together well and join up all their ambitions, because there is a lot of energy, ambition and creativity around.

Oh and if they do, I told the city cycling officer, they have no idea just how much cycle parking they are going to need. Plan now, then double it, and double it again. Because you are going to have a real bike boom. A nice problem to have. 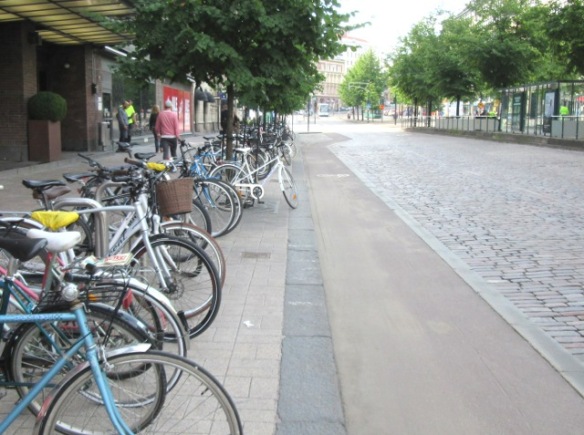 We ended my day trip round Helsinki at the home store for the Pelago bike company. Achingly cool bikes with a traditional look and feel, perfect for elegant transportation round a vibrant city and feast for my eyes.

They are a Finnish success story, exporting their bikes throughout Europe.  Perhaps a model for the future of cycling in Helsinki which could also be a European success story of the future.

More reasons not to despair.

11 thoughts on “A cycling day in Helsinki”