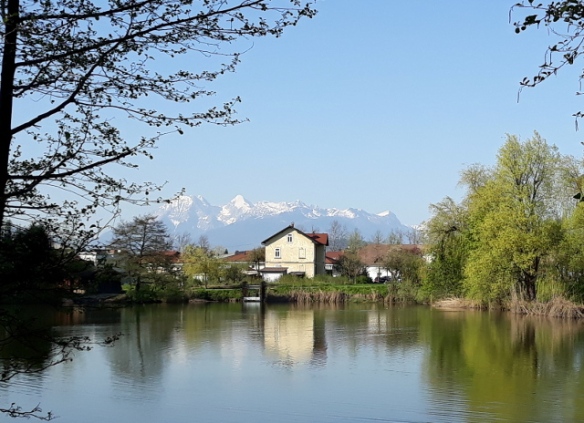 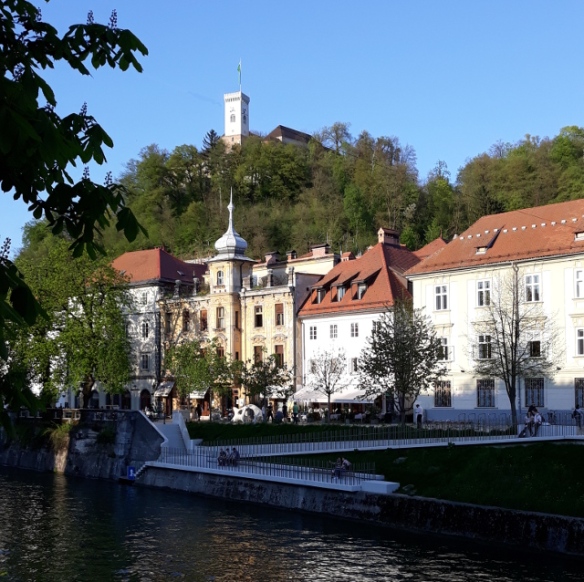 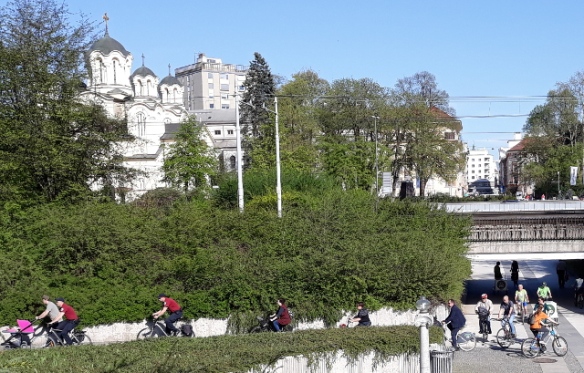 Many elements came together last week for a memorable bike tour around Ljubljana, capital city of Slovenia.

I had already rather fallen for Ljubljana’s charms on previous trips, (post here) but this time I had a glorious spring afternoon and great company to see completely new areas of the city.

Some elements of a great bike tour are not within the gift of the participants or the organisers, most importantly the weather. An unexpected heatwave has hit most of Europe this week, switching temperatures from late winter to almost summer in a matter of days.

This meant spring was bursting out almost everywhere, with blossom and emerald greens creating a colourful palette for photography and the warmth rushed everyone out into the streets and parks to soak up the rays.

For a city close to the foothills of the Alps this also means the mountains behind are still snow-capped and stunningly beautiful in the strong sunshine.

I was attending an official function to welcome the City of Ljubljana into the Cities and Regions for Cyclists Network of ECF, so the ride kicked off with a small ceremony on the steps of the City Hall with Vice Majors Janez Koželj and Dejan Crnek. (Official coverage to appear on the ECF web site soon) Janez is the political lead for mobility in the city, and as well as being the Vice Mayor he is a professor of Urban Design in the Faculty of Architecture at Ljubljana University, so I was told he has brought a completely different mindset to urban planning in Ljubljana.

What was really good was that he then led the bike tour, giving me lots of personal insights into the city, its history and the changes that have been happening. I wrote a blog post last year about the very special nature of a bike tour led by local cycling advocates who present their city in a totally different way to a tourist ride. Well in this case it was almost combined, because the man with the activist mindset was also the man in charge! This also influenced the route choice because instead of a trip around the city centre highlights we immediately left the centre to sample various bits of infrastructure that create a green corridor out past the city zoo and into surrounding parkland that includes post-industrial restoration. Janez was able to fill me in on bits of history and city design as well as his approach to “just getting things done” as a philosophy for change. (Very cool wooden bike too, made in Slovenia) 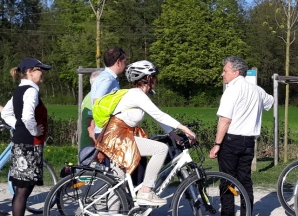 The second element of enjoyment was feeling the development of cycling in Ljubljana. I have been here twice before when I was impressed by the level of cycling in the city centre, even on cold winter days. But getting out from the city it was clear to see the growth that has taken the city’s mode share up to 15% of traffic, making it a regional hot spot and fast approaching the higher leagues of cycling in Europe.

On this trip that wasn’t visible in streams of cyclists in any one spot, it is just clear that cycling is being completely normalised. Cycling to shops, bikes at the cafes, bikes in the park, kids in child seats, people walking and talking with bikes at their sides, in fact bikes just about anywhere. It was very interesting to see that as well as the more conventional cycle lanes and routes there are lots of complementary activities such as continued expansion of car free areas in the city centre, or cute ideas like a bike play area for kids on a bit of waste land that had previously just been used as a car park. (big kids may also have played on it too!)

I can see the frustrations of local cycling advocates because some of the infrastructure is inconsistent in design, continuity and quality, so one senses that this wave of cycling growth could go much further and faster if a focus on cycling continues and completes the networks to a high quality. 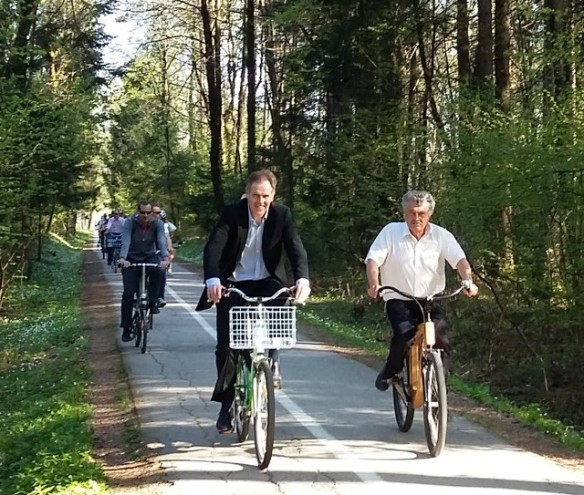 Last but not least – great company! Ok, not one but two Vice Mayors made it a formal occasion at the start, but we were joined by a nice group of friends and supporters from the Slovenian Cyclists’ Network to chat with and discuss things as we rode around.

Cargo bikes too, carrying the flag for a sector that is only just starting up in the city and will certainly become a feature if we follow the trend everywhere else that has developed a strong cycling culture. Always good for a promotional photo too! 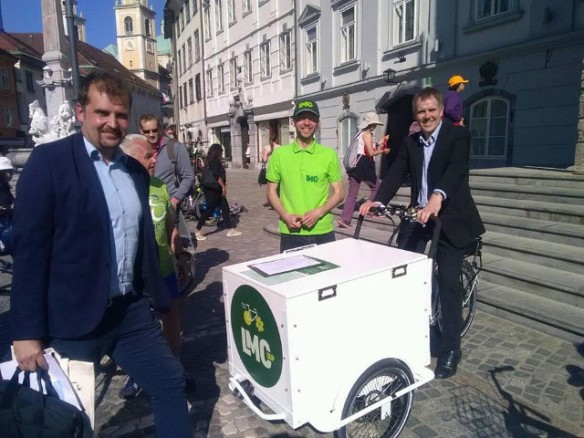 It may only have been a couple of hours, but a ride like this lingers long in the memory, with the perfect combination of people and place. Ljubljana is fast becoming one of the favourite cities from my recent travels, I think I am going to need a few excuses to keep coming back!

1 thought on “Great people, great cycling and perfect weather – Ljubljana provides all the elements for a perfect cycle tour”