A short trip to Paris enabled my son and I to do our own test of two new features of life in Paris – the linear car free routes along the Seine that have been created by the simple act of removing cars from the watersides, and secondly the proliferation of shared, free-floating, electric two-wheelers. But in a departure from our usual choices we decided to join the cool gang and try the electric scooters from Lime that have appeared on the streets in the last few months.

The verdict is definitely positive, on both counts.

We were in Paris for a few days which were planned to be strictly tourism, lots of walking and metro hops around the great sights, interspersed by significant quantities of good wine and food.

But that didn’t stop my eyes being constantly drawn to the movement around me. I only get to Paris for occasional business trips so I haven’t had much chance to check out the changes in mobility that seem to be in my news feeds almost every week. But three days based in the heart of the Left Bank meant it was right in my face.

From the very first trip sailing along the Seine on the Bateau Mouche tourist boat I could see the new atmosphere of deck chairs, pop up bars, cycling and walking all the way from Île de la Cité to the Eiffel Tower. While walking we crisscrossed pedestrian bridges and alongside the river were a mixture of bike lanes. 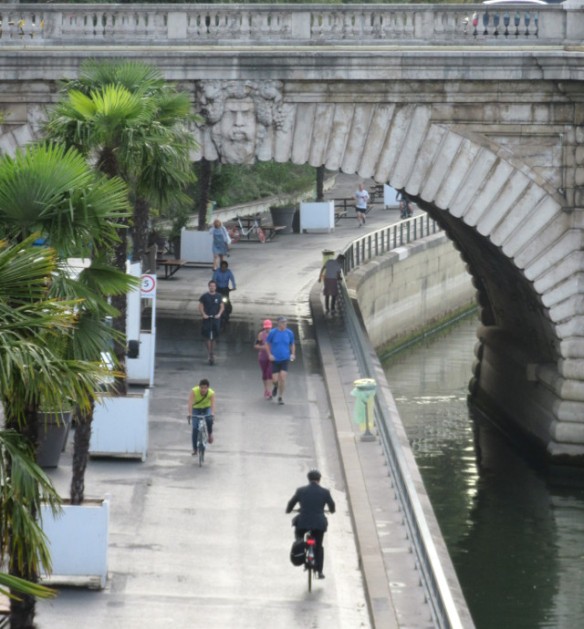 More importantly there were more cyclists than I can ever remember in Paris.Still behind many comparable cities further north, but I can definitely see the change.

What was really new was the nature of the cycling. I have tried out Velib before, but this time there were all the new arrivals of floating dockless bikes, numerous e-bikes, cargo bikes and the ubiquitous delivery food delivery riders, blended with a mix of city bikes and classic French designs. 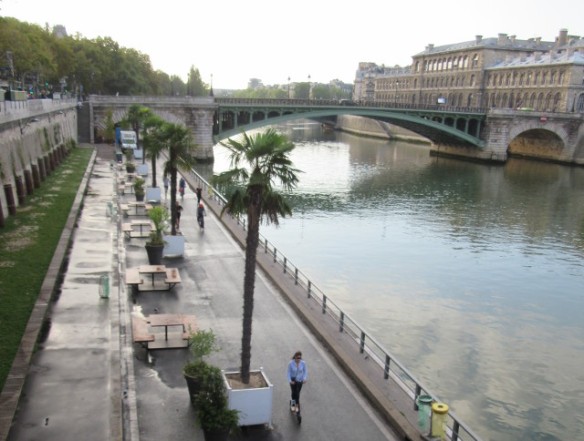 The term scooter could cause a bit of confusion here, because there were shared electric mopeds, technically scooters. But I am talking the trottinette electrique, the grownup version of the small wheeled kids scooters that have been around for a very long time.

Worldwide there is a growing market for the powered scooters as an alternative to e-bikes, I think partly because they are perceived as quite cool, but also because the small sizes are so convenient for combined mobility, I see them very often on my train just folded up by someone’s feet. This convenience has clearly stretched the Paris authorities, the restrictions notice at the Cathedral of Notre Dame is very up to date.

In Paris we saw the alternative, free floating shared scooters from two companies, Lime and Bird, both of which are rolling out rapidly due to significant speculative investment from backers looking for the “next thing” in mobility.

Now I haven’t sold out, I am going to be pedalling on, but as we were on a fun trip Ben and I decided to get up early and try out the scooters, especially as we had the riverbanks as a test track.

Based on our judgement it would be very easy to switch from cycling to the scooters. There’s a lot that they have in common with bikes, especially e-bikes:

We had a great time, especially on the riverside paths. Regardless of the transport choice these are a fantastic change for any city. Joining people cycling, walking, jogging and scootering together through the heart of the city makes it easy to forget that for years these were no-go zones, cutting the city off from its river and making the environment noisy, smelly and dangerous.

And these paths are the places that proved for me that these scooters are not the enemy of cycling, for me they are going to be part of the mix that gets people out of cars. Scooters felt quite natural alongside the bikes and joggers and the quiet movement is not an intrusion. I hope they will also be a bridge to cycle use, or more likely e-bike use, because they don’t contribute to physical activity, but that is really the only downside. If they help reduce car use they will promote cycling anyway, so they are part of a win-win in my view.

Mixing with traffic wasn’t as good when we tried for short stretches. The scooters are not quite as easy to handle as a bike and I felt a bit exposed, and small wheels do not like poor road surfaces, of which there are a lot in Paris’s old streets. Quite why that was worse than on a bike I am not sure, maybe just familiarity and it is perhaps not so different to cycling in unfamiliar traffic. One factor for sure was speed, of which more below.

Also one the weaknesses of the cycling network around the Seine is that navigation is very disjointed and the cycle paths away from the immediate riverside are a complete mish-mash of designs, so we often couldn’t quite tell where we were meant to be. That does encourage jumping up on the pavements I must admit and I don’t blame anyone for that because the untamed roads are intimidating. 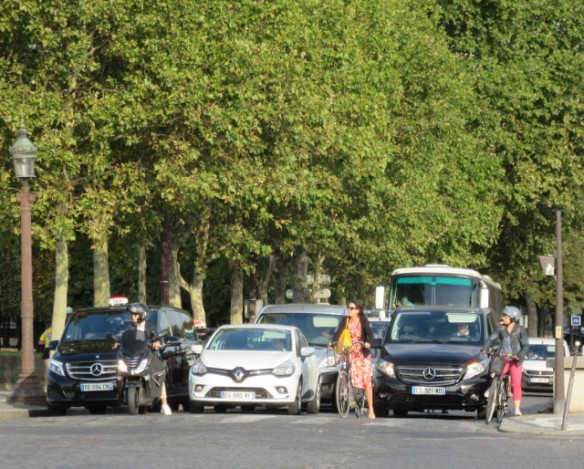 That aside, it was a lot of fun and we were smiling and buzzing about the ability to enjoy Paris sights when we got back to Notre Dame and de-hired the scooters (carefully, to the side of the the pavement) 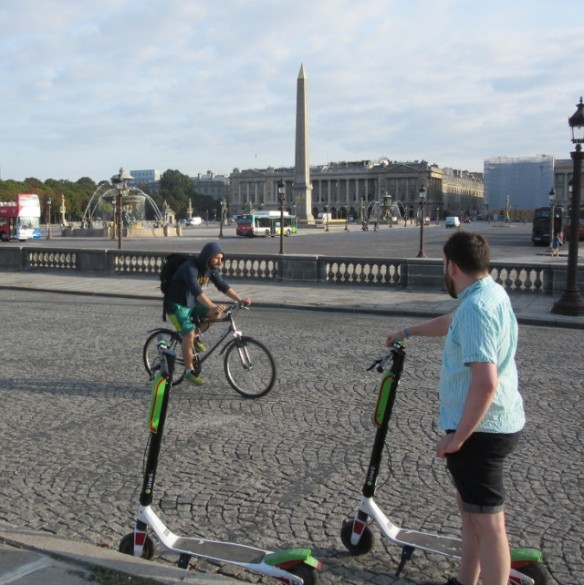 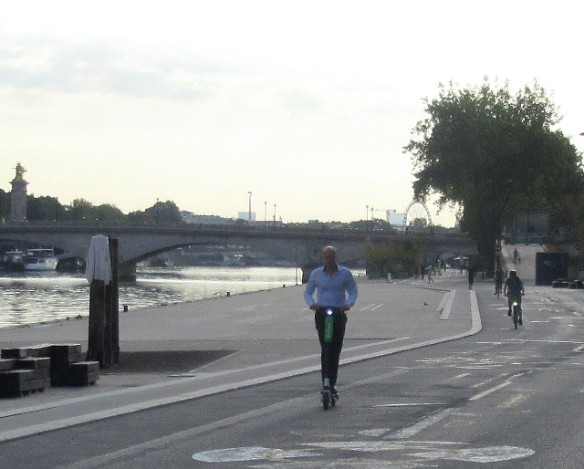 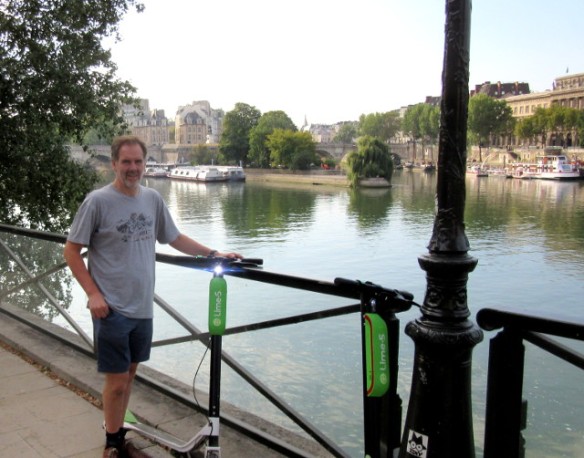 I have one caveat.

30 kilometres an hour is for me too fast. It is fun to press a throttle and accelerate up to top speed, especially on wide open and smooth cycle paths. But just like speed pedelecs anything over 25 is too fast in mixed use spaces. And in my view these scooters are not as stable as bikes, the small wheel and the weight balance makes them twitchy to ride and very susceptible to all the potholes and deformations on the road, and one brake is insufficient at 30kmph. However all that can be fixed, by regulation or by the agreement of the industry, and then they are another addition to two-wheeled transport.

Bike advocates may not embrace them with much enthusiasm, but I think maybe we should save our fighting energy for the real battles?