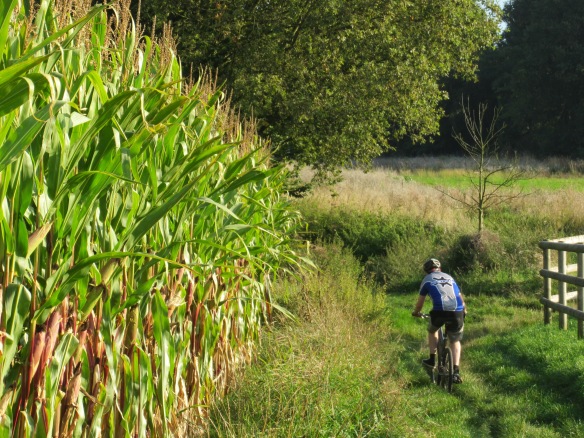 My son and I came back to the house and there was only one thing to do.

Glorious late evening light. No breeze worth mentioning. Eager dog ready for the off. We rode. 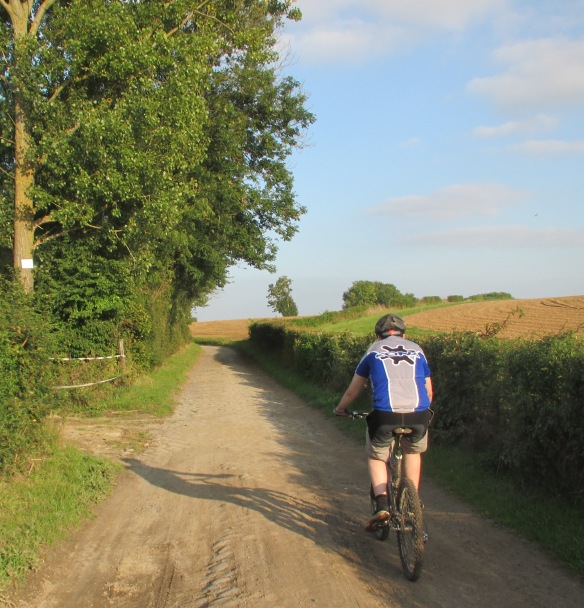 I was lifted up. Oh I needed this. So good to have all this on the doorstep.

And we were not alone.

Thanks Ben, thanks Murphy.

I take a certain pride in posting this clip from the British Universities Mountain Bike champs last year which has just been sent to me. To get the full effect tilt your head to the right, then you will realise the real angle of the hill by the way the spectators are standing.

About 2min 30sec into the clip the man rolling down the hill is my son, on his way to collecting a broken wrist for his pains. I must say I’m quite impressed by the roll, he must have been going for it at the time. What makes it worse is that he was also the one falling off at 1.14. Doh!

Apparently the organisers were using a regular course for downhillers and set out a cross country course around it, including some sections from the downhill. As the student champs is as much a beer weekend as it is a race a lot of roadies and casual riders entered to support their mates in the main race, but they were totally out of their depth on this section and the chaos ensued. I gather the roadies were really angry.

This set me thinking about the relationship between cyclists and falling off. Look at the crowd in the clip – mostly laughing, and certainly gathered at that spot for the falls. Read the comments below the clip on Vimeo.  Mountain biking web sites and magazines love a good crash. However mag pages featuring horrible injuries have largely been succeeded by on line video, mixed in with the spectacular leaps and descents are always a good selection of big “offs”. Every one watching this hill will know the feeling, falling off is as natural to mountain bikers as getting on the bike, certainly if you are going to stretch your abilities at any point. Of course the top riders have a level of skill which means that they can ride things I can’t even walk down, but they mostly had their share of falls on the way to that level. On the road and track it is almost impossible to have an extensive racing career without hitting the deck a few times, if not you take up pursuit and time trialling to stay away from other riders.

Compared to most downhillers I am a wuss. Like most lads I got my first wrist break in a bike crash when I was 11 years old. Martin Fuller (I can remember you wherever you are) switched me as we were thrashing our bikes down the road outside his house. Broken scaphoid bone (wrist again) on the concrete velodrome in Cardiff 20 years later.

Pretty near miss too at Aston Hill MTB centre when I almost broke my shoulder and got 10 stitches in a knee. Actually the sign at the top should have been a give away “Full body armour and full face helmet recommended”.

Most of the rest of my prangs were losses of skin and dignity, and today I seem to suffer a bit longer from the bruises, so I am a bit more careful. But there is something really special about knowing you were just a bit on the edge of your ability, something that I would only ever try on a bike, not in a car or plane.

People whose route into cycling was largely commuting or touring would regard us as totally mad. How can we get people cycling if they think it is dangerous? Didn’t the films of Jonny Hoogerland being clipped by a TV car in last year’s Tour de France and knocked into a barbed wire fence set cycling back years?

I don’t think so. If we are going to get a whole generation of teenage lads off their backsides and away from the video games for at least a few hours we are not going to do it promising a nice ride to school and eternal salvation. Try asking your teenage lad to go and dig out your potatoes because the organic food and the exercise will do him good. You’ll probably eat the shovel.

Now let him and his mates loose in a bit of old waste land with the same shovels and a few BMX bikes and tell them they can build what they like.

Good parenting says someone’s going to get hurt, bring on the health and safety police. Really good parenting says “don’t come home until dark, and call me from the hospital if you need a lift back”. Bring it on.

P.S. This post is not approved by my wife, who really could not see the funny side of Ben flying. It’s a Mum thing.

Following a long tradition in the Mayne family we celebrated the new year with a bike ride. The ritual matters to us, we know that under the skin, no matter how overstuffed we are by the Christmas period we are at heart cyclists.

Getting the blood moving, opening the lungs and feeling the pedals turn over means that the year will be OK because riding a bike will be the physical and mental therapy that we fall back on when we are jaded.

This year we were three generations.

Geoff, Grandad, Dad – call him what you will. At 74 years old he has just completed a 14,000 mile year, one of his highest ever. Riding almost every day back in Bungay, Suffolk he is the picture of health. Those miles will have moved him still further up the league table for mileaters, the 300,000 Mile Club. You wonder why I became a cyclist – look no further.

And at the other end of the spectrum is son Ben, who as a student has managed to dedicate himself far more to his computers than his bike this term, but with no miles in his legs can still jump on a bike and join me for a couple of hours yesterday and over an hour today.

As the weather looked a bit mucky we did my byways route around Finchampstead, linking together dirt roads and minor tracks through Barkham and Arborfield until the increasing rain forced us home after about 90 minutes. Job done, honour satisfied, we have reaffirmed ourselves.