When a modern day re-enactment meets the challenge of recreating a 200 year old battle we all have to suspend belief a bit and get in to the mood.

As I said in my previous posts there were some organisational cock-ups that were frustrating and for some people might have ruined their enjoyment.

The travel planning certainly didn’t go according to expectations!

But here to close my coverage of our visit are five moments that just appeal to my sense of amusement and make me smile when I look back at my photos.

Bicycles to be involved of course. Two years after Waterloo Count von Drais invented a two wheeled machine for propelling himself around Mannheim. Perhaps he had other inspiration?

And of course if there is a party going on, anywhere in the world, do you imagine it could go ahead without a few Aussies and Kiwis gatecrashing? Hmm, wonder what to wear as a disguise?

In terms of the re-enactment itself we were placed close to the recreation of the battle for the farm-chateau of Hougoumont. In reality this sturdy example of Brabaconne architecture stood firm all day, resisting waves of French attacks and the same walls are still there today.

Unfortunately the model reconstruction was not so resilient.

Within 5 minutes of the first simulated attack the structures started to collapse like the very worst Do-It-Yourself project. In front of the grandstands we were highly amused by the French and British re-enacters handing each other bits of wood and scratching their heads wondering how they might create an air of invincibility. By day 2 the impregnable brick walls had transformed themselves into the barricades of a street revolution, and everyone clearly had instructions “Don’t lean on the walls”. It wouldn’t have been out of place in a TV comedy.

The actor playing the Duke of Wellington did a fine job looking authoritative and inspecting his troops. What was totally hilarious was the behaviour of the press gallery nearby who couldn’t help themselves and started behaving like the paparazzi on the Hollywood red carpet. “Give us a wave your dukeship”. “Over here, Duke, just a quick look”, “one for the press sir?”

Fortunately for them noblesse did oblige. Celebrity was probably easier in 1815. 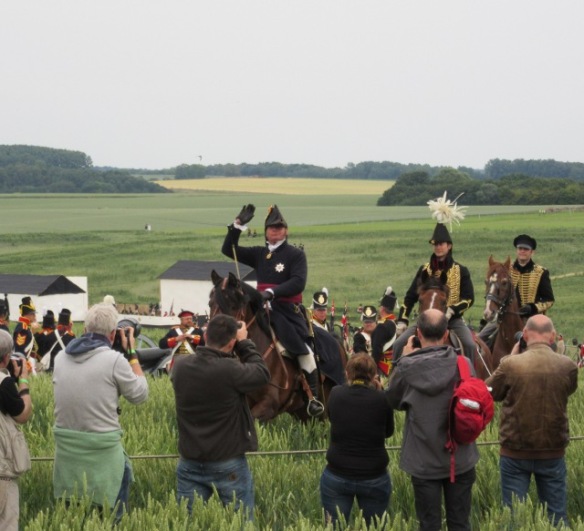 Finally of course we have to end with the intrusion of the smartphone.

To be fair the re-enacters were brilliant, when they went in to character all the modern stuff seemed to disappear, we saw no phones and the air was not filled with ringtones and bleeps.

Unfortunately nobody told this on-field steward, who seemed to spend half of both battles engaged in deep conversation. Quite how he carried on a chat with the Battle of Waterloo raging around him I have no idea but he somehow must have felt the smoke made him invisible to the 50,000 spectators behind him.

And one little group of re-enacters did lose their discipline, right at the end. When the Hougoumont farm re-eactment tailed off the “defenders” had probably the best view of the whole audience for the march of the French Imperial Guard. This was by far the most impressive sight of the whole two days as every French re-enacter on site was marched right down the centre of the battlefield. The relaxing actors clearly couldn’t resist a quick snapshot on their phones because it was a great sight. Probably no-one would have noticed, except for the fact that in the near dark those phone screens are a real giveaway.

This was not lost on some of the marching French troops who suddenly broke away from the main march and launched what was clearly an unexpected assault. There were phones flying all over the place and complete panic stations as they tried to get back into character!

They are all forgiven for providing us with such entertainment.