I was going to blog about cycling in Taipei but I was beaten to it by another attendee at the show. Journalist Carlton Reid covered the subject in BikeBiz and CycleHub. He highlighted that Lonely Planet thinks Taiwan is one of the top 10 countries to visit for 2012, not least because “Because Taiwan is best seen on two wheels and in recent years the authorities have embraced the biking market with surprising enthusiasm, vision and (most importantly) funding. This year sees the linking of thousands of kilometres of paths, including two round-the-island routes, and a host of other cycling friendly infrastructure projects.”  Read more

The most depressing outcome of my visit to the Taipei Cycle Show was that despite acres of bike bling laid out in front of me I failed miserably to get anywhere near riding a bike so none of my impressions actually come from the saddle. However I would find hard to believe thatTaipei is a cycle touring paradise from my snapshot. However “the beautiful island” will undoubtedly be a much better cycling venue outside the city.

I missed out because there are bikes for hire but the city bike scheme was like the old Brussels hire scheme, restricted to the central business district and useless outside. It is apparently going to be expanded to 5,000 bikes soon which will see it leap up to the scale of London’s scheme. 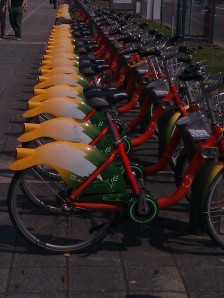 The other main bike hire points are containers alongside the riverside paths which open at weekends and insist that you leave ID such as a passport, not something you can realistically part with for a week long hire.

However unlike many of the international visitors to the show at least I made sure that most of my travel was public transport and walking so I could see what was going on at street level.

As a cyclist the biggest worry I would have is the complete sense of being alone, like being back in much of Europe in the 1970s when I was truly the lone weirdo. It is so easy to forget that even when we moan about conditions in so many European countries we still have the benefit of not being alone.

On the cycle paths and routes around my hotel in the north of the city the only cyclists I saw in any numbers were the lycra warriors training up the Jiannan hill in the evening.

In the centre of the city the very few cyclists were on the roads, but in ones and twos, swamped by the volume of charging traffic. The great deterrent

in my eyes wouldn’t be the cars, it was the scooters which were so dominant they even get the advanced stop lines (cycle boxes) instead of bikes.

I reckon the car drivers were actually quite cautious, probably because they were used to dealing with the scooters. I have always believed that this is the basis of sharing road space, worried drivers. The saying that the best road safety measure we could ever have is a big spike in the middle of the steering wheel stands true in my eyes, the scooters play that role inTaipei.

There is an excellent write up of the cycling scene in Taipei here which covers a lot of the points I learned about during my visit.

Instead of just a cycling blog pot I thought I would just wrap up some of my other impressions from the week.

My favourite feature ofTaipei was the MRT (Mass Rapid Transit). I’m used to the dark, smelly, overcrowded underground trains of Europe. The MRT is mostly overground giving the tourist a bird’s eye view of the city going about its business below.

Trains every 2 minutes, immaculately clean and polite passengers who don’t feel the need to push and shove even in the rush hour. Cheap too – about 1 Euro per trip.

And for the train geeks – they are driverless. The front of the trains is just a big window and as a passenger you can sit in the front window. I’m not entirely sure I felt at home up front, the is something vaguely reassuring about a grizzled man in a uniform with his hand on the lever at the front. Perhaps it’s Casey Jones on the telly when I was a kid.

One of the features of Chinese food are its regional specialities. So I was really looking forward to finding the indigenous cuisine of the island. However I learned from Tourism and Leisure Professor Hsin-Wen Chang of Chung Hua University that since 1949, when the Kuomintang under Chiang Kai-shek were forced to leave mainland China by the Communists, they brought an army and refugees from all over the mainland with them. This means that the many regional varieties are available in restaurants and food courts and original styles were lost.

Best meal of the week was a stunning Cantonese style meal with Hsin Wen with tastes that I have never had in any Chinese restaurant, even familiar shapes like tofu had new garnishes and tastes.

I was disappointed that a lot of places only appeared to offer western food, especially out near our hotel. But I realised that we were staying near the Miramar entertainment area for young Taiwanese and around a number of “wedding hotels”. Western food is an important aspiration, as is wine which started at €60 a bottle in one place we went.

But my delight was tea.

It is served with every meal, you sit at the table and a cup of light refreshing tea (without milk) is immediately brought to the table. This is referred to as poor tea, the lowest grade for general drinking.

The good stuff is Oolong tea, the tea ofTaiwan. Once I started reading I discovered that we should treat the tea like wine. The finest teas come from specific plantations at the top of the mountains and they attract the prices of the finest of fine wines. Also wonderful was the preparation, I went to a tea shop to buy some tea to take home and I was asked if I wanted a taste. It was a treasure to watch the shop assistant warming and testing, pouring off the initial water on the leaves and then serving the second brew to us, a process far removed from chucking a tea bag in a mug. In fact waiting for the tea was as much part of the relaxation as the drink itself.

I’m grateful to this blog that I found on my mobile phone which was great guide to tea making and buying inTaiwan.

A Taiwanese tea pot and a large tin of tea were a brilliant gift to bring home.

I really enjoyed the company of the Taiwanese people I met and I was trying to work out why.

It actually came down to one thing. Unfailing good humour and warm welcomes. Smiles, and politeness seemed universal and not just because I was a tourist. I also met so may people with a really great sense of humour, it seemed to be smiles all the way, always ready with a joke even if I was being a painful  and incompetent tourist or when English clearly didn’t come easily.

I had great fun in the food shops and restaurants whenever I asked for anything and out in public spaces like the streets and public transport everyone seemed much better humoured than we are inEurope.

But I can’t get used to a society where people feel they need to wear face masks in every public space, that really was alien. I assume it was against viruses rather than air pollution because many people wear the masks indoors as well as out. However it can’t take away from the general warm welcome.