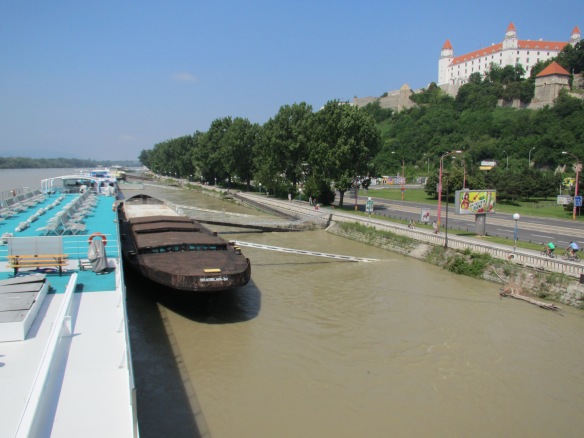 I have written before about how much I love being by the Danube with its promise of travels through history. However on this trip we saw another side of the great river, a treacherous beast only just held in check by mankind.

The recurring nightmare running up to our trip to Bratislava was that the city might be flooded by the surge of rainwater heading down after torrential rains right across central Europe. We were due to arrive Friday night and the peak flood waters were due just 24 hours earlier.

Consider that this is June. A month’s rainfall fell in two days across the high ground that feeds many of Europe’s great rivers, ground already saturated from the wet spring. Anyone who has been watching the Giro d’Italia bike race knows that it has been an appalling month across much of the Alps. Quickly the news showed the German town of Passau flooded by the Danube and its confluence with the Inn and Liz rivers. Then Prague was swamped by the Vltava River and all along the Danube and the Elbe communities were waiting for the surge.

Vienna itself was almost untouched because it has some of the most extensive flood relief systems in Europe, but now it was heading for Bratislava and Budapest. This was a particularly difficult time because after massive floods in 2002 the new flood defences in Bratislava were only a few years old and had never been tested.

During the week running up to the ECF AGM a planned cycle tour from Bratislava to Vienna was cancelled as the Eurovelo routes became impassable and nobody knew what condition they might be in when the waters dropped.

On Saturday morning we couldn’t resist a bit of voyeurism by walking down to the banks of the river in Bratislava. I was an extraordinarily impressive sight and one that made me realise just how precariously we try to control such massive bodies of water. According to reliable sources (our taxi driver) the river was carrying five times its normal volume of water. 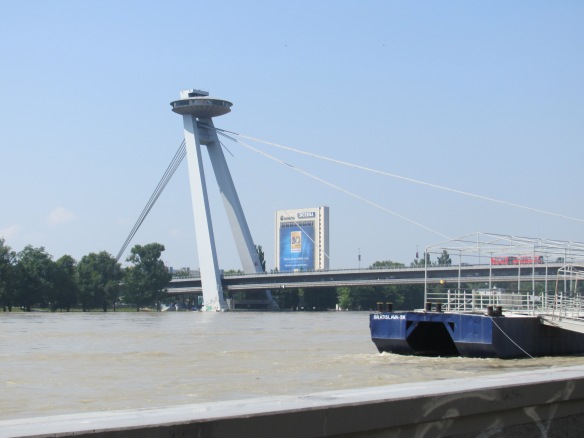 One day after the peak we could look across the giant expanse rushing powerfully by the city centre, almost on our eye level behind the flood barriers. It was clear from the lines on the side of the temporary flood barriers that this must have been a very near miss.

Ship traffic was banned because of the levels so there were working boats moored all along the banks, but most striking were the floating hotels, keeling over to one side because their entrances were moored below water level. Police were patrolling the banks to stop idiocy – people climbing onto the barriers or trying to get across to the boats I guess.

And it was all such a contrast to the scene behind the barriers. All along the banks are extensive cycle paths and there was an excellent foot and pedestrian bridge slung underneath the main car bridge into the city. 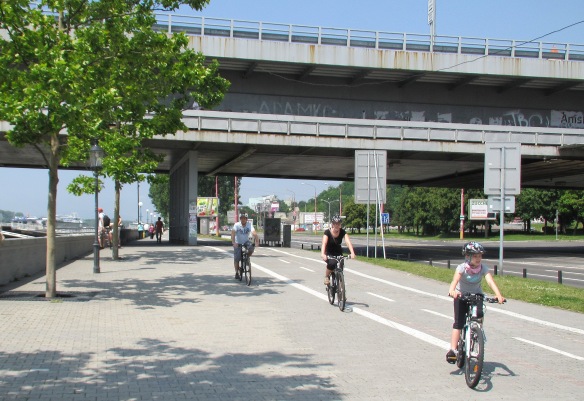 In the stunning warm weather we were among hundreds of people all out for what would have been family and friends bike rides around the river bank. However it was apparent that almost everyone just needed to linger that bit longer to take in the power of the river, and maybe to contemplate just how close they had been to another serious flood.