There are many special events in Vienna to celebrate its year of the bicycle.

Opening to coincide with our Velo-city conference two weeks ago was Tour du Monde, an exhibition at MAK, Vienna’s design museum.

It features the amazing bike collection of Viennese architect Michael Embacher which is normally kept privately but includes some of cycling’s design classics and some quite rare pieces.

We called in for the formal opening on the night of the mass bike ride at Velo-city (the Radcorso – story here). As even the German speakers told me the speeches were pretty dull I was glad I skipped them to take a wander round the collection. 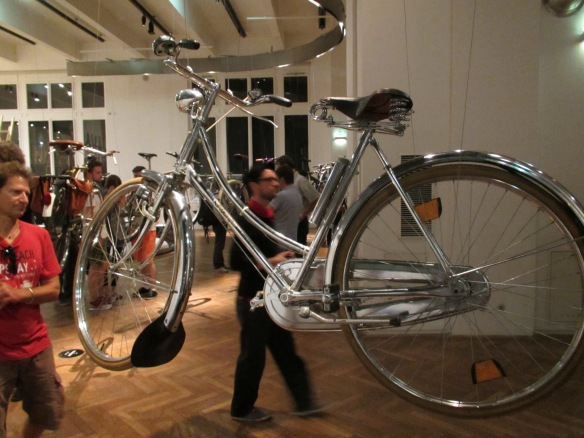 I am not really a bike technology buff but I really appreciate some of the classics and it was good to see them displayed well. They were hung as art from the ceiling and lit from above but the nice touch was that they were hung in sweeping curved lines which gave a nice feeling of movement in a static display. Almost like an aerial peloton perhaps.

Each bike had a short history on the wall too which brought them to life.

Embacher certainly has an eye for some interesting pieces, including famous racing machines and good old British steel. The post war Raleigh Roadster special edition export bike in chrome was pretty special, as was the Bob Jackson Super Legend with curly stays. (both above)

One I particularly enjoyed was the Gitane Enfant special edition road bike from the early 80s. I remember seeing them in magazines at the time, I was too old to have something that small but I remember thinking how cool it would have been to have been a French kid with a bike like that. Looking at it hanging in the exhibit it took me a moment to work out what I was seeing, it was this odd looking thing, but then it is clearer that it is a small bike with adult parts, more obvious when it was seen with its big brother beside it.

The exhibition is on until October – if you like vintage bikes or just good design it is well worth a visit and it is a rarely seen collection. Details here.

Another one of those diversions for the cycle tourist travelling Eurovelo 6 along the Danube this summer perhaps. To tempt you or if you cannot make it Embacher’s collection of over 200 cycles can be found here

Discount if you arrive at the MAK by bike too!