Last Friday I was taken to the front line of a full on cycling row that has erupted in Flanders, finally forcing the Prime Minister who was on a foreign trip on to the front pages of De Standaard to insist that he “would be looking in to it”

I have to share this storm in the tiniest of teacups because I don’t think we would see anything like this anywhere else except in the cycle sports mad world that exists around Ghent. And the story also has the dumbest punchline.

The background to the story is common enough. The community in Gavere, about 10km south of Ghent have complained that the “wheeled terrorists” have taken over their riverside and that they are constantly afraid. We have heard that before in many countries, most recently in the UK where there is a simmering row about the numbers of cyclists on canal towpaths or around the Olympic Road Race circuit at Box Hill.

However the difference here is the scale and the political fallout as the “terrorists” hit back.

The battleground is a long wide and perfectly smooth traffic free path that follows the Scheldt south from Ghent for miles making a perfect environment for cycling and walking.

But its strengths are its weakness.

The smooth asphalt is a beautiful temptation for roadies to fly along at speed and the width means that the sort of club groups that are common in Belgium can travel down it in big echelons, especially at the weekend. And we are talking big, I see groups of 30-50 riders where I live and round Ghent I guess numbers are huge.

And speeds are high, as we rode the three of us were doing close to 20mph at times and we were passed by faster groups.

So out of the blue a series of white “rumble strips” – the now notorious ribbelstroken have appeared across the path.

The first row was apparently whether they were initiated by the municipality or by Waterwegen en Zeekanaal (waterway and sea canals) who manage the navigation. Had the mayor of Gavere exceeded his authority? Or does the fact that they are spread over a wider area implicate the navigation managers?

But regardless of the origins of the work the sports cyclists were soon up in arms that anybody would mess with their training route. With their influence it soon hit the pages of De Standard and ribbelstroken became a new hot topic. While we were out for a ride there was another newspaper photographer out for the evening getting background shots and pictures of the offending strips. His presence prompted a stop for a lively debate by the roadside.

By Monday it had got to the Prime Minister of Flanders Kris Peeters, far away in France on a visit to Le Tour. Another distinctly Flemish twist, when was the last time your Prime Minister nipped off to see the Tour in another country? Well it was all above board, he was there as a guest of DCM, the Flemish company that co-sponsors the Vacansoleil pro bike team in the tour, not a jolly of course.

He probably thought he was away from domestic concerns but in France he had the misfortune to be ambushed by Vancansoleil pro Thomas De Gendt who it turns out likes to use the offending route for his speed training.

I have to say that the prospect of one of the world’s top riders doing 50kmph down a riverside path probably confirms every local citizen’s worst prejudices about wheeled terrorists, but he certainly got the Prime Minister on the spot. So by Monday the ribbelstroken were right up there on the front page news of De Standaard right beside the pictures of Chris Froome and within the day the Mobility Minister was out there riding her bike up and down the towpath with the local cycling groups.

Well it looks like the Mobility Minister was discrete in her words when she said “It was not as dramatic as I had heard.”

Not dramatic? It was pathetic!

This is a country with some of the finest cobblestones on the planet. Cyclists go out of their way to race over the rumbly stuff. It is the world centre of cyclocross. And frankly Belgian road surfaces can at times be almost third world. Anybody who remotely considers himself to be a serious cyclist around Ghent should be laughing at the pathetic little ripples on the path.

In line skaters – yes, big disruption. Wheelchair users – definitely an issue. So yes the strips will be cut back to allow movement round the ends. 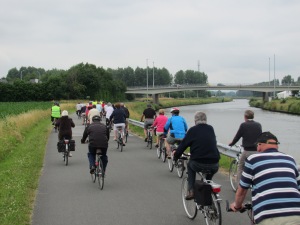 But the self-promoting hardest bike riders in Europe? Come on chaps, give us a break! Even the senior citizens ride didn’t bat an eyelid.

But the hard men of Ghent have spoken, apparently the experiment will not be continued.

3 thoughts on “Front page news – white stripes, wheeled terrorists, the Tour de France and the Prime Minister. Only in Flanders?”