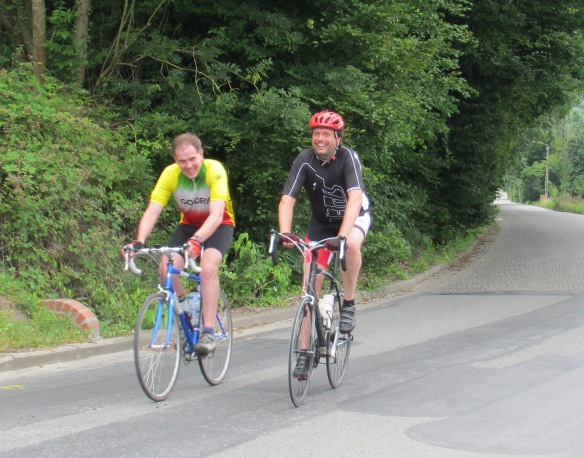 As a result of an invitation from Vincent Meershaert of Traject Mobility Management in Ghent I spent last Friday evening on a scenic ride out from Ghent into the Flemish Ardennes and some bits of the Tour of Flanders race route.

Only my second time there on a bike after my visit in spring to watch the Tour itself so I was very much looking forward to new discoveries, especially with hosts who were rightly proud of their cycling heritage. I got an invitation because like Vincent I am one of the “odd guys”, people who work in the field of cycling for transport and mobility but who also have a love for sports cycling. That may not seem too strange to an English speaking audience but in Europe it is actually quite rare, they are usually two different worlds.

What a great way to start the weekend with a beautiful 80km route put together by Vincent’s colleague Kristof. And to see first-hand how big the Wielrenner (sports cyclist) culture is around Ghent, even though it was Friday after work there were lycra-clad riders all over the place, clearly enjoying a warm, if overcast evening.

However we were not the only ones out, we found this great group of “seniors” out by the Scheldt too. 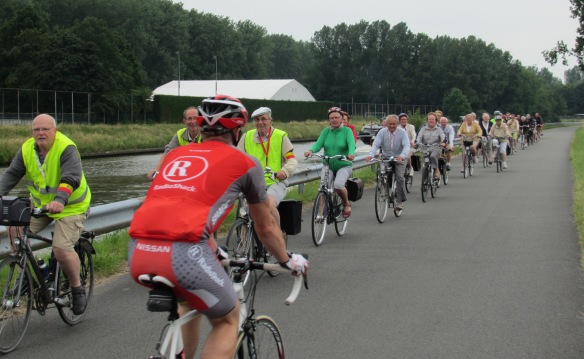 The ride managed to throw in a whole mix of riding that seemed to capture the area extremely well. As we were returning from the ride Vincent and I were musing again on the fact that Belgium is so little known for cycle touring, a combination of lack of marketing and the competition from the surrounding countries I am sure.

The only people I know of who would consciously head for this area to ride bikes would all be like me, drawn by the legendary black and white images of mud covered racers battling across cobbles in the spring classics. (See earlier post about the Ronde Van Vlaanderen Museum on Oudenarde) 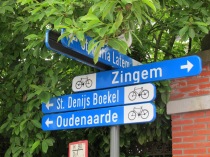 What we actually got was almost car free country lanes, excellent cycle paths, a 4 metre wide car free route along the river Scheldt and outstanding signposting and route choice. The tidy flower-filled villages and towns reflected the fact that this is a more prosperous area of Belgium and that civic pride is alive and well. Above all else the Belgians I ride with and talk to in both Flanders and

Wallonia are genuinely surprised when I tell them the very best thing about being here is just how deserted the minor roads and lanes feel to a visitor and tonight was no exception.  OK, we crossed some major roads but away from them it was peaceful cycling with almost no need to ride single file at all. Our group were sports cyclists, so our route took us well into the Flemish Ardennes by design, but flat earth riders could easily have stuck to the valleys for a very leisurely and attractive tour. 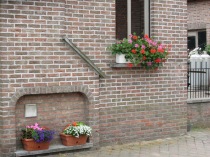 well surfaced and no more than 5-8% grade with occasional steep corners. Not to downplay it, 100km of these coming back-to-back with some of the steeper cobbled beast climbs thrown in would be a really tough ride, anyone completing the Tour of Flanders sportive deserves respect.

But that wasn’t why we were here, we were enjoying fun climbing to get lovely views over the countryside with its patchwork of fields, trees and church spires in every direction.  It was great to dip and roll with the landscape, both climbs and swooping descents. Some pave, but only one section was the full on experience of riding on a pneumatic drill for about a kilometre.

By the time we got back my legs knew they had been in a ride, but I was glowing with pleasure.

So once again I can issue the call to fellow cycling travellers. Come here. Get out of Brussels and Bruges, avoid the main industrial cities and try real rural Belgium, it is a great place to be a cyclist. More challenging perhaps to get the tourist authorities to market the area effectively to the outside world but I suspect that is part of a wider malaise in Belgium, it certainly seems to pride itself on “under-stated”!

Kristof put our route up on line so you can follow the route and the profile which at this scale does look a bit like shark’s teeth, but it wasn’t quite so fierce, honest. http://ridewithgps.com/routes/2711551

The main Tour of Flanders climbs we did were: