Time for another “Idonotdespair” moment, trying to get a snapshot of the cycling culture in a new city through the eyes of local activists, a short ride and some general wandering about. I was in Sofia, capital city of Bulgaria for three days this week which included a guided cycle tour of the city centre and a similar walking excursion. I have broken my usual collection of photos and comments into two posts, this one about the cycling experience and then a few tourist notes in a few days’ time.

I think the cycling can certainly be summarized as “far better than expected” because the country hovers towards the bottom of most European cycling league tables and expectations had been set fairly low by our hosts. But I found a lot of positives and yes it was so much better moving about by bike than walking!

We were in Bulgaria with delegates from small and medium sized cycling organizations as part of a programme to support European groups that are trying to make the jump from smaller, informal structures to try and create a national impact. So I wasn’t there on my own and that helped keep the differences in perspective. Coming to Sofia from the low cycling countries like UK, Greece, Ireland, Czech Republic and Ukraine it really didn’t feel vastly different to home, so we of course were able to share our experiences as “kindred spirits”. On the other hand at least one person in the mid rank of cycling nations who joined us (Austria, Finland, and Sweden) said she certainly felt a bit better about her home city after cycling here. 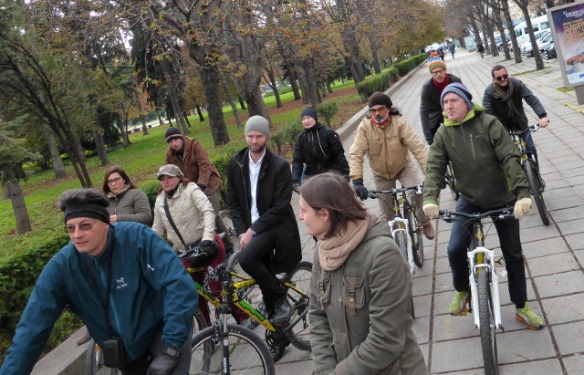 First impressions were not great. In the taxi from the airport we were faced by nose-to-tail traffic queues and wide high speed boulevards that made me suspect that this was another east European city that had embraced the car with enthusiasm in the last 25 years. It was not until we reached our city centre hotel that I was delighted to notice a cyclist, inevitably a hipster on a fixie jumping a red light. There must be a factory somewhere in Taiwan that just creates them and sends the whole unit over to Europe as one item, person, bike, trendy beard and colour-blindness included. 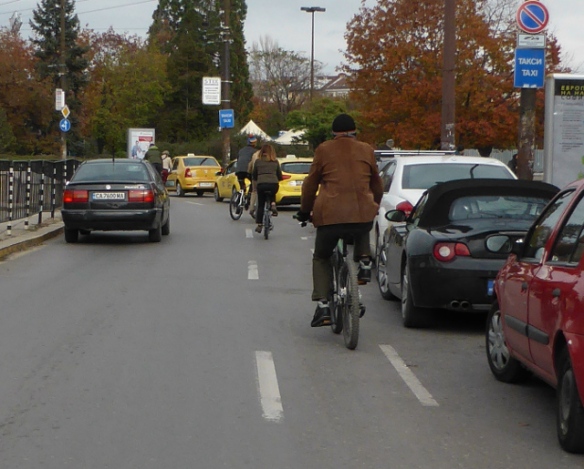 The start of our group bike tour the next day confirmed some of the poor impressions. We were cycling on multi-lane roads or encouraged to share the lumpy, poorly repaired pavements with pedestrians, neither of which was particularly appealing. The infrastructure gave no help knowing which route or what positioning on the road to take. Our guide did point out a few places where there were once cycle lanes and the paint had worn away and suggested the city really didn’t know what to do with cyclists now. I was very grateful that we did have a host to start with, it gave confidence that we were actually riding in an accepted manner. (Although more of that below) 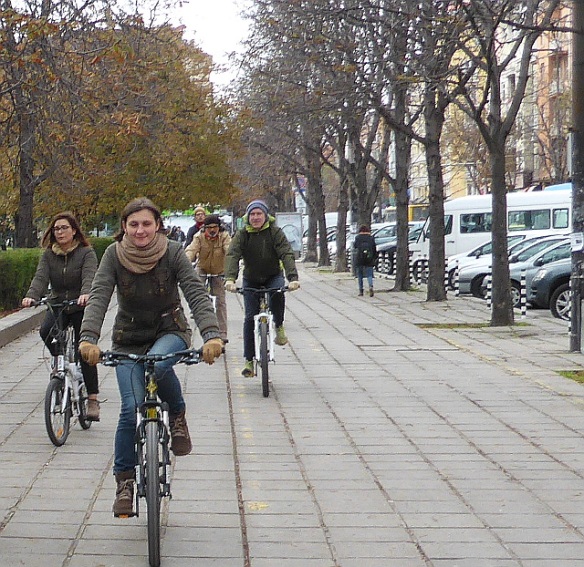 Throughout the trip I noticed that the city had the parking plague, every street, spare corner and open space seemed to be covered with parked cars and they were often double parked, pushing us out into the traffic. In that it reminded me of Kiev, Ukraine, because there was potentially a lot of space for cycling facilities but no space to install them without taking on the parking menace. 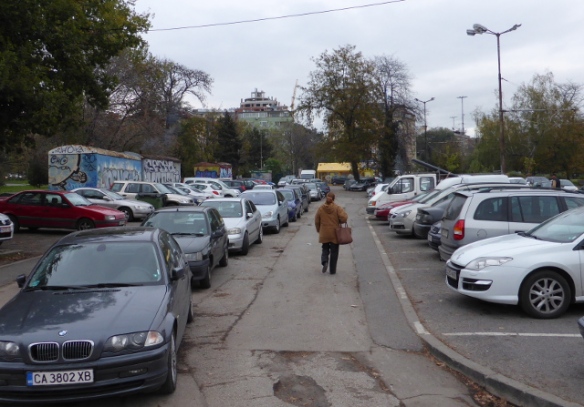 Nice cobbled streets around the National Theatre offered the possibility of an attractive slow moving network of cycle friendly streets like I had seen in Madrid in September, but the parking was still intrusive and not well controlled. The road surfaces were pretty awful too but after three years of Belgium I hardly take that into account any more, I rather regard it as a form of traffic calming. 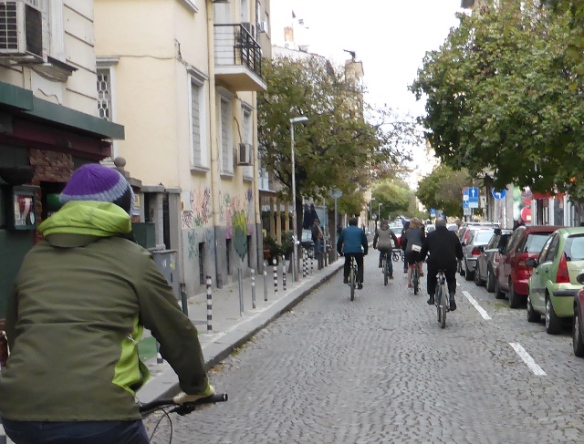 Towards the end of our tour we turned back towards our hotel along Vitosha Boulevard, the main shopping street of the city that gets its name from the dramatic snow covered Vitosha Mountain that is visible on the skyline right along the street. 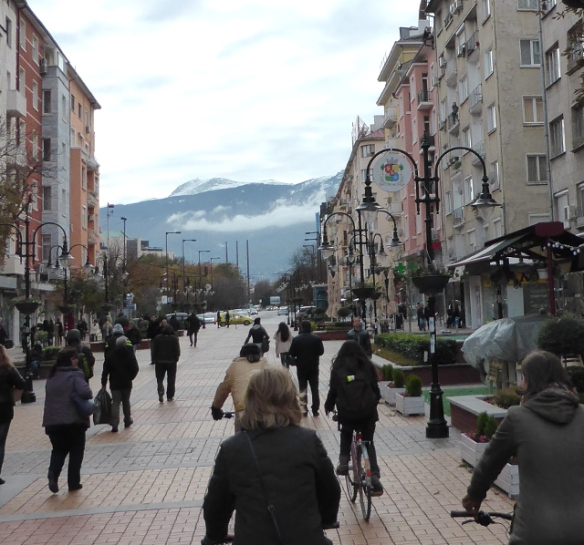 By the time we did so I was in a thoroughly good mood from the cycling and beginning to quiz my colleagues about what I had seen and felt on the ride. Because I certainly wasn’t getting the impression that this was a frightening, anti-cycling city. That impression was reinforced the next day when some of us walked around other areas.

Most importantly of all I felt that the drivers of Sofia were some of the most patient and well behaved I have come across. Seriously! It seemed common to just to wander out into the street and face down the cars which proves to me that is far from a car dominated city centre. At no point was our large group honked at and passing distances were well respected. Whenever a pedestrian or another cyclist just wandered out into the carriageway or attempted a pedestrian crossing the motorists stopped almost instantly so we started doing it too. 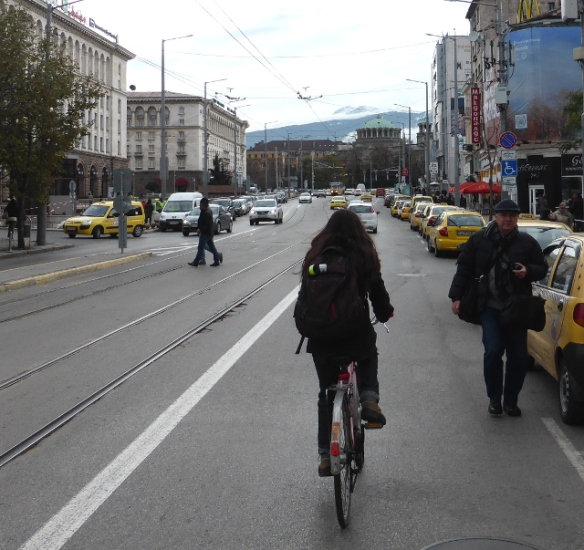 Turning at junctions the traffic didn’t race off, people were able to cross and in the small streets traffic speed was very sensible, especially in the numerous 30kmph speed limit zones.

The other thing that struck me was that the numbers of pedestrians and cars was incredibly quiet for the centre of a large European capital on a weekday. I kept thinking I must be missing something such as a public holiday, but apparently not. There were definitely traffic jams out on the peripheral roads and arterial corridors but it really was quiet and sedate to get around by bike in the city centre. I wonder if it is the traffic management that makes everybody so patient, the waits at traffic lights were never ending? However in most cities where cars queue at traffic lights it seems to make them impatient and grumpy, here I just didn’t get that impression. It may be that we were the beneficiaries of a significant police presence, especially at larger junctions where they still have these brilliant little control boxes that sit up above the street corner and manually intervene to control the traffic flows. How old school is that – brilliant! 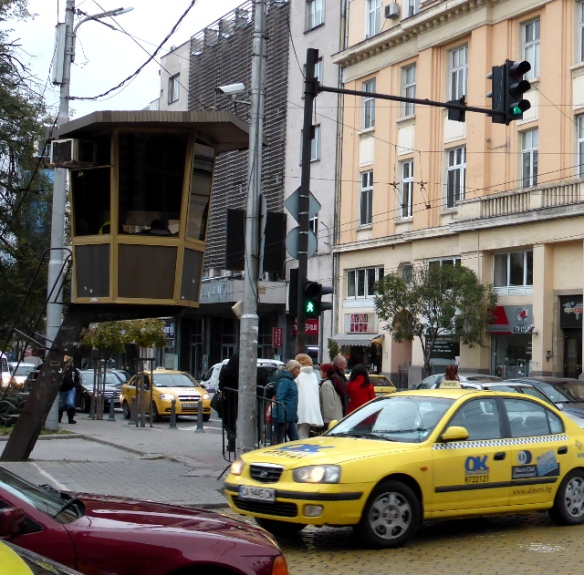 When we walked a bit beyond the city centre we came to some of the many parks that run around central Sofia. 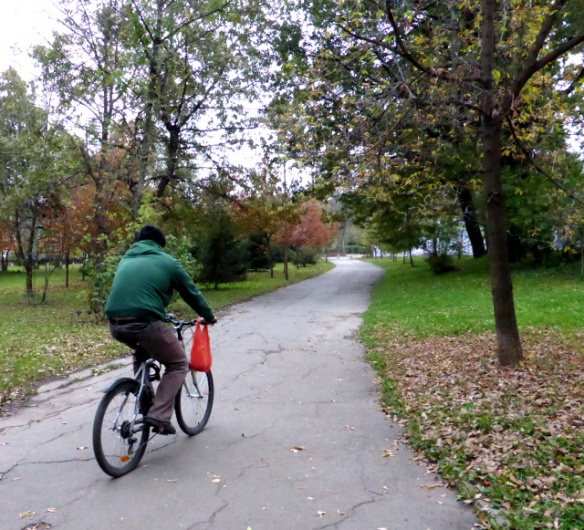 Here there were networks of quiet car free paths and alongside the canalized Perlovska river there were long cycle lanes looping around the south of the city centre. They too were not in wonderful condition, but they were there, and being used. 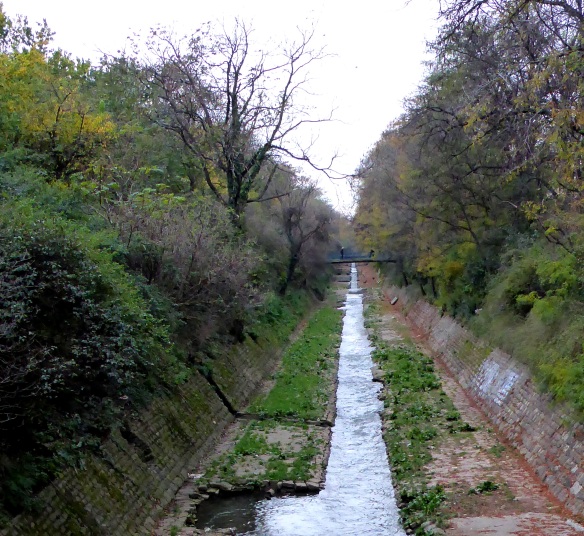 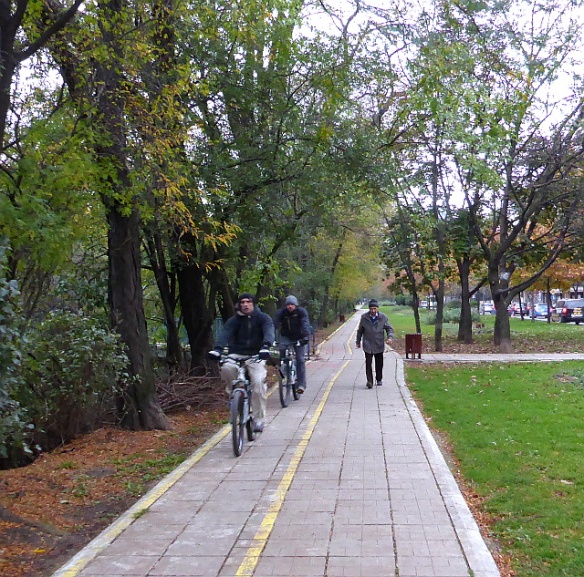 The last discovery of the trip turned out to be just near our hotel where we found a large, wide cycling and walking bridge linking the National Cultural Centre to the southern suburbs, allowing people to cross a really nasty main road into the city centre from their residential areas. 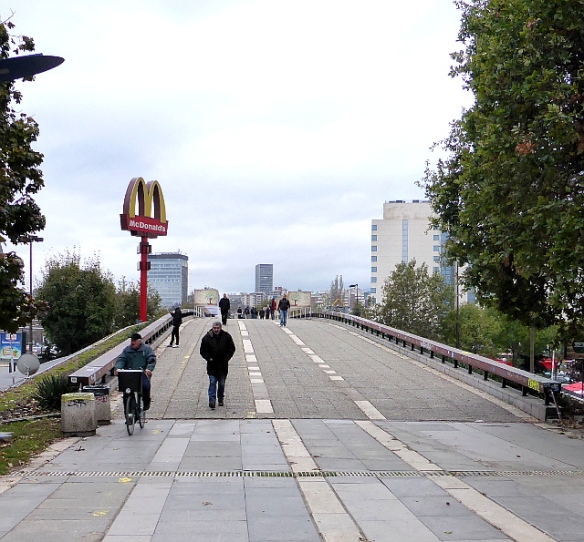 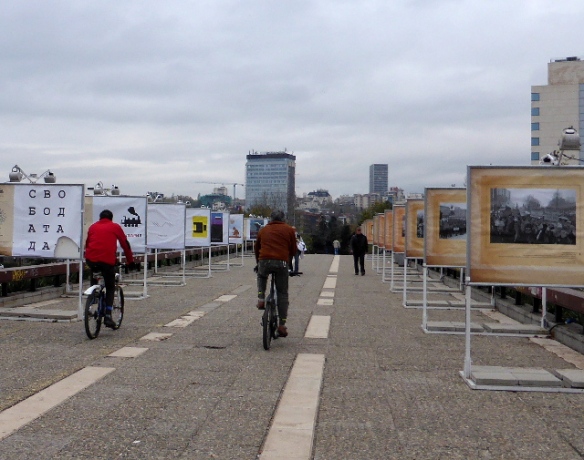 This is the kind of infrastructure we desperately need to fill missing links in our networks in so many cities and here was a perfect example in a place that is supposedly really bad at infrastructure. How confusing.

It was a bit spoiled by the nasty collapsed drain cover on the down slope but most of the locals seemed to know it was there, the BMX riders jumped it and the oldsters went round. 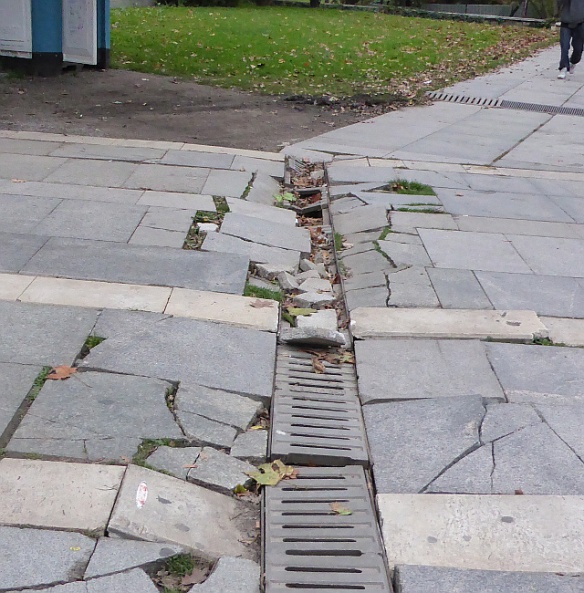 Because there were cyclists. Not in huge numbers but almost everywhere we went in the city there were just ones and twos pottering about on the streets and pavements. No it wasn’t a lot and I could see that they probably didn’t add up to more than the 1% mode share claimed in the published statistics. But they were there and it wasn’t just the cool dudes. We saw older people, mothers with children on child seats and younger women which also suggests that the environment was not totally hostile to all but the fearless.

What surprised some colleagues more was the bikes. They were 90% cheap mountain bikes, only occasionally did we see a more equipped city bike. Again those of us from low cycling countries were less surprised, a population that doesn’t cycle much and therefore doesn’t understand the need to pay more for mudguards, a rack and some city tyres is just what we experience all the time. We did conclude that fat tyres and suspension was probably a good idea when a lot of Sofia cycling seemed to involve bouncing up and down kerbs but we know that you have to build up the population’s knowledge quite a bit more before the better equipped bikes become more common. 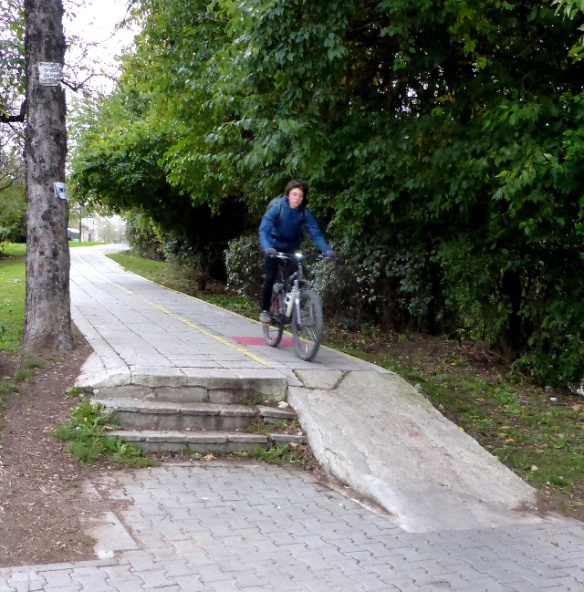 So I leave Bulgaria slightly puzzled by my cycling experiences in Sofia. In many ways this was like my experience of Berlin with its wide streets, quiet traffic and well enforced traffic laws. And in that context cycling could and should flourish because the traffic jams on the arterial roads were bad and there is only a two line metro service to fall back on.

I guess cycling really hasn’t set down new cultural roots in the city and it is going to take a slow steady campaign of promotion and a lot more commitment to cycling infrastructure before it takes off, if only to help people know where and how to ride. 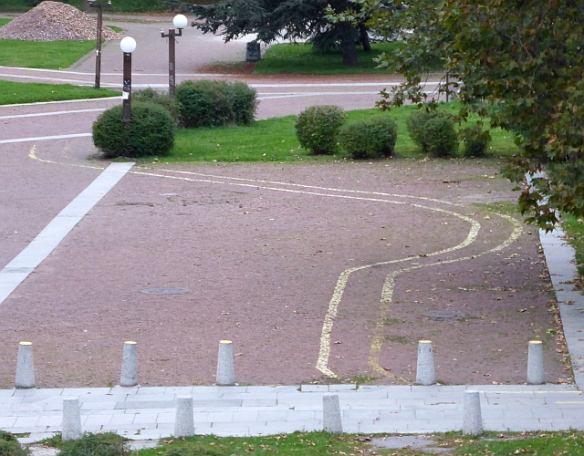 Probably I got an artificial impression in the centre because the traffic did look more aggressive further out. But there was a huge maze of minor streets around the suburban apartment blocks which could be bike friendly. Of course what usually fails in those circumstances is crossing the big roads and I may be wildly over optimistic from what I saw, any bike route is only as good as its most challenging junction because that is the one people won’t cross. But I couldn’t help but feel the city centre is a good destination for cycling, there must be something to build on there and I would certainly ride there on my own on a return visit.

Now we will do what we can to help our passionate friends at the Bulgarian Cycling Association and their allies to take advantage of what they have because it will be a long road to build up a cycling culture from such low numbers. 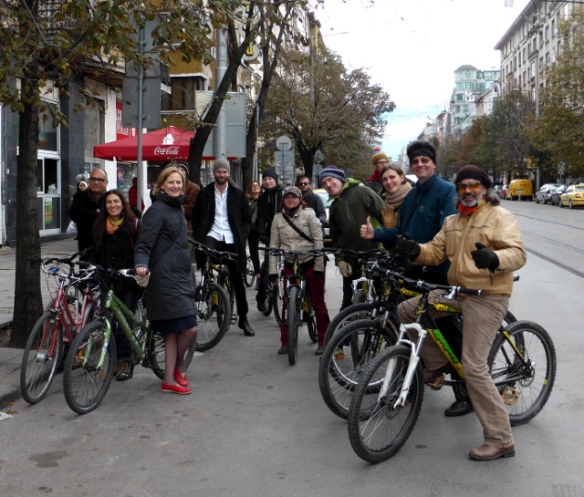 But it is possible that their underlying conditions are a lot more tolerant than in many other countries.

I do not despair.

1 thought on “Cycling in Sofia, Bulgaria – positive observations from a short visit”