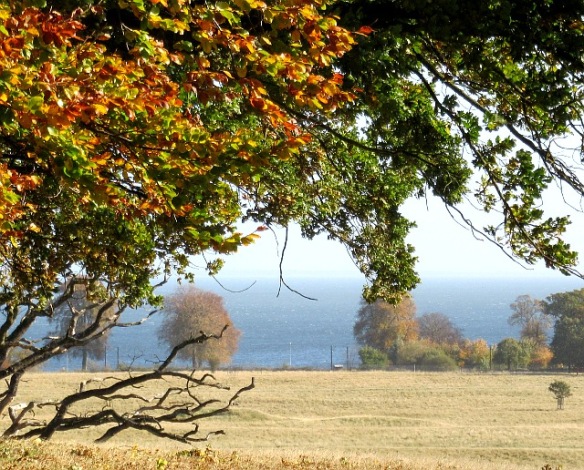 As a cyclist it is so easy to be blown away by the waves of Copenhageners cycling to work and school along their wonderful bike lanes and forget to take a look at the city and its region.

I haven’t done that since Velo-city in 2010 so after a trip in October I decided to add an extra day of holiday and treat myself to a cycle touring day, especially as I also wanted to try out the Bycyklen city e-bike hire.

To say I struck lucky would be an understatement. The weather treated me to a fierce bright sunshine that lit up the buildings and turned the sea a shining blue. And my destination was an absolute picture. If it had been wet and windy I might have compromised with galleries or castles but high on the Tripadvisor listing for Copenhagen region was the former royal hunting park along the coast to the north of the city which looked like an excellent target for the day. The combination of bright light, autumn trees and avenues of the Dyrehave (deer park) produced a delightful place to ride a bike on a day off.

The fact that most of the ride also took place on great cycle paths as well as the paths of the park just made it wonderfully easy, but I it is a ride I could have enjoyed anywhere. 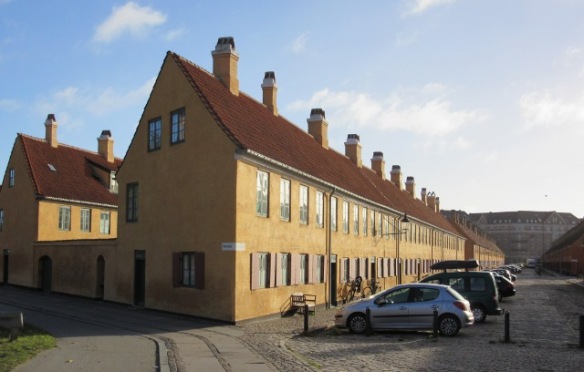 From my starting point at Nørreport Station I headed northwest towards the coast, already enjoying the fact that the old buildings were picked out by the light before I got my first sense of the sea at the Amerikakaj (American quay I assume?)

Progress was very slow from that point onwards, I was constantly stopping and diverting from the direct road north to follow the coast where I could see the harbours and beaches and take in the colours. 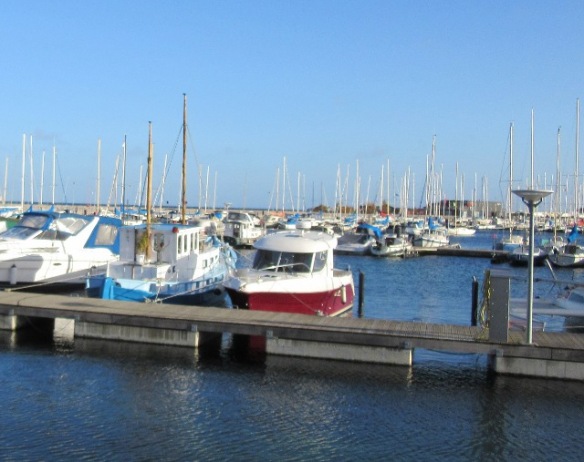 That is very indirect because this is a working, living coast close to the capital city. The first part around the North Harbour is a bit industrial and at Hellerup my seaside route was disrupted by an affluent suburb composed of homes for the wealthy and connected that had claimed the land closest to the sea front, leaving us plebs with just glimpses. Judging by the flags and brass plaques it is a very popular for ambassadors to have their official houses out here, one of the perks of the job I guess.

When I cleared the houses prominent in the distance was a headland with its own distinct village which turned out to be Taarbæk Havn, a former fishing village that is now an attractive outer suburb of Copenhagen. 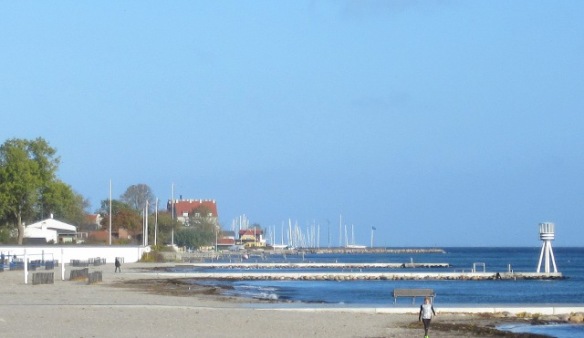 As I approached it I realised that it was tucked on the coast alongside my destination, the Dyrhave where the park came almost to the sea.

Just before the village was a lovely open green with a small thatched cottage which formed the perfect backstop for a break and a gaze out to sea. Apparently the Yellow Cottage (Den Gule Cottage) is a nice tea room too.

After a wander around the village and soaking up a last look out to sea I moved into the Jægersborg Dyrehave (to give it its correct name) for another dimension to my ride.

Passing through the Taarbæk gate I was transported to a world of majestic gold and orange trees and the skeletal forms of ancient trees bleached white where they fell. I read later that unlike many similar landscapes the park management does not clear fallen trees believing in the preserving the natural form as much as possible. This definitely has an impact on the landscape, and lots of fun because even this big kid was tempted to climb up on a couple of tree trunks to get better views. 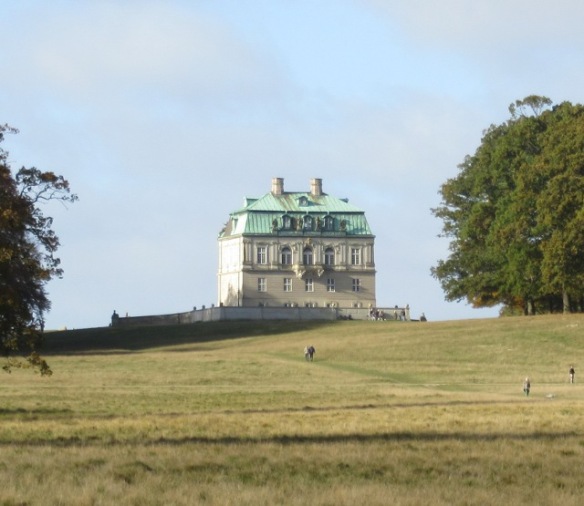 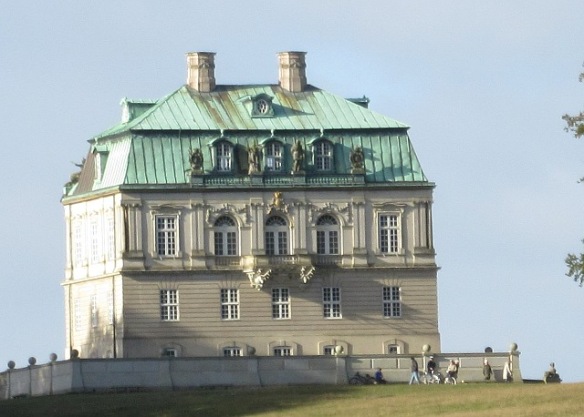 From the top I also got my first view of the park’s official inhabitants with two large herds of fallow deer gathered on the grassland below. I used the park roads to get close enough for a few photos but it was very clear that this was not the time to be too adventurous because there were some beasts with mighty impressive antlers getting extremely agitated. No obvious fighting, but the October rutting season must be approaching.

I must have spent an hour or more in the park pottering around the tracks and roads before I reluctantly set off back to the city to return the bike and head for home. Initially that meant working my way south through some relatively anonymous suburbs and boring bigger roads but I realised that I still had capacity for some more touring so I changed the bike for a fresh battery (of which more below) and decided to head across to the waterside for one last look.

Kastellet was my last destination, the 17th century fortress that guards the entrance to Copenhagen’s harbour. The site is a star shaped structure of steep grassy ramparts and moat with military buildings in the centre. As this is Copenhagen it is of course possible to ride right into the heart of the complex and even ride around the ramparts, none of your stupid “no bikes” rules here.

It provided me with my last taste of sun, sea and gold en trees before I headed back to Nørreport to collect my luggage and head for home, thoroughly refreshed by my cycle touring day in Copenhagen. 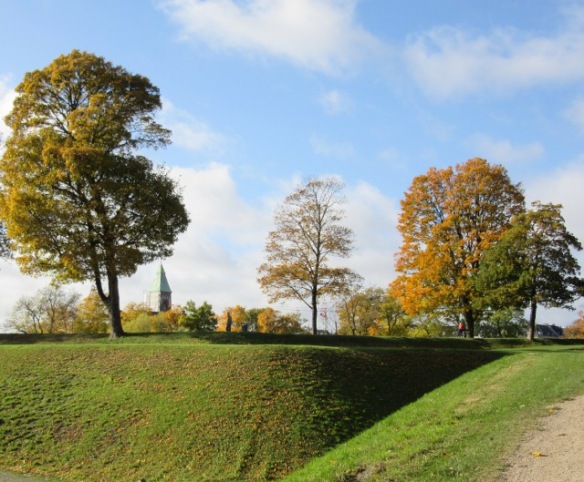 Bycyklen is the name of the relatively new bike share scheme in Copenhagen which replaced a very early generation system.

It has been heavily criticised by some local commentators for apparently being over-specified, over-priced and late in its delivery. However as I am working a lot on future cycling technologies I wanted to see more of this 100% e-bike system with its tablet control and mapping system built into the handlebars and I went into my test rides with an open mind, especially as many of the teething problems should have been overcome and the system is expanding.

A city tour with some ECF colleagues on the day before my touring ride went extremely well, as ever it is fun to have a little e-bike boost when pedalling and the screen is a nice “toy” for tech geeks.

All city bike share bikes are great for urban touring if you are unconcerned about speed or style, they are big sturdy lumps of steel designed for use and abuse and I celebrate that, I have used them all over the world.

Overall I felt the system stood up to its peers well enough and these e-bikes do level the playing field a bit and make it much easier to go a bit further and faster than on a standard bike share bike. The navigation is a real breakthrough for tourists and I really appreciated that I could key in a request for the nearest free docking station because I get really, really fed up in other cities when I am going from station to station looking for a parking place. 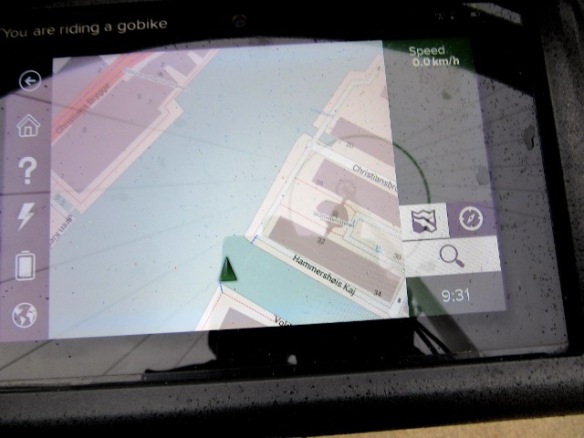 I have written before that the cyclists of Copenhagen are by far the fastest cycle commuters I have ever come across and I cannot quite work out whether the e-bike aid is a help or hindrance in this environment. The hire machines are limited to 22km per hour which is only a limit for normal people when you are bowling along on a flat road with the wind behind.  However here many locals are flying past without technical assistance while maintaining their effortless Scandi-cool. So no wonder they complain if the new bikes are too slow for them. Not for me!

Which brings me to the “niggles” I exposed by taking the bike outside its normal range that I hope the scheme managers can iron out.

Unfortunately I experienced how heavy these bikes can be without the e-boost. While I was out in the park the “low battery” warning suddenly flashed up, telling me I had about 2km of aid left. Consulting the tablet told me that I was 7km from the nearest replacement because I ridden far out of the coverage of bike stations. At least I was able to use the tablet to programme the most direct route back to a docking station but even on the lowest battery setting I had to ride about 3-4km without power which made me very happy that Copenhagen is quite flat.

I had tried to monitor the battery while riding because I guessed I was pushing the limits of the system but unfortunately the monitor didn’t seem to display on screen, perhaps that is a niggle the providers can iron out.

They also assured us on our test ride that the mapping had been worked on to make sure that the routing system didn’t do anything daft like send riders off down the motorways, again I suspect that I had pushed the system beyond its limits because out here it tried to send me down a slip road onto a major road that looked distinctly wrong. Fortunately this is Copenhagen so there were always other cyclists to follow and some well-marked routes to follow so I managed to continue in the same direction without danger, but I was surprised.

The verdict? I am going to give them the benefit of the doubt now, the easy availability of the bikes gave me a great day out and for that I am always grateful. I would recommend the Bycyklen if only for the easy navigation, that is a great feature. On another occasion I would love to programme in a guided tour and let the bikes take me somewhere else interesting.

I am a huge believer in bike share and I am an addicted user, I believe every city should have free bikes on every corner, so I will concede that I am biased. Copenhagen is a tough market to crack because there are so many cycling locals who are prepared to bike long distances so the domestic demand is possibly going to be lower than other cities. But now they have to prove themselves and the niggles I experienced have to be ironed out quickly to give tourists like me confidence or the scheme will not establish a good reputation after its teething problems. In the 21st Century it isn’t just the bikes that are connected, so are the people.

1 thought on “It’s not just about the bike lanes. A beautiful cycle touring day in Copenhagen.”