I am on a three-city expedition across Eastern Europe this week, spending two days each in Sofia and then the Ukrainian cities of Kiev and Kharkiv. Bulgaria seems to have become quite familiar in the last year as this is my fourth trip but I haven’t been to Ukraine since October 2012. It is astonishing to think how much has happened since then, I was writing about the sleepy calm of Crimea in my first blog post from that trip.

There isn’t going to be much time to get out for sightseeing and cycling around because the time in each city is densely packed with meetings and talks, but that shouldn’t daunt a blogger!

Walking briefly around central Sofia I sensed that I am voyaging across the seasons. Sunday in Belgium before I left was definitely an Indian Summer, with a lovely sunny 20 degrees so I was out in the garden in tee-shirt and shorts. Some of our trees have just begun to yellow but I have a real sense that autumn is delayed, sometime soon there is going to be a sharp turn and the trees will provide our golden carpet. However it is clearly autumn in Sofia, and by the look of the forecast it will be close to zero in Kharkiv, at least at nights so I suspect I will be closer to winter in just four days’ time.

In Sofia there is a soft and sombre tone to the light, coats are on and the trees are blending with the yellow and cream paintwork of the buildings. 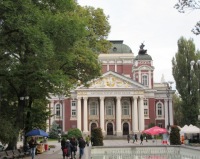 No snow on the mountain yet, but it was grey and shrouded in mist in the evening. 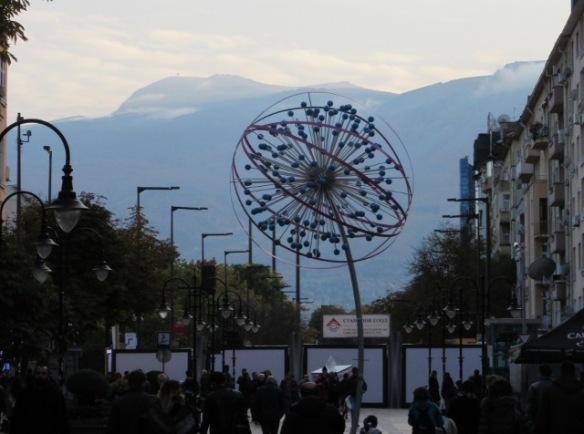 The tree lined squares are already piled with dry crackling carpets of gold and brown which soften the hard landscaping.

I walked just before sunset and as I approached I could just see the domes of the Alexander Nevski Cathedral catching the dying light, giving them a late golden glow which matched the season.

The few cyclists that were around were also dressed for the weather, definitely gloves and hats were in order.

A new discovery on this walk was the extensive open air book market on the streets near the City Library. It had a lovely calm atmosphere, almost as if the library had stretched out onto the pavements. I suspect if I lived here (and could ever master Cyrillic text) this would be a favourite destination. 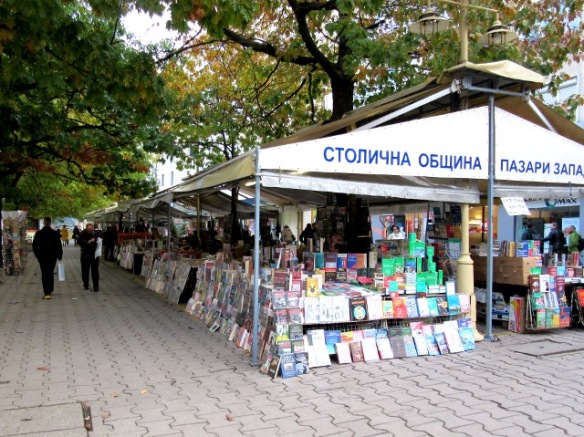 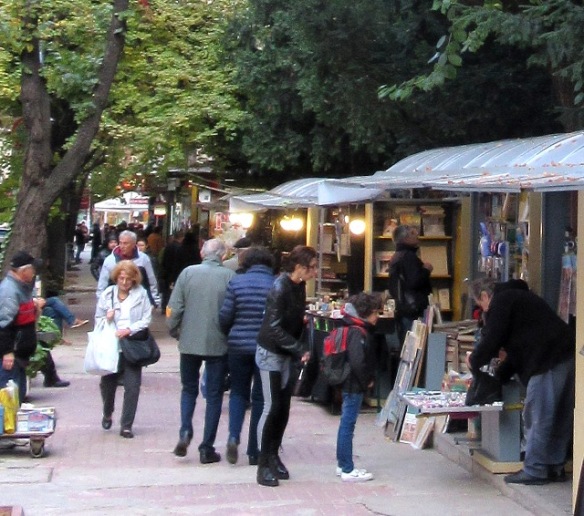 I could join these two old boys on their bench and read my latest bargain, maybe all year round, but definitely at this time of year. I will grow a big mustache to keep warm.