I recently made a flying visit to Lisbon, capital of Portugal. It was what is called a “technical visit”, where I went for two days to work with some walking experts to advise the city about some local projects.

That means a “quick in – quick out” scenario where I was supposed to be very business-like, and thanks to other pressures I couldn’t sneak in any personal time for my first time in the city. But by walking between meetings across the old city, and through my early rising habit I was able to capture a small gallery of one day in Lisbon, from sunrise to sunset.

I have to say it was well worth it. I had heard from various sources that Lisbon makes a rather special city break and I have to agree, now I would love to go back for a long weekend with my wife.

I got in around midnight on Monday evening, but the strange bed and street noises woke me early as usual. So I poked my head out of the hotel window and got a first proper glimpse of the steep sloping streets that make up the old town. 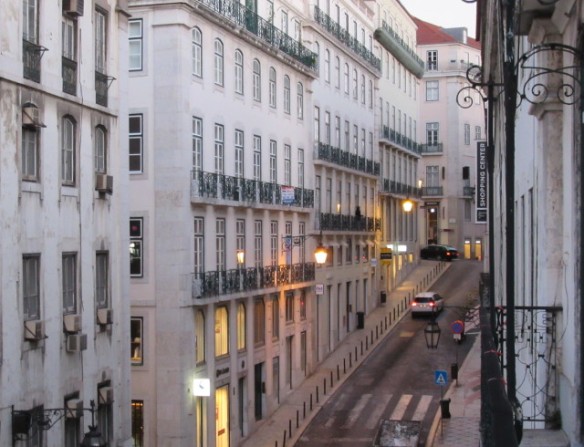 No sleeping any more, I was off out the door and five minutes later I was taking in the huge plaza in front of the River Tagus that makes up the city’s ceremonial entrance from the river, everything lit in a soft pinkish glow. 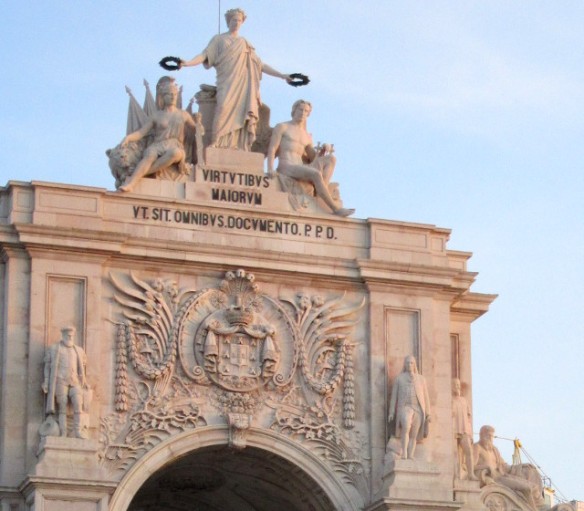 It was probably too early for many people, but I did spot one lonely cyclist making his way along the riverside cycle path – so I could say “I do not despair for the future of Lisbon” almost immediately!

Other priorities then intruded – the inevitable breakfast of coffee and pastries in a small café, the smells had been driving me crazy.

To get to my meeting at the municipal offices for transport I was determined not to waste my time buried in the metro, so I plotted a straight-line course right across the old city district from my hotel. Well I say straight. 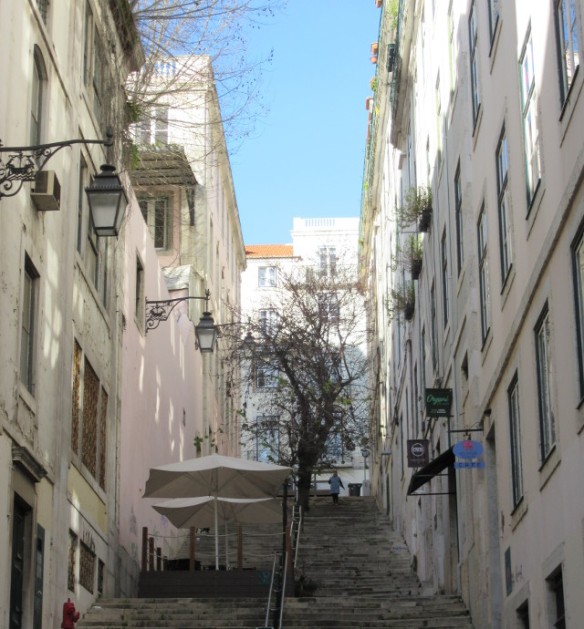 Nothing in Lisbon’s Bairro Alto is straight, and neither is it flat. My route was a zig zag of cobbled streets and steps that pushed steeply upwards until I emerged in an area of squares and open views across the city, already heating rapidly in sharp sunshine.

And great views too. Some back to the river, but others showing the seven hills and layers of the city that just seem to have buildings roads and walkways piled on top of each other like a sort of layer cake. 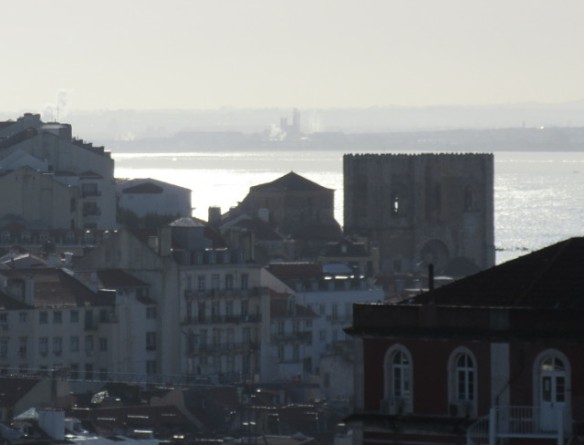 Up here almost no bikes – and that’s not at all surprising – even the trams have a unique tilt to get about. 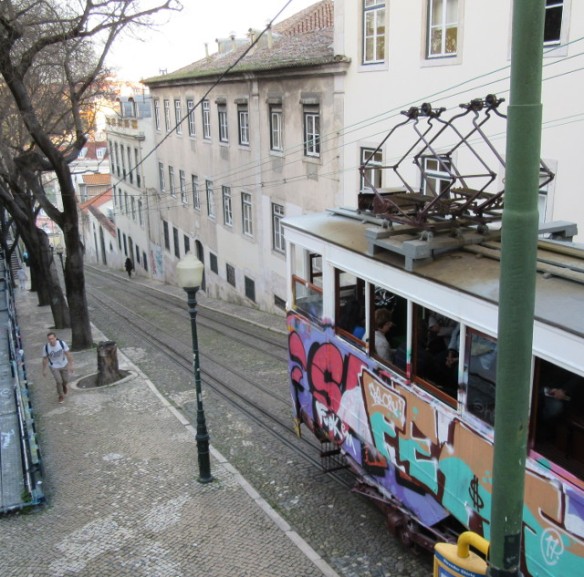 Late afternoon after an intense day of debating cycling and walking I had time to retrace my steps by a similar route up and over the high point and a bit more time to dwell for photos. The temperature had soared (24 degrees apparently) and as work finished the streets and parks were bustling with life. 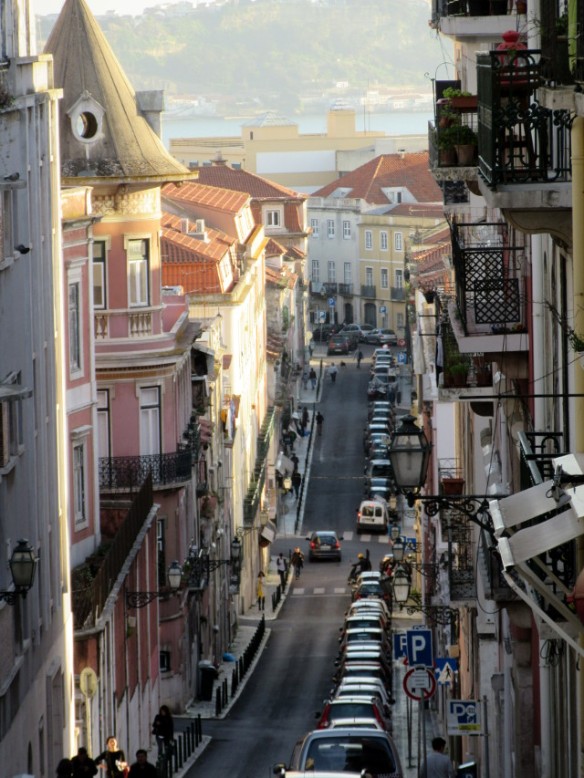 The change in sun direction also highlighted views and angles I hadn’t seen in the morning – I could have stood around for ages and soaked it up like the card players in the square. 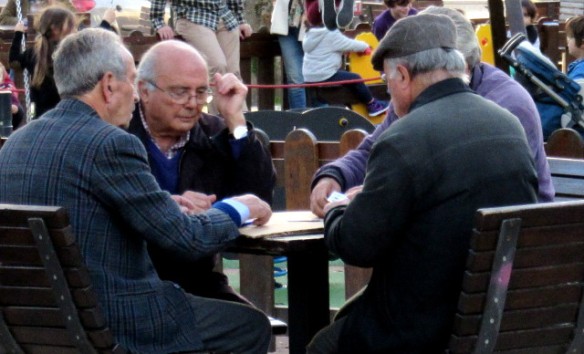 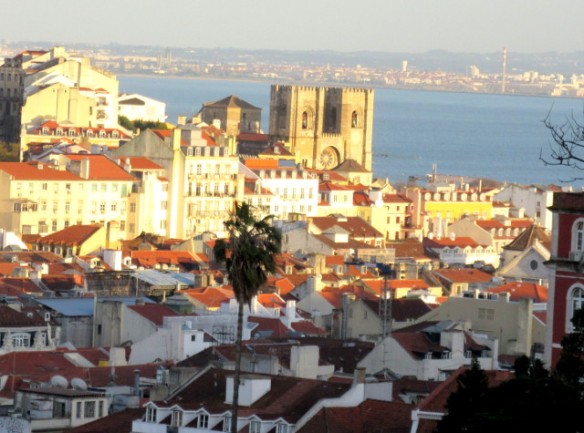 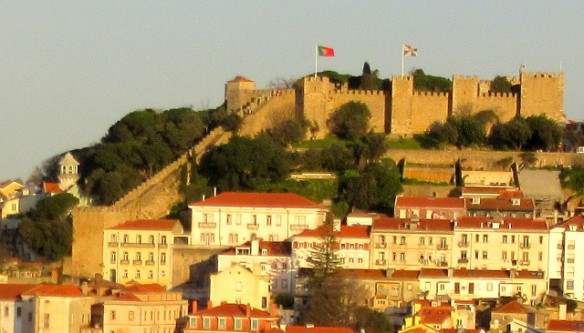 But I had an appointment with sunset.

My hosts had booked us into a restaurant on another hill, recommending the view from just below the castle. After a quick shower I was off up there rapidly to catch the fading light across the city skyline.

I was just soaking it up when I realised I had an exceptional treat. As the sky darkened the planet Venus appeared as the Evening Star, a bright spot against the dark. 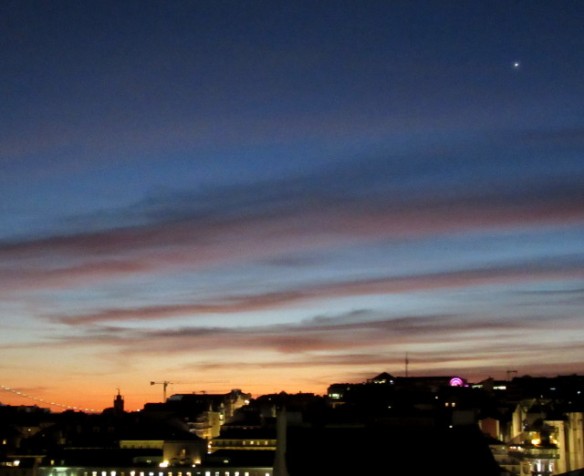 Maybe not the easiest shot for my little camera, but take my word for it, this was the place to be. Maybe it’s those days of astronomy studies back at university, but the sight of any of the planets still gives me a thrill.

After a delicious and sociable meal a snapshot of the atmospheric old streets and the floodlight buildings around the castle. 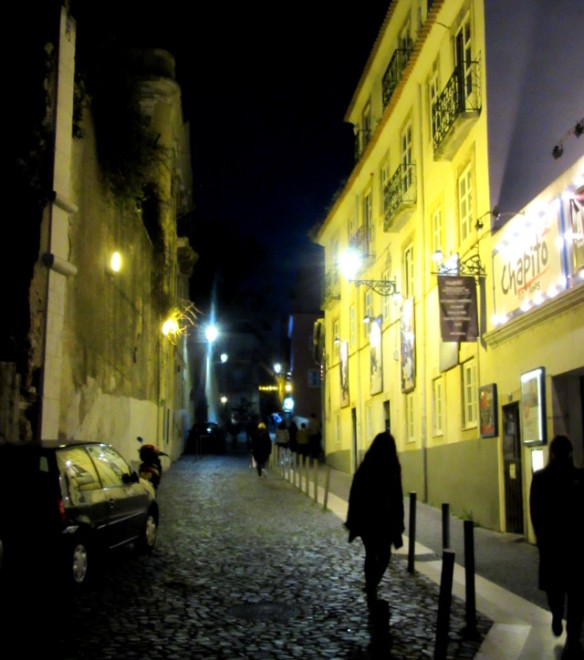 A snapshot of Lisbon in a day – what a gift! Many thanks to the Accessibility Team at the City of Lisbon, great hosts,  allowing just enough time to find about the centre of Lisbon, at least as a walking city. I’ll be back.

4 thoughts on “Sunrise to sunset in Lisbon – a gallery”