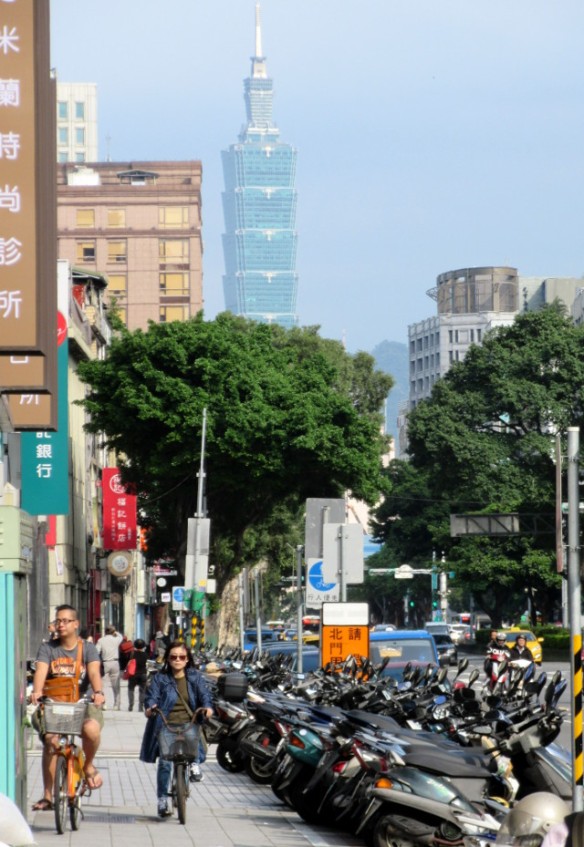 This is just a short thought piece about my experiences and observations of institutionalised pavement (sidewalk) cycling in Taipei.

Because I was staying in a different part of the city on this year’s trip to the Taipei Cycle Show and maybe because I was forced to be a bit more static than usual I seem to have spent quite a bit of time just observing and photographing the cyclists in a city centre area where almost all cycling was on pedestrian facilities. They were either on the pavement, or using pedestrian crossings to get across major roads. My only bike ride of the trip meant I had to ride into the area too, an experience I did not enjoy when I was forced onto the pavements as well.

As a cycling advocate pavement cycling is a subject that tends haunts you, there hardly seems to be a campaigning situation when someone won’t mutter something about “damned cyclists, terrorising pedestrians” and I have spent far too much time in the media trying to address issues like dangerous driving only to be told that cyclists are a menace. And broadly speaking so called “shared-space” is a subject many people detest, because despite the best intentions and even the best designs it seems almost impossible to get a space where everyone is happy with the interactions, so we as a community spend a lot of time being defensive.

However in most circumstances where I have debated pavement cycling it is incidental to the majority of cycling which is happening on the roads or it reflects attempts to put bike lanes onto the pavement, with very mixed results. What is different about Taipei is that the pavement is in many cases the recommended place to ride by the authorities and the vast majority of cyclists I saw in the city centre were using them, despite the fact that Taipei pavements are already awfully crowded places and in my eyes offer a dreadful riding experience. 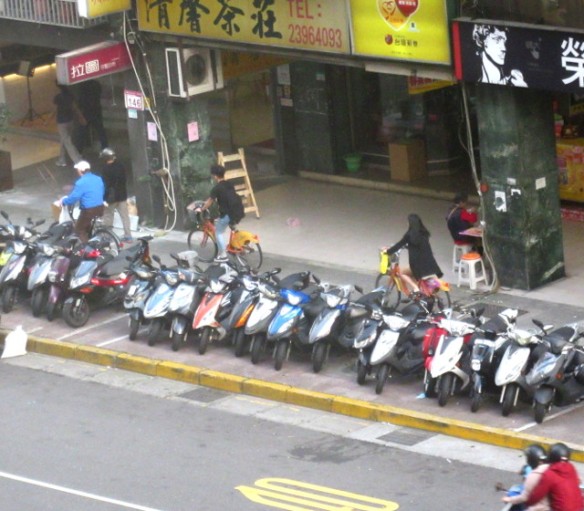 There are wide sections and even pavement bike lanes in more modern sections of the city with wide pedestrian areas, but in the older city core it is very different. At any moment you can be dealing with a space only the width of your handlebars, weaving between pedestrians, parked scooters, shop porticos, deliveries, waste for collection, not to mention other cyclists. There are endless transitions between levels because often the shop fronts and the pavement are on different levels and each crossing of a side street requires a bump down and up a curve (few gentle sloped curves for wheelchairs and prams here). 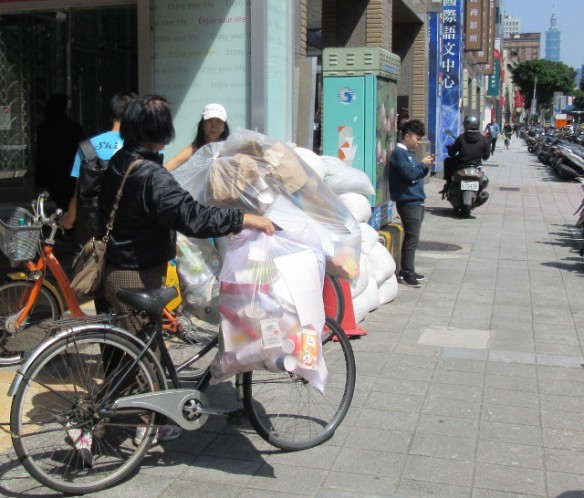 I passed by the National Taipei University on my Monday bike ride just as lessons were ending and that was quite a sight, hundreds of Youbikes were stacked on the pavement and as the students came out they (and I) were just rolling on the pavement at walking pace with all the students leaving on foot, it seemed to take ages to get clear of them.

Despite being away from the cars and the dread scooters to me it is highly stressful and extremely slow progress, turning the simple pleasure of rolling smoothly forward on a bike into an obstacle course and slow bike race combined. 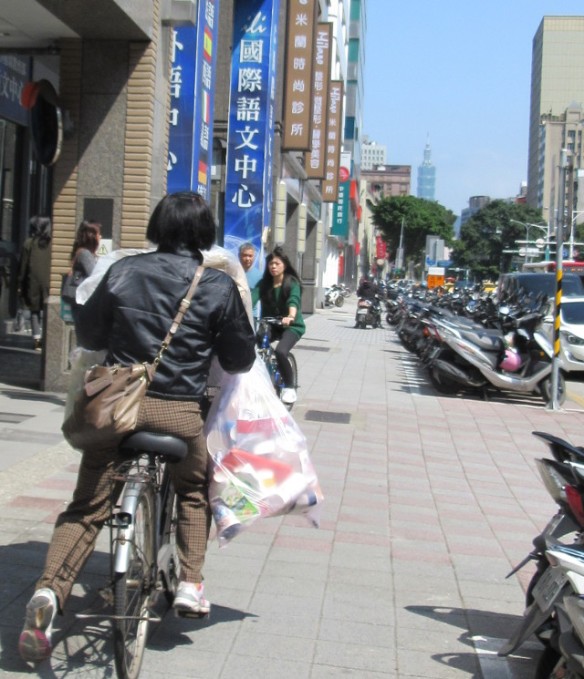 However through observation I realise that my frustrations are not reflected in the riding of the locals. For one thing I noted that the diversity of the riders is much higher than for example in the UK, a far greater percentage are women, elderly people and even children.

And they are very much not sporty or hipsters. Which very much confirms a wider pattern that growing the breadth of cycling demands facilities away from traffic.

And it seems to me that a different demographic and the environment come together in a sort of slo-mo cycling. The cyclists reach a state of grace, an uncanny smooth slow motion that seems to glide imperceptibly through the obstacles without quite stopping, even if carrying a mass of recycling, a child or other weighty object. The Dutch have often used the term “wheeled pedestrians” to describe the fact that a Dutch person will do anything on a bike that they can do walking, but there is something completely different about the drifting past the obstacles in Taipei, one could almost imagine their breathing and heart rates dropping into a meditative state.

It kind of works, in a low key way. However, it doesn’t work for me and it is no way forward when cycling levels grow.

As I say on every trip the Taipei riverside leisure routes are a wonder, but I cannot enter the relaxed state of those city centre riders trapped in their narrow cages, I am unable to experience cycling in those conditions as a quality mode of transport. Can I feel cycling is way of progress if I cannot fly, even for a few minutes?

I hope all those Taipei cyclists one day get to ride free. Because that is how cycling should feel. This June’s Velo-city 2017 in the Netherlands is themed the Freedom of Cycling – this should be their promotional video.