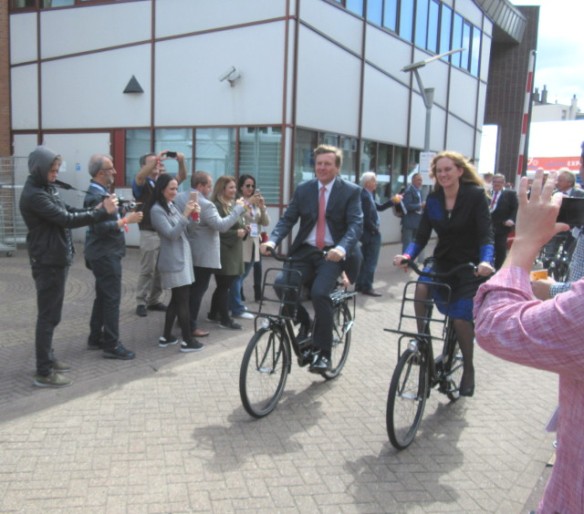 As with previous years I have used the space of a week to reflect on the 2017 Velo-city, the global cycling summit managed by ECF, the association I work for. This isn’t the official report, its just a chance for me to share some blogging thoughts and side comments about what I saw and heard during the week.

Because Velo-city moves from country to county each year there is always a distinctive flavour, but with this one it has always been crystal clear what the story had to be. “Dutchness”. In cycling it is a promise of the most cycle friendly-country in the world* and place where cycling is almost universal. Only 13% of Dutch people never cycle according to surveys, that effectively means everyone who can cycles at least once a year. (*Danish readers may look away now)

However, that also makes it quite hard to write about and even to create a conference agenda, because it must also be the most studied and shared cycling environment around. This is especially true since the web came along and blogging has become a widespread tool, because the Dutch don’t just like to do their cycling, they love to talk about it. Even my humble blog posts about Dutch cycling are some of my most read – and by Dutch people. If you have the slightest interest in the development of cycling you have been exposed to “Dutchness” with some great bloggers and writers in the mix, some of whom I met for the first time.

I do think they achieved something special. Whatever their exposure to Dutch cycling I think even those who have been regular visitors to the Netherlands, and of course the Dutch themselves found something distinctive to take home, and I think that’s because there were added levels, just like a Dutch dyke raised above the waters.

You can read about Dutch infrastructure. You can be told that “everyone cycles”. You can hear about the levels of cycle parking needed to cope with the sheer volumes. You can even see videos of the traffic jams at junctions. But drop 1000 foreign cycling experts into a busy Dutch city and you will see the first timers in the Netherlands just soaking up the environment, even if it is just standing on the roundabout outside the conference centre and absorbing the numbers of cyclists that flow by all day long or seeing the “oceans of bicycles” parked in the city or stations. 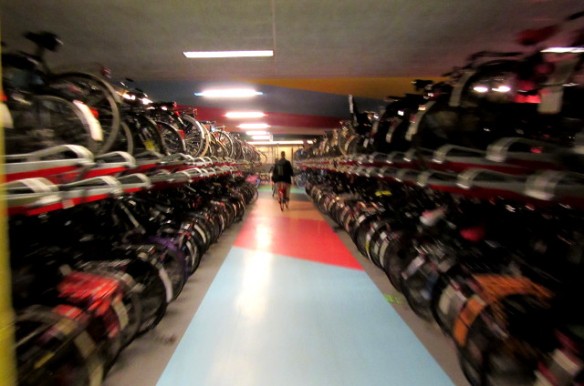 I had some great conversations with officials and advocates from all over the world who just appreciate the chance to “be there” and get inspirations to take away. It may be Level 1, by heck it works.

One better than looking – get out and ride, preferably on an upright Dutch bike so you fit in with the swarms. Riding the streets gives another dimension because it gives you a feeling of how it all works and flows. I still think it is really important that people experience the diversity of cycling in the Netherlands because there are a lot of false perceptions around despite the level of shared knowledge.

The grand parade – with musical accompaniment, chatter and laughter

Or to just take a self-guided spin around the area in the early evening, especially with the great weather we enjoyed all week.

Even sports cyclist find the infrastructure allows them to cruise. 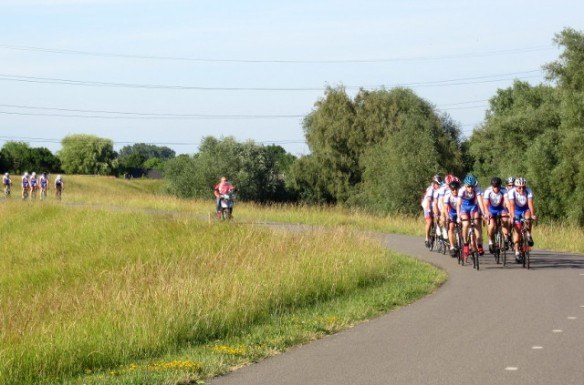 The point I find myself making constantly to people who have not visited the Netherlands is that cycling here isn’t just about bike lanes, there is a high level of cycling with cars on shared streets which make up a vital part if the cycling networks. I heard arguments between Dutch cycling experts about whether cycling streets or 30kmph zones were better or more cost-effective solutions for cycling on residential streets and suburban roads, but in either case the control over cars and the acceptance of “cyclists first” by drivers has to be experienced for anyone from outside to appreciate that it works.

I also was very taken to hear a Danish delegate say “we cannot do that” because the Danish Police have become so comforted by the certainty of cycle paths and pedestrian zones they actually oppose cycling streets on principle. One up for the Dutch I would say, based on the evidence from riding around Nijmegen. 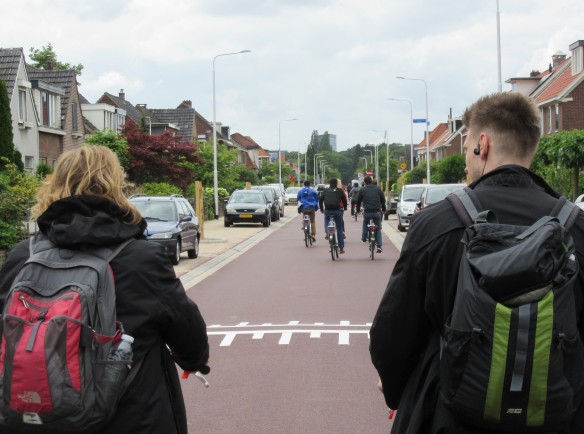 Only by really feeling it can engineers and traffic planners (or Danish policemen) understand what it means to cyclists to have whole streets to ride, it adds huge amounts of safe riding capacity to the cycling network.

It’s a conference, right? So you do lots of listening, mainly to people droning away behind Powerpoint presentations? Well hopefully not at our conference, but what stood out for me at this Velo-city was the level of the Dutch speakers. Not just the quality (which was generally good) but I mean the level of seniority sent by the various national and regional actors. In most countries we could conclude that national infrastructure departments or prestigious universities might be regard cycling as something for the juniors, or a side interest for some sporty person who is regarded as the local bike nut and tolerated for his or her eccentricity by the senior staff. 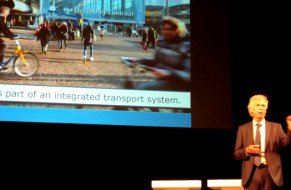 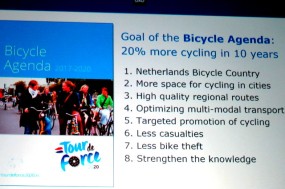 Not in the Netherlands. And when these senior people from the ministry or the railways or the sustainability council speak they speak with the understanding of people who ride a bike, their families ride bikes, their neighbours ride bikes, their staff ride bikes. They get it!

This inevitably leads to wistful comments from all around the world saying “I wish my head of road improvement could be here to hear that”, or my chief engineer, or the head of the national railway company, or……

And that also set a challenge for the international speakers who really did have to step up to perform alongside the main acts. There were a few sessions that maybe didn’t hit the heights, but in general I think this year’s standard was very high.

I could say that I am one of those privileged people who has been over-exposed to cycling so I can already tick the boxes for looking, riding and listening to Dutch cycling expertise and I could thoroughly enjoy being surrounded by a huge number of people going through their own personal moments of inspiration.

For a personal highlight I can pick out one theme of the conference that was an added layer on top of all the “usual suspects”. Thinking – thinking deeply, crossing a line from practical cycling matters into philosophy.

Officially the conference theme was “The Freedom of Cycling” but I just remember it rephrased as the “happiness of cycling”. A group of keynote speakers addressed the relationship between these two great subjects and some of them made my week.

It kicked off with an entertaining opening address by Leo Bormans, described as a global Ambassador of Happiness & Quality of Life, author of a bestseller called “The World Book of Happiness”. Conclusion – the steps to happiness are all contained in a bicycle. Well that’s me hooked!

And later we take a complete mental leap with a speech by the Chief of Climate Change for the Government of Bhutan. Who? What? Why? A high level public official and mountain biker from a remote Himalayan Kingdom that has decided that it will not measure its success by economic output. No, what they will value is Gross National Happiness. They had a traffic light in the capital city, but they took it out because the people didn’t like it.

Listening to Thinley Namgyel talk about his country and cycling was like pouring warm chocolate over the audience, there were smiles all round the room. Closing line “You can’t buy happiness, but you can buy a bicycle”.

And so it continued, until my boss Bernhard Ensink wrapped up the week by saying that Velo-city was the place where we could combine economics with happiness. I’ll take that, I enjoyed the detailed practical sessions again, but I was taken to another level by some of the quality of the thinking.

Can I take a picture of that feeling to end this post? I can try!

There is of course only one way to sum it up in words: “When I see an adult on a bicycle I do not despair for the future of the human race”. There are a lot of adults on bicycles in Arnhem and Nijmegen and there could be many more from Bhutan to Bungay after our week together.