While we were on holiday in the South of France recently I told our host that one of the rides I wanted to do was up a climb called Col d’Eze.

“Why do you want to ride up that one?” she asked. “it’s not the nicest hill, or the highest, there’s quite a lot of traffic, in fact it just climbs up from the centre of Nice – why that one?”

I had to come clean – it was because it is a famous cycle racing climb, used as the final climb in spring’s Paris-Nice stage race since 1969, most often as a time-trial, in fact most often as the decisive stage that wins the race. Its roll of honour includes Eddy Merckx, Raymond Poulidor, Sean Kelly, Miguel Indurain, Bradley Wiggins and most recently Ritchie Porte who have all won the TT and the overall race.

It is one of cycling’s unique qualities that we amateurs and fans can go out and ride the same roads as our stars, where we might never get to play our game in a world-famous stadium. And the hills are the real lure, partly because these are the places races are won and lost, and perhaps because of some primal urge to scale peaks. Inclusion of a hill in a well-known race triggers a micro-tourism industry, as people who live near the UK’s Box Hill in Surrey well know, ever since it was in the 2012 Olympics.

That trend has been exaggerated by the arrival of training apps such as STRAVA. In theory, the publication of so called “segments” was to stimulate athletes to test themselves regularly over the same training section, but for cyclists it created a boom in weekend warriors comparing themselves to the pros, with segments attached to all the major race climbs.

When stopped to chat to two cyclists on the road near Nice one of them able to say instantly that French star Romain Bardet holds the record at 20 minutes, meaning that Bardet is “King of the Mountains” for the Col d’Eze on STRAVA. A check of that list includes a “Who’s Who” of professional climbers, although Richie Porte’s 19 minute winning time trial in the 2015 Paris Nice is probably nearer to the true record for the 9.7km.

Which is a very long-winded way of explaining why I left my cycling companions on the last day of our holiday and sneaked off to an unattractive cross-roads in Nice with signs pointing up to the high hills behind the city. 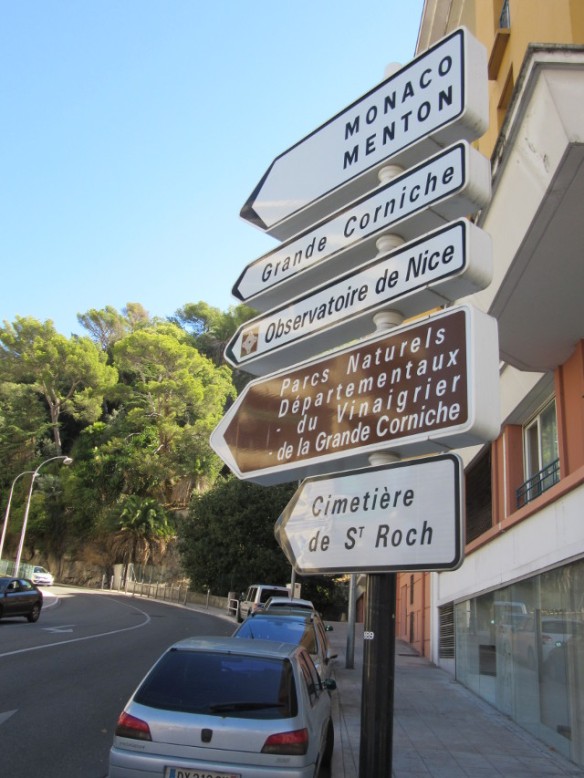 No great ceremony as I pulled away from the traffic lights and tried to bounce my way jauntily up what was basically an urban tunnel, although a pretty steep one, 8% for the first kilometre. 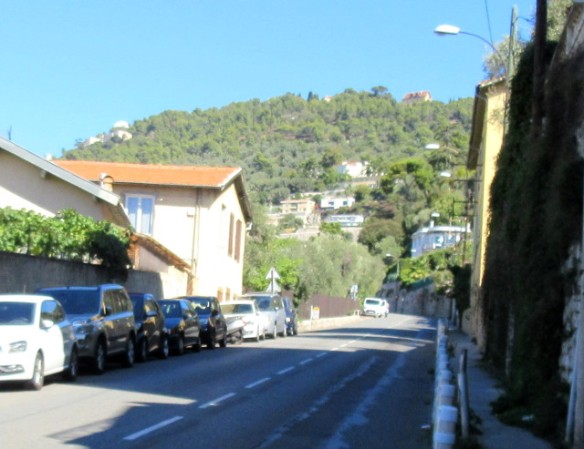 How did I go compared to cycling’s superstars?

My first urban impressions didn’t last long because I was soon enjoying a sweeping view of Nice away to my left and the traffic almost completely dried up. 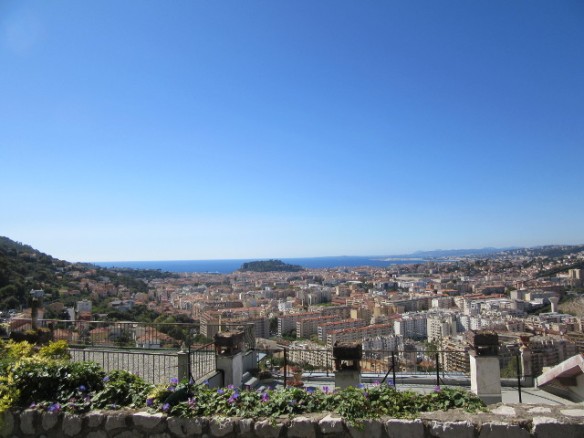 Ok, Roman Bardet and Ritchie Porte and all those STRAVA addicts didn’t slow up regularly to take photos for their blog, they probably have PR agents to do that, but I was starting to enjoy myself.

The houses around the road also petered out quite quickly because it doesn’t offer attractive sea views and there was less exploitation by developers, and the higher slopes above Nice are protected by the presence of an area of parkland called Le Vinaigrier and the land around the Nice Astronomical Observatory. I was soon climbing a much more attractive route than Doretta’s dire warnings of an unpleasant climb in traffic. 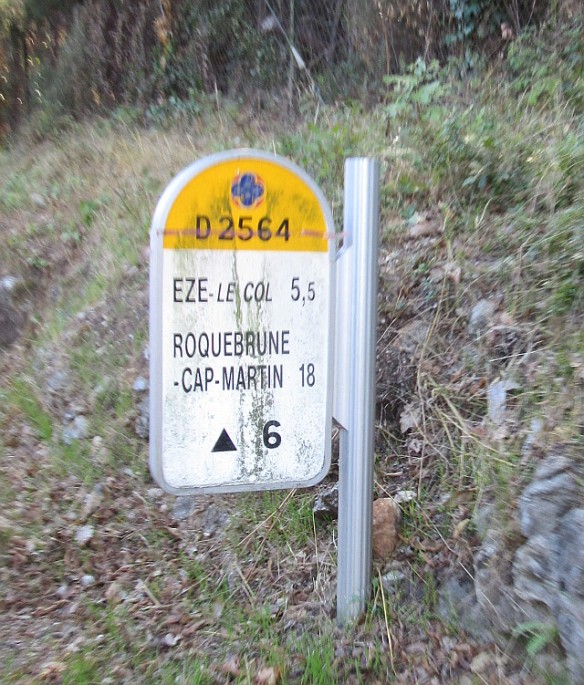 After the first, steeper, four kilometres the road becomes the Grand Corniche, highest of the winding roads that follow the coast towards Monaco and the Italian border. I am sure the professionals would almost think it stops climbing. I, however, had been trying a bit harder than simply touring up my bottom gear because this was the lure of a famous race climb and I felt I wasn’t honouring it properly if I didn’t put in a bit of an effort on the steep start. The result wasn’t exactly impressive, I had actually missed a sneaky bit after the mid-point that increased to 10% for half a kilometre and my legs went to jelly. Then the rest felt steep, even if it wasn’t.

From 6 kilometres onwards I was repeating parts of our previous ride on the Grand Corniche so as I started to suffer I conveniently felt an obligation to take more photos for you because the road and views were beautiful, the sky was blue and the weather hot.

When I got back to the apartment the immediate comments of “you look very red, is that sunburn?” confirmed that I was indeed a pink-faced Englishman on holiday rather than the finely tuned athlete I might have been mimicking for a moment.

My time? Well my GPS only has 8 hours battery life, which mysteriously seems to have run out with loss of all segment records. (That’s my excuse and I’m sticking to it.) It appears the racers could probably have had a three-course lunch in Nice before their ride and they would still have climbed it faster than me. But like all the fans who have been before me I will watch the TV every spring and say “see that bit, I was there.”

4 thoughts on “Why do you want to ride up that hill? The lure of famous cycling hill-climbs”