When I was in Oslo in August I was of course very keen to get a flavour of local cycling, in particular because I had been told that cycling in Norway is quite distinct from the Danish and Swedish cultures … Continue reading →

This is the second of three short blog posts about sculpture. The previous piece and the introduction to is contained in a first post from Bruges in Belgium. The second post really works well as a photo gallery, because words … Continue reading →

I was going to put down some of my thoughts about cycling in the cold weather that hit Europe last week, especially after experiencing Germany at -15C and Brussels-9C.

However I have to take my hat off to this great film put together by David Hembrow which steals the show. It passes every test you can set for a cycling clip “Do I want to be there?” “Do I want to try that?” Oh yes, on every count. If you do you can look at his holidays and study trips here

The man I defer to on all things cold weather is Morten Kerr, President of SLF (Syklistenes Landsforening) the cyclists’ 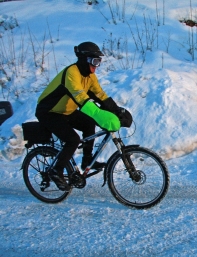 organisation of Norway. He seems to ride his 15km to work whatever the weather, studded tyres and all. Although having spent time in North America he apparently rates Canadian gear as the best, especially his amazing gloves.

I was impressed on my visit to Memmingen in the Lower Allgau region of Germany last week. Memmingen is a few hundred metres above sea level so the combination with the cold weather system across the whole of Europe dropped the temperature at the station to -15C, as far as I know the lowest temperature I have ever experienced. And just like the cycle lanes in the Netherlands shown in

David’s film the cycle routes here were completely clear. I don’t think it was particularly about the cycling, the pavements, roads and station platforms were all immaculately clear. I’m not sure what they use, it doesn’t seem to have the properties of the salt and grit we have on our streets in the UK, but that may be because the temperatures were too low for the wet salty coating that we always get which covers your bike in a corrosive film. What it did mean was that all the cyclists were flying around full tilt without any apparent concern for a hidden ice patch.

I failed the cold weather test miserably. I don’t really cycle on icy roads in

Not everyone in Memmingen got away from the snow!

the UK if I can help it, I love cycling in snow on a mountain bike if I can. My stepfather had a badly broken hip after he went out once too often in February, I really could do without it.

I had planned to spend an evening cycling around Brussels to check out a couple of communes as possible places to live. I’d prepared double gloves, socks, hat etc but I failed miserably after 40 minutes when it was my hands that couldn’t take any more and I shot back to the hotel for dinner.

However after the clothing failure I was put firmly in my place when I dared roll out the Danish expression “No such thing as bad weather, only bad clothing” which has become such a feature of every presentation on cycling in Denmark. “I hate that expression” said my Danish colleague to the amazement of our lunch group. “I’m Danish, and I like to be warm”.

The following day I was keeping a careful eye out the window around lunchtime when the snow started to fall. By the time I set off for the Eurostar there was a slushy mess on the streets of Brussels. I’d like to say I shot off confidently taking cobbles, traffic and pavement cyclepaths in my stride. What I actually did was fold the bike and walk to the Metro. I am sure I have let the side down somehow, but something tells me that I was not going to enjoy the small wheel experience in those conditions.

So hats off to the cold weather cyclists, a pair of proper Nordic gloves needed for me to join you next year.