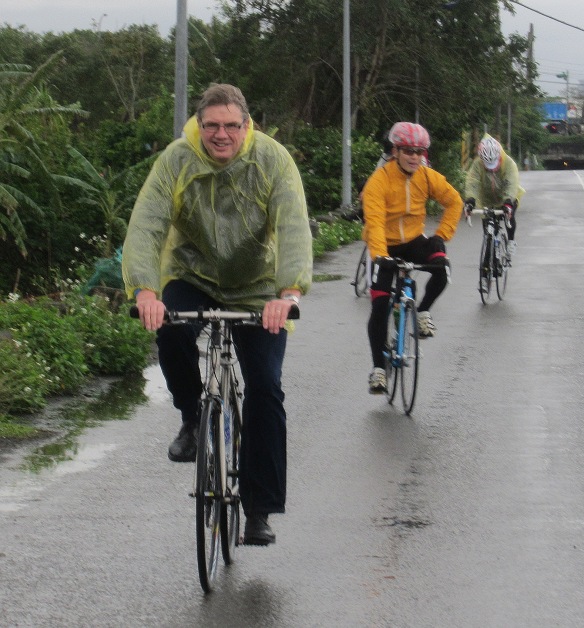 I managed to get out for three decent bike rides on this year’s visit to Taipei, however it was a very different experience to last year. The defining factor this year was water. The downpours which hit us on almost every day could certainly have killed off my enthusiasm, but instead provided a backdrop to this year’s explorations. In the previous two years I didn’t get up into the forested hills that sweep down into the city on all sides and are the product of all that rain. They go up over 1000 metres from sea level within the city boundaries and apparently cover almost half the land area which must make it one of the hilliest and greenest capital cities in the world.

Through this year’s rides I became more aware of how this landscape links with the city and how much the residents value green space and plants which burst into life in the warmth and humidity of the island. And my very final stop on the trip was the steamiest of all – the hot springs district of Beitou which deserves not only a comment as a ride destination but will get a small post of its own to follow this one.

Not all things are publishable however. Our friends from Tern Bicycles put on their Thursday social ride again this year. It was social. It was a ride. As ever their bikes are comfortable and smart with some nice features. But it hammered down with rain. I have a lot of photos that look rather too much like this, and very few that look like the one below,

Their Facebook page has a much better selection, but you get the story. But good company and a bike ride are always highlights in the Idonotdespair world, so I enjoyed it and as ever the clothes dried out. Eventually.Thanks to the Tern team.

My two other excursions were better for sharing and learning about Taipei. 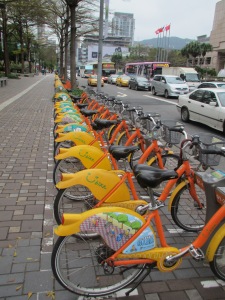 A brief gap in the showers before the Taipei Cycle Show allowed me to grab a Youbike and set off from my hotel. Last year I experienced the city and the riverside cycle paths so my ambition this time was to try and get into the hills I could see from my window.

Xinyi district is mostly known to travellers as the administrative centre, shopping and property hot spot of Taipei, focussed around the City Hall and Taipei 101, for several years the world’s tallest building and an icon of Taipei. The area has modern malls, offices and busy roads. There are cycle lanes and Youbikes too, which is handy. 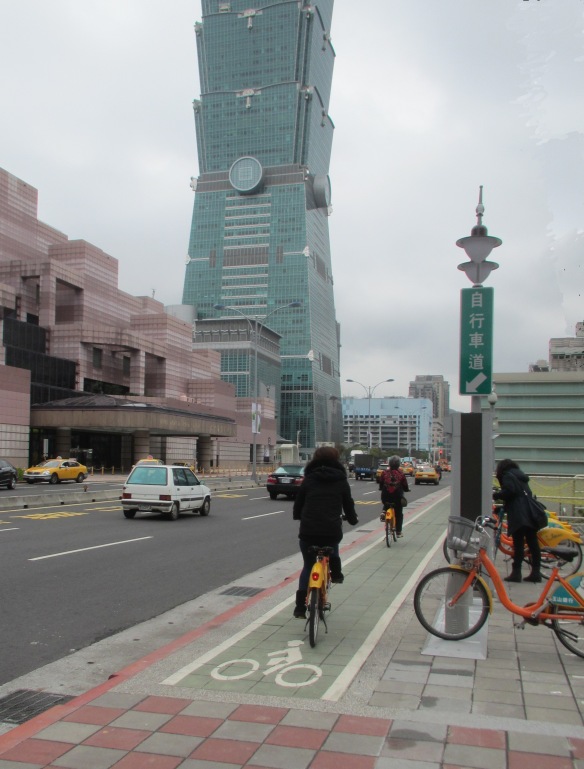 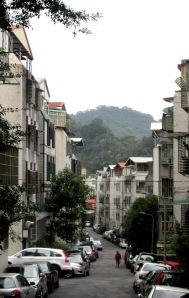 But within just a very short distance by bike the very new developments end and disappear into a maze of residential alleys and back streets which rear up into the steep slopes and verdant forest of the hills. Out of curiosity I heaved myself up some of these steep ramps to the bemusement of the residents who were clearly not used to seeing tourists round here. There are also a number of waymarked and well signed walking trails that were leading up to the mountain tops which showed a considerable local demand for enjoying these green spaces. The Fuyang Eco Park was busy with walkers and joggers, plus it gave me the backdrop to my lovely moment with a Grandfather teaching his granddaughter to ride (see earlier post)

What immediately caught my eye is the way the buildings seem to just merge into the hills, only stopping at the steepest of overhangs.

And not only is the greenery outside, there is clearly a passion for plants with every balcony and doorway having a range of healthy looking plants in pots. Where there was a flat spot these would often be flourishing vegetable patches or in the middle class gardens there were beautiful flashes of colour from decorative foliage and flowers. 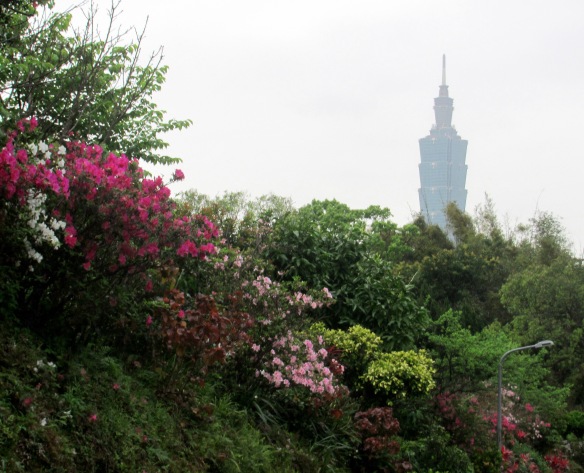 It is such mixture in a small area. Small industrial plots, temples, shacks, apartment blocks and expensive villas catering for all levels of society. Given a different bike and a stronger constitution I might have climbed more of the side streets, but a three hour bimble around the different areas was full of variety.

The traffic was also well behaved too, the streets are narrow and busy which has a traffic calming effect which I appreciated. 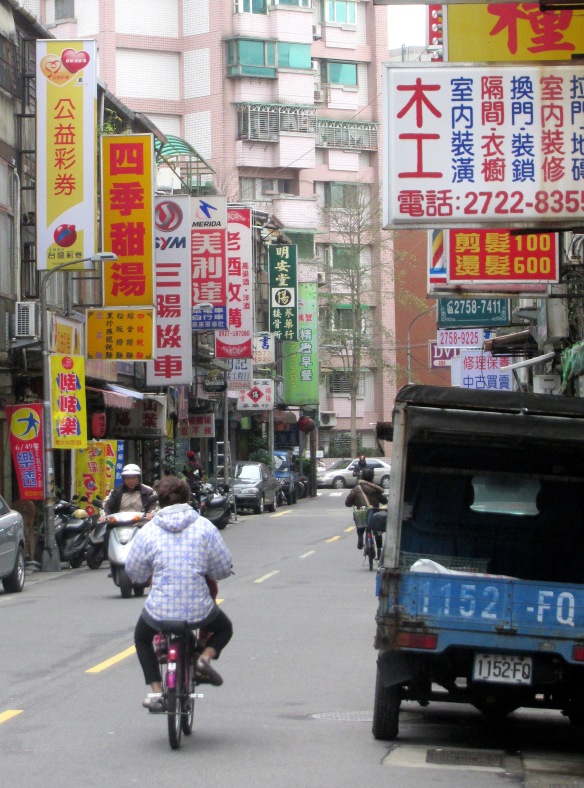 My second memorable ride was on Saturday, the day we left. We were invited out by our new friends at Formosa Lohas Cycling Association www.flca.tw to come and see how they organise their touring rides. The club is relatively new but is making strong progress with a mix of promotional activities for cycling, especially based on cycle touring, events and cycling education for children. As my regular readers know I am very fond of cycling clubs and within minutes of chatting to Development Director Demi Huang and her colleagues it was immediately clear that we were kindred spirits, chatting away about rides, routes and advocacy for ages.

Demi offered us a ride with some of the club’s experienced Tour Guides and we suggested a half day starting in Taipei so that we could also pack our bags and prepare for departure. To be honest, the omens were not good because the rain just bucketed down all morning, but at least it wasn’t cold so Bernhard and I were up for the ride.

Gathering point for a small but hardy group was down on the riverside cycle path where we were kitted out with two nice sporty looking machines with straight bars. Guide James explained our route, a loop of about 20km around the river banks, then up to “Hell Valley” and the Beitou Springs area. The convenient planning board shows that we were to go out into the teeth of the rainstorm and then take a more sheltered line up to Beitou.

The opening kilometres were certainly exposed because our route was not down at water level like other sections of the path that I rode last year. This section sits right up on top of the typhoon defences and looked down on the homes and businesses behind the wall. The views were expansive, but decidedly murky. Clearly Bernhard was at home, this could almost be a Dutch dyke path. 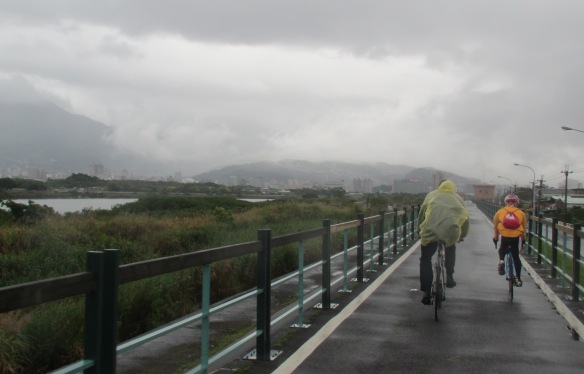 Beyond the walls were mud flats and reed beds that are now popular for bird watching. It was hard to imagine our hosts description of the rivers as the centre for trade with waterside wharves everywhere. Today it is a world closed off from the city.

Once round the confluence of the two rivers we had the wind behind and swept towards a very impressive suspension style bridge. We were struck by the cycle ramps, huge cycle lanes and segregated sections for bikes, scooters and cars.

The view from the bridge was interesting too, it gave an impression of how committed the local authorities are to high quality facilities along these river paths. We could see a fun mountain bike park already completed and under construction a water filled park being landscaped to fit the land space between typhoon defence and river. Clever use of buffer land which will also improve flooding resilience. Now if only other countries were that sensible. 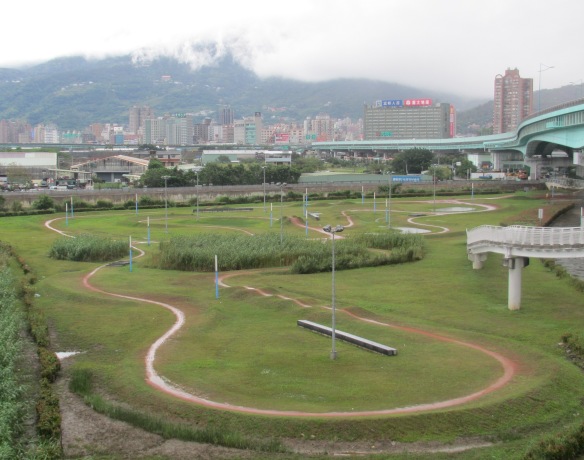 The benefits of local guides were apparent when we swung away from the river bank and headed north through a series of embankments and small roads. Our guides called this “our secret route” and it was a treasure. Almost vehicle free but taking us through something like a garden zone of rice fields and market gardens cutting right into the heart of the city. Several people I have talked to spontaneously started talking about the Taiwanese love of fresh fruit and vegetables and the expertise of their farmers, certainly the quality of the fruit and veg at meal times is outstanding. We were rewarded with herons and cranes foraging in the rice fields as we passed, oblivious to our presence.

It was almost a shock to pop out of the quiet lanes into urban hustle but we had been brought almost to the heart of Beitou by our guides. A gentle climb took us up to a range of sights in this popular visitor area.

The true finish of our ride was the thermal valley itself, which was a mass of steam and smells of sulphur where the hot water gushes up from the volcanic rock at a temperature of almost 90 degrees. All around us streams carried away hot water to be piped into the hotels and bath houses which have been a feature of the area since Japanese occupation from 1895-1945. The main bath house, now a museum, was built in 1913.

Our day finished with steaming hot baths in a hot springs hotel and a delicious meal with our guides, but more of that in my next post.

For now let me just say that once again the friendliness and hospitality of our Taiwanese hosts was unbeatable. The Formosa Lohas guides were knowledgeable and courteous cycling guides and I am absolutely sure that one of their multi-day rides around Taiwan would be a great holiday. James was clearly an experienced leader and Bike Lin (yes that is his name) is the author of two well-regarded tour guides about cycling in Taiwan so I am not surprised they are getting more and more enquiries from around the world. They are going to be popular and welcomed members of the ECF cycling family too.

In summary – another week in Taipei which turned out to be far more than rooms full of bikes on show. Increasingly the international travel media is saying that cycling in Taipei is one of the country’s visitor highlights. I am not going to disagree.