I have recently been shown the animation that SRAM created from their Urban Days event where I was a speaker and participant in May. Previous post here

The weirdest feeling – seeing yourself as an animation.

However I think we have all enjoyed the concept, I think they did a pretty good job of bringing it to life.

The full video with an hour’s very enjoyable debate about the future of urban cycling is also on line. I thoroughly enjoyed the discussions with Stan Day (SRAM), Stephan Augustin (BMW) and John Kock (Springtime). It is a pity that the presentation from Stephan isn’t on line with the others, its the kind of thing the bike world needs to see to remind us that while we advocate the car industry isn’t standing still.

I was in Schweinfurt visiting the German training and development centre for SRAM recently.

My main reason for being there was to talk about cycling advocacy to SRAM’s urban cycling event. However at the end of the two day event we had a few hours before I had to get my train back to Belgium so we were offered a social test ride for a couple of hours. As the weather was delightful and spring-like it would be rude not to, wouldn’t it? So this was an opportunity to take in another region I knew nothing about – Lower Franconia, almost in the centre of Germany.

My recent cycle touring in Germany has been limited to a few sessions around the Bodensee (Lake Constance) where I had seen the evidence of the boom in leisure cycling in Germany. But here I saw other dimensions of that boom that had been less apparent in the summer holiday throngs in the south.

We were taken a short distance out of Schweinfurt into the countryside to a delightful area around Gerolzhofen and the popular rural area of the Steigerwald which has attractive villages and delightful countryside. 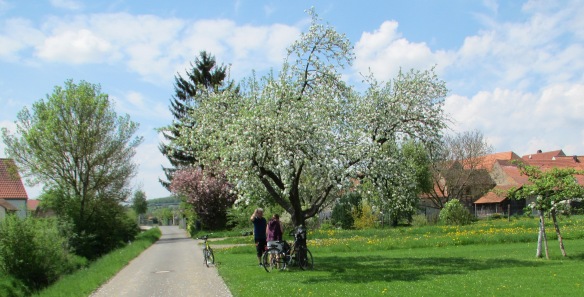 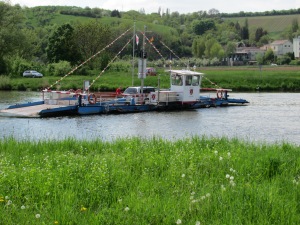 From there we were able to sample the impressive network of  segregated cycle tracks and minor roads for a couple of hours until we ended up crossing the River Main by ferry and enjoying a snack in a terrace café overlooking the river and its busy cycle route in Obereisenheim.

I was hugely impressed by the number of cycle tourists I saw and the facilities we used but on a working day the people who were out were almost universally older (let’s say seniors to be polite). I had heard about Germany’s grey cycling revolution but I had never seen it personified, it was extraordinary that a busy cycle route could be 90% one demographic. 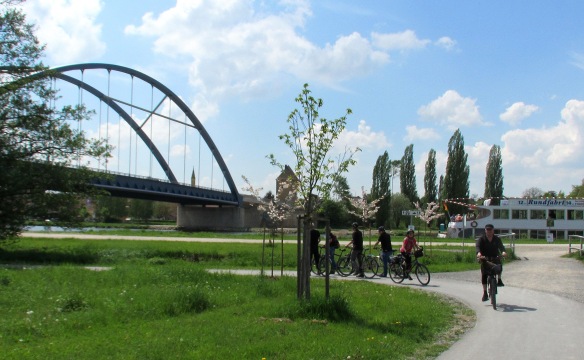 And the next revolution was what they were riding. I have blogged before about the way E-bikes have taken over at the German trade shows and I know that in the last couple of years they have taken a huge slice of the market, but I hadn’t seen where they were being used. Now I could see it writ large – nearly 50% of the bikes we saw were E-bikes, often in pairs. And the lovely little town of Volkach had adopted it so much they had put an ugly E-bike charging station in the middle of their attractive town square.

It seemed a bit incongruous, a glorified luggage locker in a medieval square, but it further reinforced the point that if you want elderly German cycle tourists that means catering for the new E-bike phenomenon.

In fact the café we ended up at down on the River Main only had one customer type the whole time we were there. Cyclists. I know numerous studies have been done showing the economic value of cycle tourists in rural areas but if we could count the percentage of turnover for the Gasthof zum Schiff in Obereisenheim it would indeed be impressive.

All in all an excellent afternoon out, great scenery, nice company and the chance to see a number of cycling trends all brought to life in one place. There is little wonder that cycling is growing solidly in Germany, they really have so many positive things happening they all seem to complement each other.

I am in Schweinfurt, just about as close to the centre of Germany as it gets visiting the European education and product development centre for SRAM.

As it is my first time here I before I came briefly asked a couple of German friends about the place and took a quick look on line.

For those of us who are used to old industrial areas being indistinguishable from words like “grim”, “grimy” and “rust-belt” it comes as something of a delight to bike from the hotel to the SRAM site along beautiful water meadows beside the River Main, completely car free almost all the way including the access roads with good cycle paths.

Yes the factories are there, but commuters are mixing with groups of cycle tourists also passing through on longer excursions in a great environment.

There is much here to learn for the industrial towns of many other countries. It is little surprise that German cycling levels continue to rise year on year if even the most unexpected towns can be small slices of cycling delight.