Our first Fête nationale belge, the Belgian National Day. To be precise our first National Weekend, because this year the 21st July fell on a Sunday enabling a whole weekend of festivities across the country, not least in the centre of Bourgeois, a small town centre/suburb of Rixensart near to where we live.

Special occasion this year because this year the festivities saw the abdication of King Albert and the swearing in of the new King of the Belgians, King Philippe, all carefully choreographed around the national day.

There are several elements that made this interesting from the perspective of a new resident or visitor.

We have been talking about the great sense of community spirit that seems to exist all over Belgium. Not just for National Day either, not a weekend goes by without a succession of fêtes, brocantes (street markets), kermesse, music, food or sports activities.

As I cycled around the countryside on Sunday morning with the local club we saw flags hanging form windows and we even got diverted away from one village to allow the marching band to march down the high street.

town centre. The bands booked were extremely good, most of them normally playing much bigger gigs than the 2000 or so people in the square. Lots of food tents, several bars, thoroughly enjoyable. A stunning weekend too, wobbling back home on our bikes after midnight under a full moon was glorious. 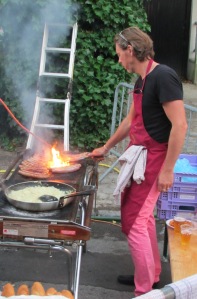 On the TV the swearing in ceremony for the King was an understated affair in the Parliament chamber, not the pomp and circumstance of British royalty or the American President’s inauguration. But from the TV it was clear that there were good crowds all day and the ending with the traditional fireworks over the palace was a good show. Colleagues who live in Brussels took their families along to watch the ceremonial parades and all had a good time by all accounts.

For us it is all part of picking up the flavour of our new home and enjoying our neighbours having a great time and showing their national pride without the undue jingoism or deference to monarchy that so annoys me back home.

As an Englishman I find myself reflecting our whole attitude to national days. There is little doubt there is a cultural cringe in England about our rather dodgy St George’s Day. Celebrations of a military figure who wasn’t remotely English that we share with dozens of other countries and cities. A symbol that has largely been adopted by right wing groups for insular nationalism. Then throw in a bit of further embarrassment about our colonial heritage and the need for nationhood is further weakened. And to be entirely practical having attended many St George’s Day parades as a Scout I can report that April 23rd is no day for a party, it has a habit of being freezing cold if not raining. So we just don’t do national day.

My first experience of a summer national day that showed me an alternative view was when I was about 17 years old and I stayed in Switzerland. August 1st on a hillside above Zurich with the barbeques cooking the wurst, the brass band playing and fireworks going off everywhere was a real eye opener.

I was in Whistler last year for Canada Day on July 1st and that was a lot of fun. Preparations for the Dutch National Day and their coronation earlier this year when I was in Almere, I gather that was a hell of a party lasting several days. The Belgian cycling TV commentators made much of the fact that Saturday was Columbian National Day and they expected a big celebration for the Columbian stage winner because they appreciated national day, just like the French hope for a winner on Bastille Day.

Since we Brits showed last summer that we really do love a big street party with the Olympics and the Jubilee and with the boom in outdoor festivals it seems clear to me that everywhere else seems to have captured the essential trick of celebrating in the right way at the right time. No surprise that 4th of July and 14th July are world renowned national holidays if they allow the country to have a summer day off and a lot of fun.

I think the best plan is to enjoy everybody else’s national days as a celebration of culture and heritage, especially the ones that avoid militarism and bombast, take place outdoors, in the summer with plenty of food, drink and music.

I think La Fête nationale belge, Belgische nationale feestdag, Belgischer Nationalfeiertag achieved that with a aplomb. Merci, dank u wel, dankeschön – as the new King now has to say every time he speaks to avoid upsetting one linguistic group or other.

1 thought on “An Englishman reflects on National day in Belgium”